I have a voltage divider that is driving the gate of a high side PMOS switch. The voltage divider turns the PMOS on once the NMOS is turned on by a 5v logic controller. The PMOS turns on instantaneously, but it takes 9 milliseconds for it to turn back off(9ms for Vout to reach 0v again). At first I thought it must be my resistor values so I changed them to R2=47 Ohms and R1=470 Ohms, but it was still taking 9 milliseconds for the PMOS to turn off.

I think my issue might be similar to this question: Slow PNP turn-off time, how to optimize it

But my R2 should be acting as a pull-up resistor already, so I'm not sure how to decrease the turn-off time of the PMOS. 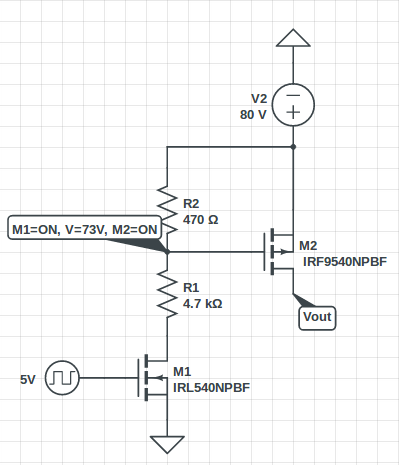 If you just want to test your circuit without connecting the real load to Vout, you can temporarily connect a resistor between Vout and ground. In this case, a 1k\$\Omega\$, 1W, resistor might be a good choice.

And in addition to everyone else's comments, I suggest you also consider whether to manage the inrush current into the 2200 μF capacitance that's connected to node Vout. If you can, perform a SPICE simulation—e.g., LTspice, OrCAD, etc.—on this circuit with the capacitor initially discharged. You'll find that the 80 V power source, and PMOS transistor M2, and the 2200 μF capacitor must endure a sustained inrush current of about 23 A for about 8 ms when M2 turns on. Parasitic inductance in the PCB traces and in the capacitor should also be considered in circuit nodes where large transient currents are present. See also: negative temperature coefficient (NTC) thermistors; "soft start" circuits/ICs.

Not the answer you're looking for? Browse other questions tagged voltage-divider nmos gate-driving pmos or ask your own question.

2
Effect of a transistor on a voltage divider? (or vice versa)
3
Buck using discretes - Driving p-MOSFET using n-MOSFET
2
Drive DC Motor with H Bridge(H Bridge turns off too slow and problem with current monitor)
1
Level-shifted push-pull gate driver speed problems
1
What happens to a MOSFET if i apply voltage between Drain and Source leaving the Gate floating?
0
PMOS Falling Time
0
Bandwidth of voltage divider with PMOS switch
1
Understanding the working of a NAND GATE using NMOS Transistors
0
Power switch PMOS controlled by button or Microcontroller (or both, with an OR circuit)