Class A Audio Amp - Improving Efficiency With A Mosfet CCS

I'm designing a class A audio amplifier but am struggling with the efficiency of my circuit.

I know of 'push-pull' Class A designs, but only want to use a single output mosfet. I would like to hit a minimum of 12 watts using a 24V 1.5A supply.

I know I'm limiting the top of the gate threshold by feeding the gate though the drain of the output Mosfet in order to stabilize the operating point. Would the only way to get the full range to be use separate DC feedback? Would I have to use another active component (like a PNP transistor) from the input?

Also have I got the constant current source arrangement correct? I'v noticed there is a current drop as the draw by the output mosfet falls, is this anything to be concerned about?

The basic problems with your circuit are extreme sensitivity to DC bias point of the upper FET, interaction between DC bias point and gain of the input transistor and lower FET, and low AC gain.

I put your circuit into LTspice and made a few changes to improve DC stability and AC gain:- 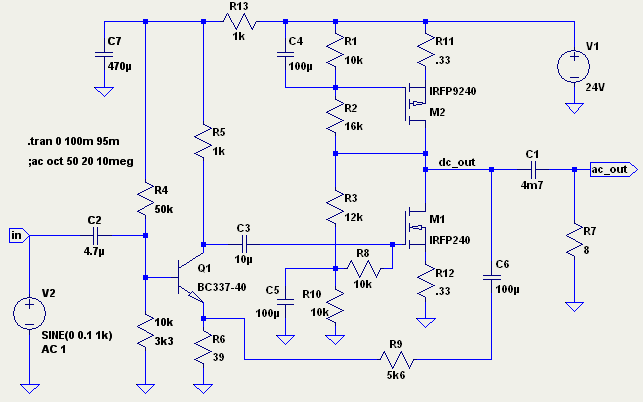 To remove the interaction between M1 and Q1 biasing I AC coupled the signal through C3, with R8 isolating the signal from M1's bias circuit (which I decoupled with C5 so it wouldn't affect the AC gain). I also applied negative feedback to M2's bias with R2, and decoupled it to AC with C4. Finally I added small Source degeneration resistors (R11, R12) to further stabilize the FET bias points.

With these changes the AC gain jumped to 47dB which was more than I wanted, so I applied a small amount of negative feedback to the Emitter of Q1 (via C6 and R9) which brought the gain down to 39dB. This also improved the bandwidth and harmonic distortion figures. Frequency response is now flat within 1dB from 20Hz to 100kHz, and distortion is less than 5% at a peak-to-peak output voltage of 17.2V.

Power supply ripple rejection was extremely poor at +10dB (yes, it was amplifying it!) so I added a filter (R13 and C7) on the supply rail to the input stage, which provided -27dB of ripple rejection.

Even though this circuit looks good in LTspice, in practice it would probably still need trimpots to adjust the bias for individual FETs. I tried changing the bias resistor values by +- 20% and it didn't upset the bias points much. However each FET dissipates 14~16W of quiescent power, so their operating points may drift significantly as they heat up.

This is where we come unstuck. A class A amplifier cannot achieve over 25% efficiency without using a transformer or choke. With an 8 ohm load and 24Vpp sine wave the maximum possible undistorted output power is 9W, with a peak load current of 1.5A. Since in Class A peak load current = supply current, this requires 24V*1.5A = 36W of input power. 9W/36W = 25% efficiency.

In practice it will be even less efficient due to voltage drops in the output transistor(s) etc. In this circuit the maximum output power (with <5% distortion) is only 4.6W, from an input power of 24V*1.38A = 33W. Very clean sound, but an enormous waste of energy and a lot of heat to get rid of.

Not the answer you're looking for? Browse other questions tagged transistors mosfet amplifier audio efficiency or ask your own question.