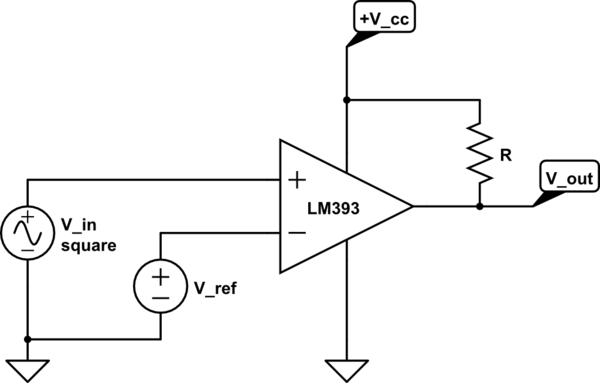 As I built this circuit on breadboard I noticed that \$V_{IN}\$ has to differ at least few 100 mV in order for comparator to switch between \$V_{CC}\$ and 0V. However such behavior is undesired since input square signal's amplitude varies only few 10 mV between HIGH and LOW states. So I set \$V_{REF}\$ in the middle between two input voltage states, but comparator didn't change its output.

But shouldn't the comparator change its output even for slight voltage difference between two inputs? According to equation, which applies for differential structure amplifying devices such as comparator and operational amplifier, my statement is correct. This equation goes as follows:

Also, if I would design a simple differential structure amplifier with discrete components, which would most probably have much smaller open-loop gain and other deficiencies, a slight voltage difference between two inputs would result in much greater voltage difference at its output.

NOTE: I also tried replacing this integrated comparator circuit with operational amplifiers TL072 and LM358, where both of them indicate similar behavior.

Any ideas if this behavior is normal to all operational amplifiers and comparators? How else could I compare input signal, which varies only for few 10 mV if not this way?

As others pointed out, this chip requires the input voltages be at least 1.5 or 2 V below the positive rail, and you don't seem to be following this restriction.

In comments you asked,

Why? Is there some kind of rule I should know about comparators? Why exactly 2V less than Vcc?

Because the datasheet says so:

The limit is 1.5 V below Vcc at 25 C (as shown above) or -2 V over the full operating temperature range (shown in the next table in the datasheet).

If your next question is, "But, really, why?", have a look at the schematic in the datasheet: 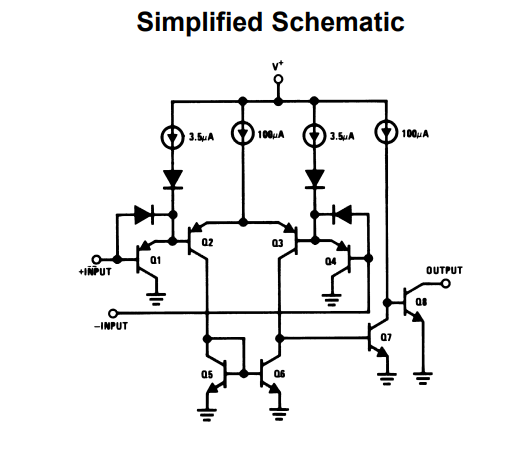 If the input voltages get too close to the positive rails, the current sources shown will go out of regulation, so the circuit will not work as it does when biased properly.

Not the answer you're looking for? Browse other questions tagged operational-amplifier comparator switching diff-amp square or ask your own question.

1
Why does an diff-amp being fed by two separate op-amps with low input resistances distort the signal on the inverting input?
1
BJT schmitt trigger has linear behavior on negative swings
1
LM139 Comparator question
1
Can this comparator input exceed its supply voltage?
1
How can I use a comparator in a circuit?
1
Analog Comparator Design
0
Comparator loses voltage when connected to mosfet
0
When to put resistor on comparator input
0
LM393 comparator how to use?