Does it matter if a fuse is connected to the negative or positive terminal of a battery?

I am currently going through the conundrum of where to place a fuse in my DC battery-powered circuit to protect the circuit components and the DC battery. I've been googling for a definitive answer, but I came across diverging opinions... Which one is correct and why?

Also, during my research, I came across a post that advised to connect a fuse at the positive terminal since it would protect both circuit and the battery, but if the fuse is connected to the negative battery terminal, then it only protects the battery. Is this true? It doesn't make sense to me.

So, I can't figure out which one is correct and why? I made a simple block diagram to illustrate my question. 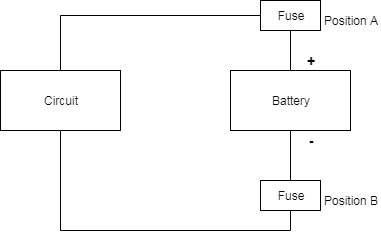 [Should I] connect the fuse to the negative terminal of the battery since it's where the actual flow of electrons originate which is opposite to the conventional flow of current from the positive terminal?

Forget about electron flow. It only causes confusion such as in your thinking. Electrical current flows in a circuit in the same way that a bicycle chain flows around. Any mobile charge carriers that leave one terminal of the power source must return on the other. A break anywhere will stop current flow.

Again, for circuit analysis it is normal to use the conventional current flow from positive to negative. Don't worry about electrons, just think of it as charge moving from + to -.

Since the negative terminal of the battery is normally considered "Ground" or "Zero Volts", a fuse in the negative lead would leave the rest of the circuit "hot" - usually Not a Good Thing.

Recommended practice is to place the fuse near the positive terminal of the battery, so the whole circuit will be dead if the fuse blows.

(Of course, if the positive terminal is considered Ground, place the fuse near the negative terminal.)

I would add that cars are an exception here: in most low-voltage applicatons the battery is not directly connected to the conductive parts such as casing or heat sinks, and therefore it doesn't matter where you put the fuse.

Don't get the impression that connecting the battery the way it is done in cars is a good idea: unless you have to deal with high currents or saving on wires by using the metal case as a conductor is essential, keep your electrical appliance isolated from the case. It will help to prevent electrochemical corrosion should your device get exposed to moisture or water, and a single short to mass will be a non-issue. A blown fuse is better than a fire, but not having to replace the fuse is even better.

Think about your failure modes

You have to ask yourself, "What happens if one of the wires or some of the electronics shorts out to something else?"

Suppose I'm using LED turn signals, and to save wires, I hook both turn signals to the same pair of wires. Brown wire + means left signal. Blue wire + means right signal. Fuse both, or fuse the source of my reverser circuit.

It's not a perfect analogy but you can think of the positive terminal like a suction inlet, rather than the negative terminal like a blasting hose. Fuse is like a normally open valve. If the valve closes (fuse blows) and its near the suction inlet, the rest of the tube has no negative pressure, so a hole anywhere along the tube won't result in a hissing leak. If it's near the end of the tube (negative terminal), a hole at any point will. Place your fuse so that the least amount of "tube" possible has negative pressure.

On a vehicle there will be a fuse on the negative and positive leads for anything not using the chassis as the return/ground/negative lead. Well there are some uses of a positive ground but that's rare outside of telephone gear. Generally the negative post on the battery is grounded to the chassis of a vehicle.

The reason for this was touched on in other answers, the need for two fuses is to cover some known failure modes. In automotive applications the answer is that with a large load, like the starter motor, a failed ground on the large load can find a return path through the vehicle chassis, through the device chassis, down the small ground wire, to the battery. Without a fuse on that negative lead a 500 amp starter could be grounded with a 12 AWG wire to the battery. That wire would then become the fuse and burn up.

Others mentioned the additional hazard of the antenna becoming part of the circuit on any kind of radio. Having fuses on both positive and negative will protect the radio and wires on most failure modes. There's going to be some rare failure modes not covered by the two fuses. For those hopefully a properly installed fuse for that circuit path protects the battery, wires, and people around them.

You are going to get seemingly conflicting information if people are discussing different environments. As a ham radio operator I will wire a DC supply differently at home than in a car. If we look at AC circuitry in a home as an example there is only a circuit breaker on one terminal, the supply or "hot". In fact there is a redundant return path, ground and neutral, to make doubly sure that path is not broken. There's a different philosophy on safety, and that calls for a fuse only on the supply path.

To decide what is safe one needs to consider failure modes. I guess that it is possible for a failure mode to conflict on where a fuse needs to be, or if a fuse is appropriate means to prevent damage or injury. To address the failure of a ground fault, as an example, there needed to be something other than a fuse to detect that and act on it. Such a device is called a ground fault circuit interrupter, or GFCI. That's getting out of scope though.

The point is to consider the environment, the failure modes that creates, and what to do to protect against them. I gave examples on where one fuse is enough, and where it can take two.

We must remember that current flow is actually the flow of electrons from negative to positive. Therefore the negative terminal supplies the energy to the circuit. (Energy being supplied from the positive terminal was how things were thought to work before electron flow was discovered). I suggest therefore that overcurrent protection should be as close to the negative source as possible.

Not the answer you're looking for? Browse other questions tagged battery-operated fuses or ask your own question.

0
Switch placement on electronic circuits on the positive wire
0
Why a double fuse is used in some applications?

9
Can a fuse be placed after a load?
0
dual stage charger, is fuse needed?
8
Did I choose the correct fuse for my USB powered circuit?
0
Can I connect Battery positive terminal directly to MCU ADC input Pin?
1
Using a dc power supply instead of batteries
2
+ and - 12 V power supply with 12v Batteries, How to make a ground rail with both batteries
1
How to fuse batteries connected in parallel?
1
Do I need to fuse batteries in parallel?
1
Selecting right fuse for the short pulse application