Is back emf inductance in a ignition coil circuit symmetric for on/off cases?

I was trying to understand how an ignition coil circuit works practically, and came upon this website explaining the behavior of an ignition coil when subjected to changes in voltage: http://www.learnabout-electronics.org/ac_theory/inductors.php

This voltage will however now be much larger than the original supply voltage; this is because the amplitude of a voltage induced into a conductor is proportional to (among other factors) the rate of change of the magnetic field. At switch on, because there were two opposing voltages changing, the supply increasing and the back e.m.f. decreasing, the rate of change was slowed down. However at switch off there is no supply voltage so the magnetic field collapses extremely quickly causing a very rapid rate of change and therefore producing a very large voltage pulse.

What bothers me is that according to my rusty EE knowledge, the equations governing inductance

should lead to symmetric behavior when a switch is closed and opened. In fact, according to my understanding, the voltage spike shown in the following graph should be in the other direction, as it would oppose the decrease in current. Am I understanding inductors incorrectly, or is there in practice much more to the topic which simple EE theory does not cover? 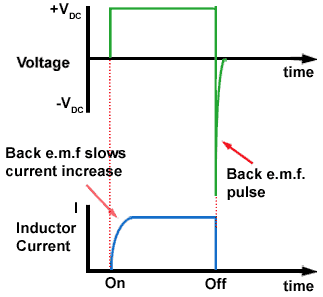 No, it isn't symmetric in that sense.

In a circuit that consists primarily of inductance and resistance, there's a time constant associated with its transient response1 that works out to

In the igntiion circuit, you basically have a battery, a switch and the ignition coil in series. \$R\$ represents the total resistance of all three. Two of them have constant resistance, but the switch varies between very low and very high resistance.

Therefore, since the voltage is determined by

1 The transient response is of the form

Current limit is defined by V/DCR of coil and is not saturated. Then L/R has slow rise time and fast flyback as R opens.

X yes it is basic EE theory with inductors and flyback effects amp-seconds input = output minus losses in cable to reduce EMI on AM radios.

But we do no integrate to infinity, your engine warranty isn’t that long. ;)

During the off-to-on transition, the inductor voltage is determined by the battery voltage. That causes the current to ramp up at a specific rate.

During the on-to-off transition, the battery voltage is irrelevant: it’s not even connected. The voltage can rise higher can higher until it drives the spark.

Not the answer you're looking for? Browse other questions tagged inductance back-emf or ask your own question.

2
What means coil inductance (h) for relays?
2
Back EMF of an inductor in a DC circuit?
2
Induced voltages and flux within a transformer and their polarities
3
How can I describe mathematically what is happening in my home made LVDT variant?
0
Lenz's law and the magnitude of opposing fields
0
BLDC Calculation for Back EMF
0
Scenarios where Inductor back EMF would result in damage of circuit or component
1
Back EMF in a transformer with an external power source to the secondary coil