My sister is building a display sign, and wants to have several "marquee letters" lit up on it. Like this one: 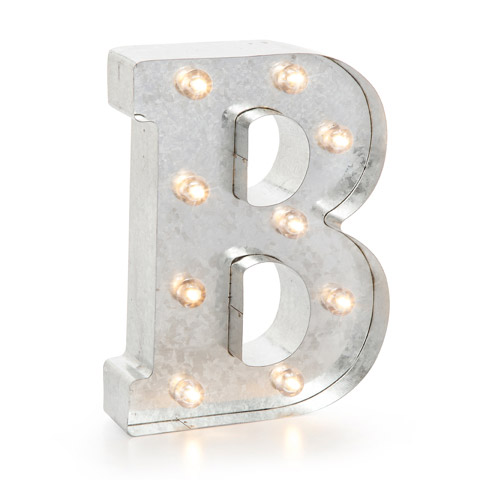 She bought 9 letters like this, and they all run off two AA batteries, and internally they're just a string of 7 to 9 LEDs hooked up in parallel with no resistors, just direct to the battery compartment running 3 volts.

So, she wants me to remove the battery compartments and wire them all together (74 LEDs in total) so they can all be powered off one power supply, and I feel like this is a little outside of my electronics knowledge. It would basically be 74 LEDs in parallel, and I don't have any concrete specs except they light with 3 volts across them.

In my past dealings with LEDs, it was always understood that there should be some current limiting resistor at play to protect them. There's none there now, should there be?

Also, if I try to recreate their current setup would I get a 3 volt power supply? Would it be wiser to use something larger and if so how should it be wired? Much of what I find on google on the subject is a bunch of info about choosing power supplies for 12-volt LED strips, but this is a bit different.

Could one of you be so kind as to help me understand? I hope I'm overthinking a simple circuit, I just need a little help sorting it out.

Would it make more sense to pull out the existing LEDs and insert a string of LEDs that's designed to plug into an outlet?

Get a single 6V wallwart and assume each letter is drawing 140-180 mA of current, so you find one that can source enough current for 9 letters. Put a 5W resistor that can drop 6V down to ~3 V and give you ~1.6A (a real big 2 ohm should work for that, or even better a couple of 5W 5ohms in parallel), noting that you're gonna dissipate a full 5W in that resistor) in front of the whole thing. If relying on one big current regulation resistor bugs you because the not perfectly matched parallel loads will vary a bit in brightness, tailor your resistor size to the number of LEDs, noting that each LED wants up to 20mA. Same principle.

The simplest way is wiring a 3V DC power supply to the battery terminals. The leds are white and nominally take 20mA at 3.2~3.6V, so by under driving them with 3V, they could avoid using a resistor. But they often do have a resistor in series with the parallel leds.

You can figure out how much current they are using by taking a multimeter with an ammeter/current sensing feature, and measuring the power draw with fresh batteries. Then multiply that by 9 to get the amount of current a 3V power supply would need.

Alternatively, a 5V USB power supply with a regulator down to 3V would work, and you can find usb supplies everywhere.

Basic video on how to do this. https://www.youtube.com/watch?v=r4f0Fi_fCyE

I'd suggest you do NOT connect multiple characters in parallel.

The LEDs used in each character (7-9 of them) are in all probability matched to some extent and CAN be driven directly from the AA batteries without damage.

If you connect multiple characters in parallel the LEDs in the different characters may not be closely matched enough, and you'd see a large variation in brightness between the LEDs in each of the characters.

I'm not sure what tools you have to investigate, but we can surmise the likely operating characteristics knowing how the characters are powered.
If we assume that the characters use Alkaline batteries and the lifetime is only say 5 hours or so of continuous operation then from the Alkaline battery datasheet (Duracell MN1500 AA Alkaline) we see the following: 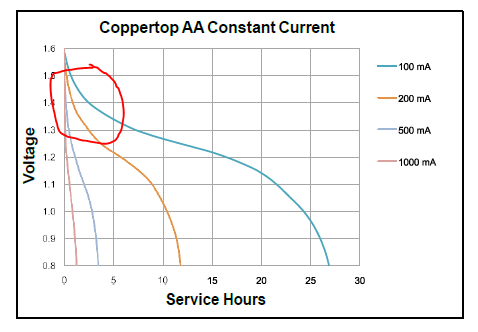 I assume that the LEDs are white, and these will have a Vf of around 3.2-3.3V at 10-20mA. A typical white LED would have Vf characteristics like this: 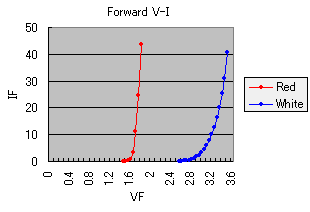 Since the highest voltage from the AA cell is about 3.3V, you can directly drive the LEDs without any series resistor. The current may start at close to 10mA but as the battery ages the cell voltage drops and so the LED current drops.

If you have 7-9 LEDs in each character then you can expect the battery current to be approximately 70-90mA for each character depending on the number of LEDs.

There are potentially several ways to implement a solution using a single power supply, but I'm going to suggest one way that may be a simple exercise for you.

From our favorite supplier search for a DC-DC converter based on the LM2596 with a digital voltmeter built in. They will look like this and cost somewhere in the $2-3 range: 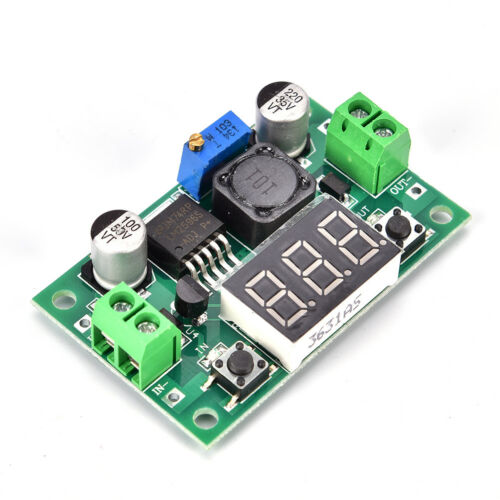 Also source a 12V 2A power supply, the typical Walwart or block types. If you search for an LED 12V supply you will find what you need. While I've suggested a 12V supply, you could use almost anything over 9V (to keep the DC-DC converter happy). You may just have an old laptop power supply (typically in the 15-19V range) and even this would be more than adequate.

If you connect the power supply to the DC-DC converter your can turn the adjustment potentiate to get the required voltage to run the LEDs.
I've already said it would be bad practice to put all the characters LEDs in parallel so to fix this problem you need to put a series resister in place for EACH character. 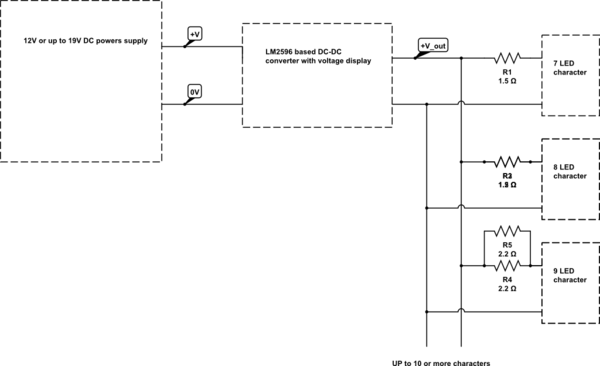 Adjust the DC-DC converter to about 3.1V initially, the LEDs should all come on at least dimly. Slowly increase the voltage up to about 3.4V and the characters should all be reasonably bright and of equal brightness.
Since we don't know exactly the current flowing in the LEDs you may have to adjust the voltage to meet your needs, however you should not need to go above about 3.5V to get your required result.