What are these transistors doing and how are they working in this VU Meter?

I was thinking of making KITT's voice box from Knight Rider, which is essentially a VU meter. I did some researching and found an appropriate IC, LM3916,

and some LED Bar Graphs. I actually ended up finding what seems to be an old schematic, in this link (it uses the LM3915). There's a group of PNP BJT's in it. Schematic 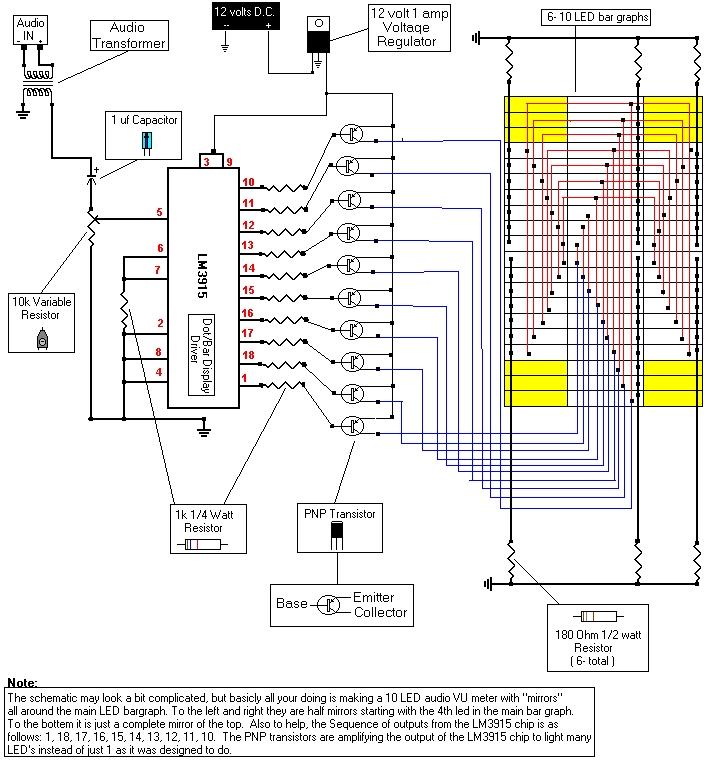 It's a bit hard to follow, I made my own so I can follow the wiring a bit better, if you would like to look it's below(It's missing the resistors in the LED bar graphs, it should be 180ohms like the original schematic) 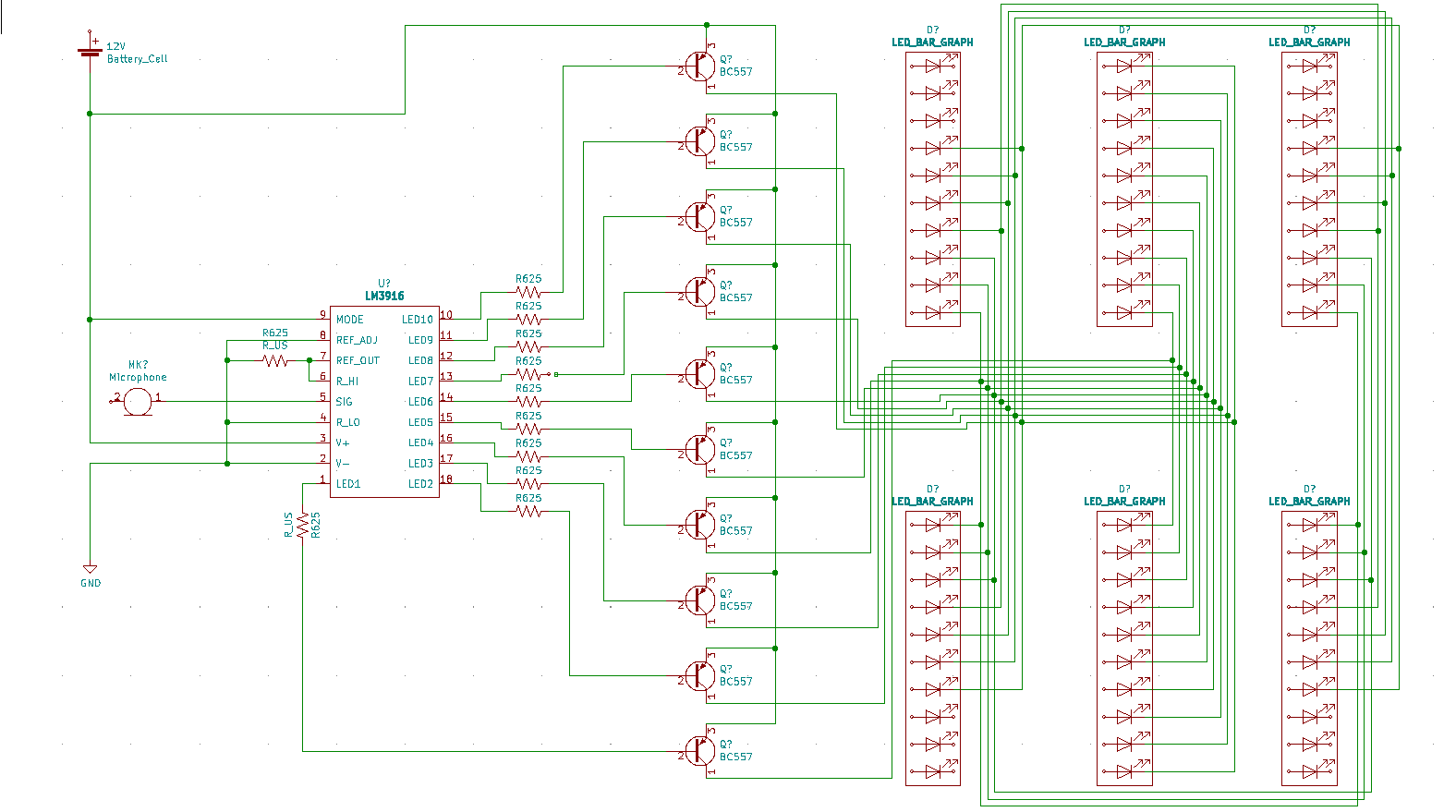 . (My design uses 625ohms due to a mistake I made reading the datasheet. They should be 1k)

The author writes the BJT's are for to light multiple LED's (since each LED output on the chip is suppose to only supply 1 LED). So essentially he uses the IC to select between the transistors which will turn on the LED's.

I'm confused on how they are doing this. It's a PNP BJT. According to the LM3915 datasheet, the current this IC will be outputting at the LED outputs is 12.5mA, since 12.5V/1k. Then 12.5mA going through the 1k resistors at the outputs give 12.5V again.

Second it should be Ie = Ib+Ic, meaning the base current should be flowing out, but the current is coming in from the IC.

I tried making a simple overview of 1 LED, not sure if it's correct 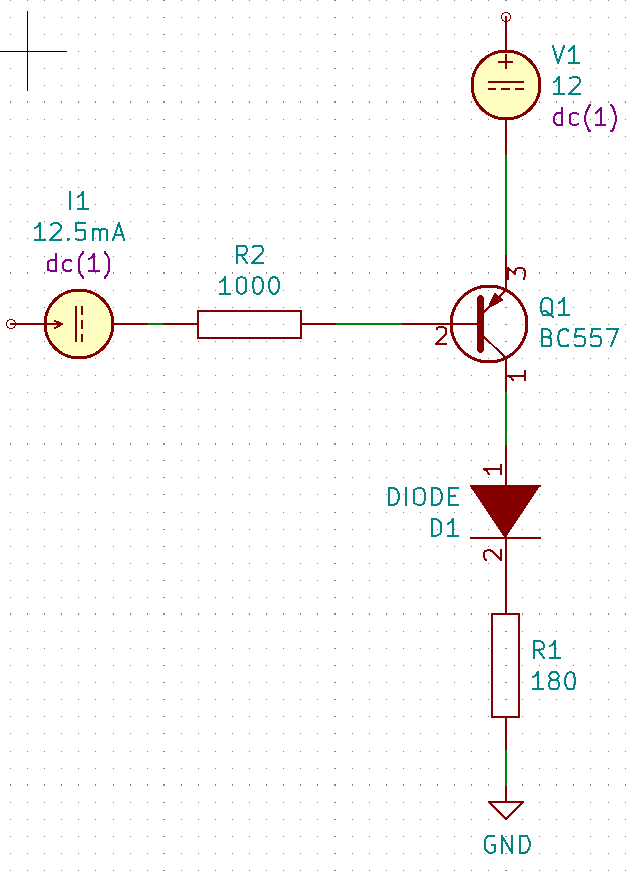 Basically there's a lot of guess work required for that specific schematic which lacks part numbers or specs. But between it and the LM3915 data sheet and app notes for LM3915 circuits, you can figure out how to replicate it with parts you have.

Sidenote: Since the V+ voltage is likely 5V, the current through the base resistor would actually be 5V - 0.7V ) / 1000Ω = 4.3mA, which with a gain of 25~30 is plenty to put the transistors in saturation for the <100mA the 6 leds per output would take. The output current isn't too critical here as the transistors are just being used as an on/off switch.

I built a project with LM3915s almost 40 years ago. The part has a programmable current sink so you can connect LEDs directly to it. Depending on the color, you can put 4 or so LEDs in series at 12V. Four red LEDs for sure, since that is what I used. More than this, you can use a PNP, but you should still put some in series so you don't waste a lot of power in the resistor. For your design you seem to want 6 LEDs in each circuit, I would put 3 in series, each path needs a resistor. The transistor will saturate, so you need to limit the current. 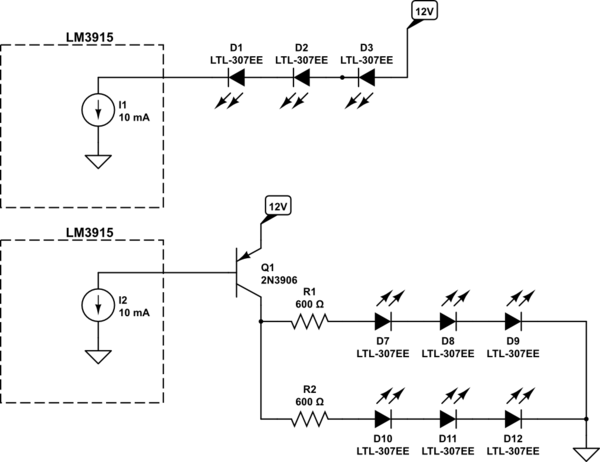 Note that the original manufacture doesn't make these anymore, you are most likely buying a Chinese clone. Therefore, they may not match the datasheet exactly.

I'm confused on how they are doing this. It's a PNP BJT. According to the LM3915 datasheet, the current this IC will be outputting at the LED outputs is 12.5mA, since 12.5V/1k. Then 12.5mA going through the 1k resistors at the outputs give 12.5V again.

Yes, but you've fundamentally misunderstood the output stage of the LM3915. It does not source current, it sinks it. That is, the output pins look like an NPN transistor to ground. It is intended to work by effectively shorting the output pin to ground in order to draw current from a higher voltage. (Actually, it works as a current sink rather than a short, but this is a detail.) To get an idea of this, the first thing you should have done was looked up the data sheet. Notice how the LEDs are connected in the Typical Applications (page 2).

With this said, this is actually a pretty crappy circuit. Each output pin, when active, will attempt to pull something like 15 mA from the bases of the PNP transistors. Since the LED current will be something like 55 mA (12 volts minus about 0.2 volts (PNP Vce) minus about 2 volts for the LEDs, divided by 180 ohms), a base drive of about 5 mA would be quite adequate. A good rule of thumb for driving BJTs as switches is to use a gain of 10. If the data sheet were followed with a base current of 5 mA calculated, each output would cause about 60 mW of power dissipation in the 3915 (12 volts times .005 amps), and the worst-case power dissipation in the chip would be about 600 mW, which would only occur when all segments are lit. For a normally-operating bar graph, this simply does not happen for any period of time.

Second it should be Ie = Ib+Ic, meaning the base current should be flowing out, but the current is coming in from the IC.

Yes, Ie = Ib + Ic, but base current flows out from the base of a PNP. Base current will be a bit less than 12 mA, and LED (collector) current will in fact be about 55 mA, for a total emitter current of about 67 mA per lighted segment.

I tried making a simple overview of 1 LED, not sure if it's correct

Almost correct. The current source is pointing the wrong way. Furthermore, the 3915 output stage is not a perfect current source. so the base current will be less than 12.5 mA. In practice, the left-hand side of the base resistor will appear to be at a voltage of about a volt or so.

Well-spotted. The 180 ohm resistor is a bit underpowered, as it is a 500 mW unit being asked to dissipate 550 mW. However, this is probably not an issue, since a 10% overpower condition is not usually fatal. Manufacturers do build making conservative assumptions about how the resistors will be used. If you put this in a small, closed box with little airflow, there may well be long-term problems, since the resistors will get hot. However, as I commented earlier, audio bar graphs spend most of their time with only one or two segments lit, so the heat will spread out some.

But, like I say, this is a pretty crappy version of the circuit, and should be a lesson to you about blindly grabbing circuits from the internet.

Not the answer you're looking for? Browse other questions tagged transistors bjt pnp saturation meter or ask your own question.

1
Serial Data Input through Microcontroller to Output Voltage
0
TLC5940NT + 12v 5050 led strip
2
Circuit Diagram: How are these capacitors turning on these transistors?
1
Not sure what two PNPs are doing
4
How to distinguish PNP and NPN transistors?
2
High side transistor switch with 9V LED driver
0
Enable one or two of the same output via switch (minimalist schematic)
4
How are the PNP transistors biased in this microphone circuit?
0
Are the transistors in this 8x8x8 LED cube design doing what I think they're doing?