Is it a mistake in AD725 and other datasheets?

During my research of the RGB video and encoders I see two ways chip manufacturers/circuit designers treating the outputs (several examples below): 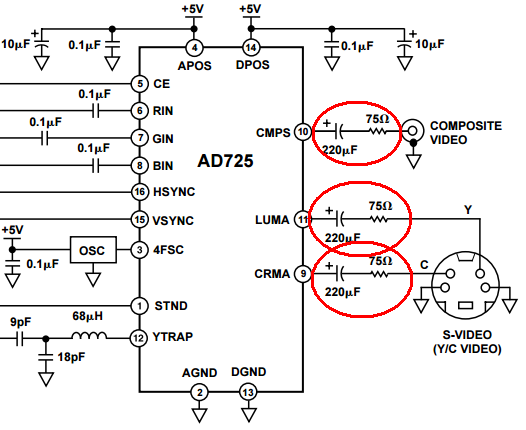 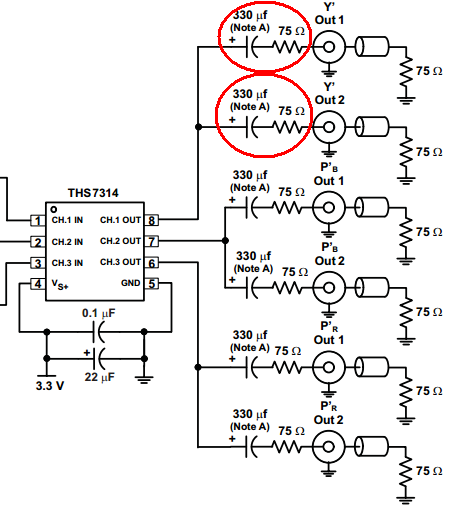 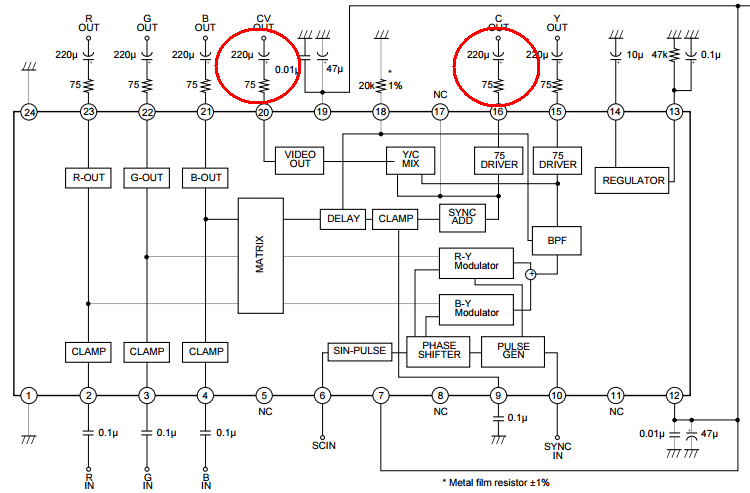 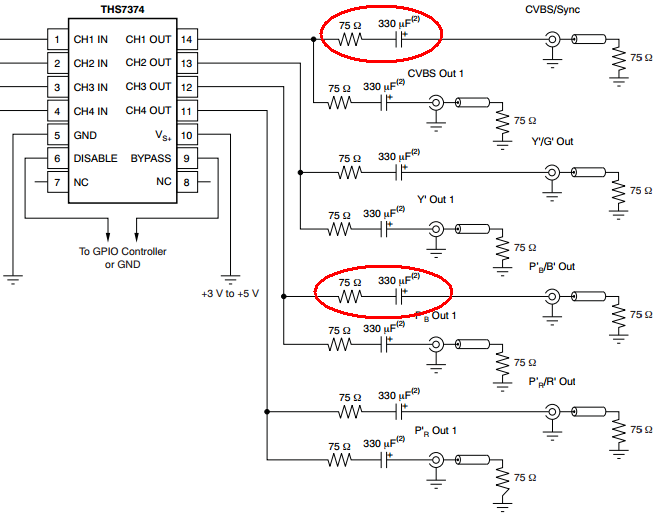 From the first glance the function of both configurations must be the same: connection is in series thus order must change nothing. But it seems this point of view is wrong.

Datasheets of CXA1645 and THS7374 state the following:

Use care when connecting an external resistor to the 75Ω driver output pin. A capacitance of several dozen picofarads at each pin may start oscillation. To prevent oscillation, design the pattern so that a 75Ω resistor is mounted near the pin.

The stray capacitance appearing directly at the THS7374 output pins should be kept below 20-pF. The best way to ensure this limit is maintained is to place the 75-Ω series output resistor as close as possible to the output pin. If an output capacitor is used, as discussed in the next section, then it should be placed after the resistor.

Datasheet of the THS7314 does not mention these requirements.

Datasheet of AD725 states the following:

The output amplitudes of the AD725 are double that required by the devices that it drives. This compensates for the halving of the signal levels by the required terminations. A 75 Ω series resistor is required close to each AD725 output, while 75 Ω to ground should terminate the far end of each line.

I am sorry, how I can place this resistor close to the output if there's huge electrolytic capacitor between the resistor and the pin?

Well, I would not be so much worried about the order and this uncertainty, but THS7314 states the following:

Do I understand it properly that putting electrolytic capacitor to decouple outputs before series resistor is wrong design approach? And the order matters?

What is the correct approach/order of components, and why?

The R value is always 75 and prevents the C value decreases slightly due to spectral range is higher for Chroma.

The series electrolytic capacitor is not a "load" — it simply serves to block DC while passing the huge bandwidth required for video signals in general.

In general, the order of components in series doesn't matter, but in some cases, specific ICs might be sensitive to 2nd-order (parasitic) effects. This is the reason for the note on the THS7374.1

You can use the order shown there for all of the other circuits, too.

1 However, note that the polarity of the electrolytics shown in their diagram is wrong! The positive end should be pointing toward the IC.

Not the answer you're looking for? Browse other questions tagged driver capacitance video decoupling or ask your own question.

1
Capacitive touch insulation problem?
0
Video compression using low power processor
3
How to switch composite video signal inputs to one output
1
Trying to split the current output of an LED driver
4
AD725ARZ wrong colors
0
How to scale down voltage of the the video signal without affecting input wire impedance