Why can RLC resonance be dangerous for electronics

There is a lot of information about RLC circuits and resonance, and many times it is mentioned that when a series (parallel) circuit resonates, a really high voltage (current) can be found across the inductor and the capacitor and this can lead to faults of components.

Please let's assume that the capacitor and the inductor have no problem in sustaining the voltage across themselves and they don't break because of it. The issue is how this can lead to problems for other components in the circuit.

A fairly common example of when RLC circuits can produce an excessive voltage is a 2nd order low pass filter used in conjunction with a voltage regulator. I've fallen foul of this myself so I know it can be a problem.

Upon removing the short on the output, the RLC filter did the normal thing and produced an under-damped ringing waveform whose peak voltage exceeded the input voltage rating for the regulator. The regulator fried. It took a little while to figure out because it was initially assumed that the original short circuit on the output did the damage (but it didn't). So, what was it all about: - 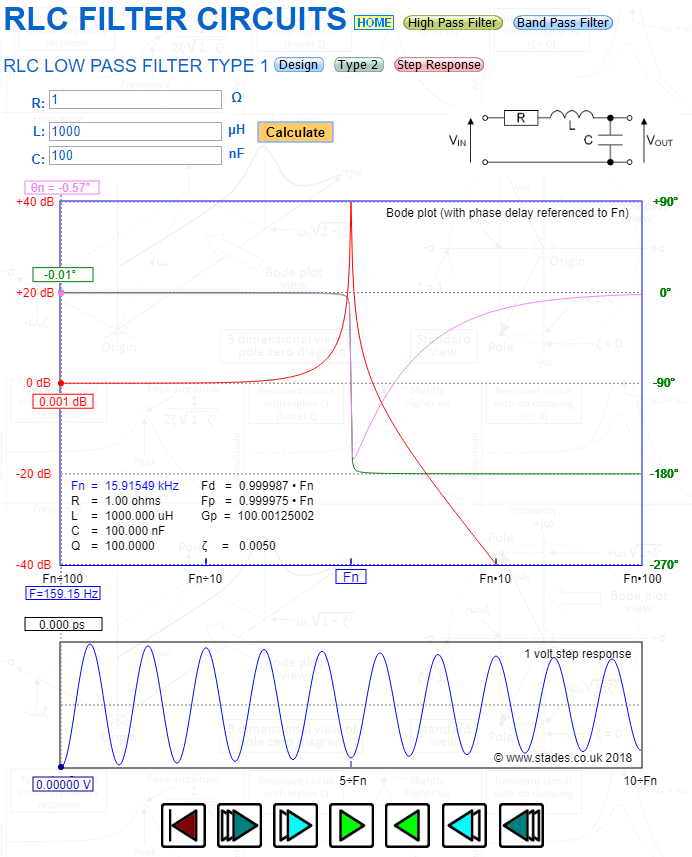 The circuit above was the type of filter used and the simulation shows the problem. In the bode plot there is very high gain at 15.9 kHz (40 dB) and this translates to a voltage multiplication of 100:1. In the transient response clearly a 1 volt step produces nearly a doubling of the 1 volt at the output.

This is just one specific example.

Consider that the circuit board itself and/or any insulated wiring has a breakdown voltage. After breakdown, any nearby components might be adversely affected (exceed specified maximums on random pins, etc.)

The high Q of Series RLC circuits amplify current according to f and Q= 2pifL/(DCR+ESR+Rs) ratio.

Parallel RLC circuits amplify voltage at fo, according to shunt R for high Q=R/(2pi*fL) at fo.

Not the answer you're looking for? Browse other questions tagged circuit-analysis passive-networks resonance or ask your own question.