How does a capacitor affect the flow of the current?

I understand that the capacitor is like a secondary DC source when it's almost fully charged. What I don't understand is the way it behaves in a circuit.

It discharges itself when it's full or when it is the only DC source in a closed circuit? 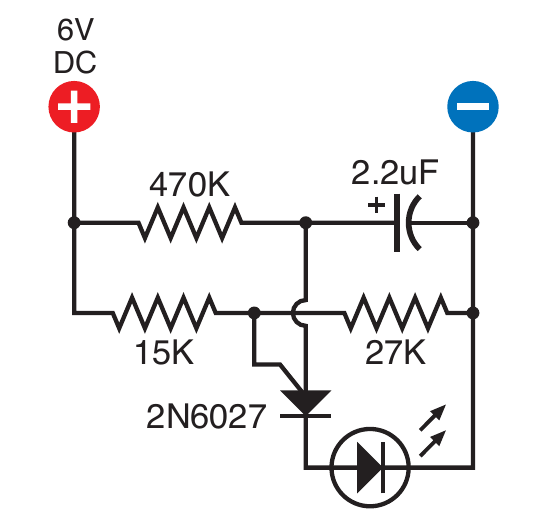 The Programmable Unijunction Transistor (PUT) and the capacitor are connected in parallel, thereby the voltage is the same for both of them. But I don't see why the PUT depends on the capacitor. Even if the capacitor acquired the entire current till it gets full, wouldn't the electrons go from the DC to the PUT directly?

There are two things going on, which is no doubt part of what is confusing you.

The PUT stays off until some threshold voltage between it's anode and cathode is reached. Then it turns on and it stays on until the current through it drops below some threshold. So the PUT is a 2-state device.

A capacitor tries to hold its voltage, and the bigger the capacitor, the better it does. The rate of change of voltage on the capacitor is equal to the current into or out of it, divided by the capacitance.

So here's what happens in that circuit. I'll start with the PUT off (not conducting current) and the capacitor discharged.

* Which is pretty hard on the LED -- it would be better to put a resistor in series with the poor thing. This circuit was probably originally designed for an incandescent lamp, which would have little trouble with being used this way. But I digress.