I am trying to understand that if for STM32F405 MCU a custom bootloader is used on the MCU then each of the two projects for the custom bootloader and the application code will have their own 'startup.s" files.

What I understand is that both of the two binaries, ie the bootloader and the application code, they both reside at different locations in the flash.

Now when the custom bootloader will exit and return the control then the control should pass-on to the startup code of the application code. But I don't know how it actually happens. Does the two binary programs resides at contiguous locations so that after the bootloader finishes the next instruction is that of the startup code?

Or they are at different locations and somehow the start address of startup of application code is saved as jump address at the end of the bootloader binary?

Will it make a difference in the way it is actually implemented if I use Keil or GCC compiler?

The compiled image of an STM32 application begins with a vector table, in which the first word contains the initial stack pointer value, the next one has the address of the first instruction.

The bootloader must obviously know the address the application is loaded at (how could it load it otherwise?), so it can look at the first two words of the image it had just flashed. 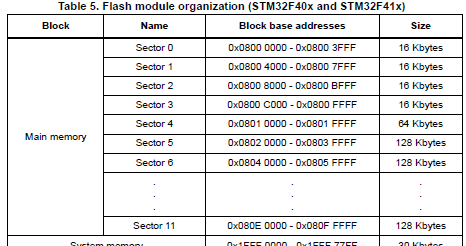 The designers of this MCU had arranged a few shorter sectors at the beginning of the flash exactly for this purpose. You might want to reserve 32k for the bootloader, and place the application at 0x08008000 for example, it's up to you (and the complexity of the bootloader).

Will it make a difference in the way it is actually implemented if I use Keil or GCC compiler?

The only difference would be in the linker configuration files, which tell the linker where to load the application. The GNU linker takes it from a linker script (*.ld), Keil calls it scatter file. They have the same purpose, but different syntax. You should adjust the linker script/scatter file of the bootloader too, limiting the amount of flash available to it.

Not the answer you're looking for? Browse other questions tagged stm32 bootloader keil gcc or ask your own question.