I would like to make a simple circuit to detect when an analog signal goes either above +10V or below -10V, and switch on a single LED if either of these cases occur. I have available only +12V and -12V power supply rails. The figure below shows what I want to achieve: 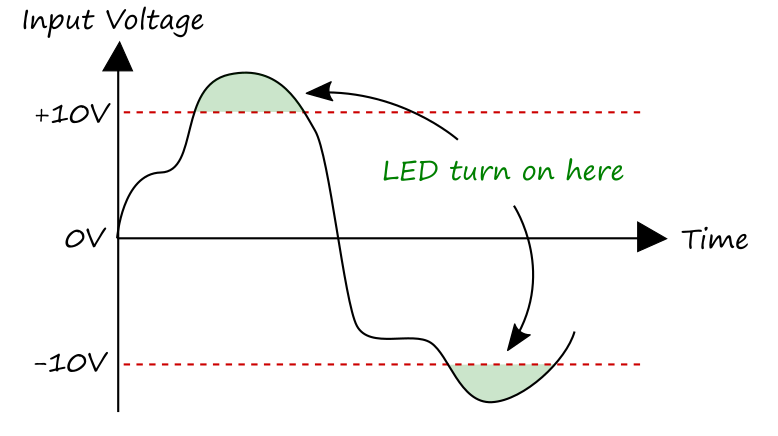 So far, I have discovered the so-called windowed comparator, and tried to implement it for the circuit. To do this, I used the LM393 dual comparator chip, powered by +12V and -12V, and then used two pairs of resistors to get the required +10V and -10V references derived from the existing PSU rails. I have also pulled the open-collector output up to the positive rail. So far so good. The schematic so far is shown below: 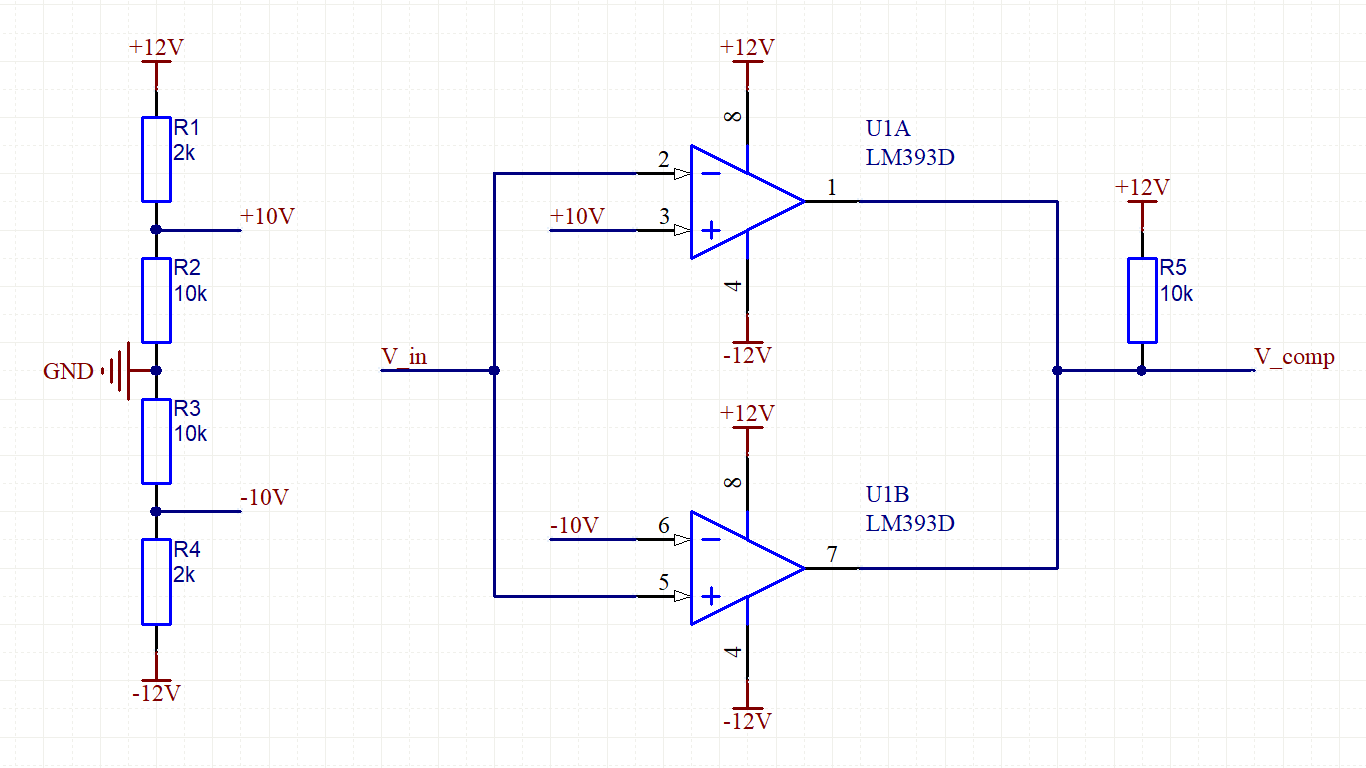 Now, this circuit does not quite do what I want - namely the voltage V_comp is -12V when I want an LED to be ON, and +12V when I would like it to be OFF, as shown below: 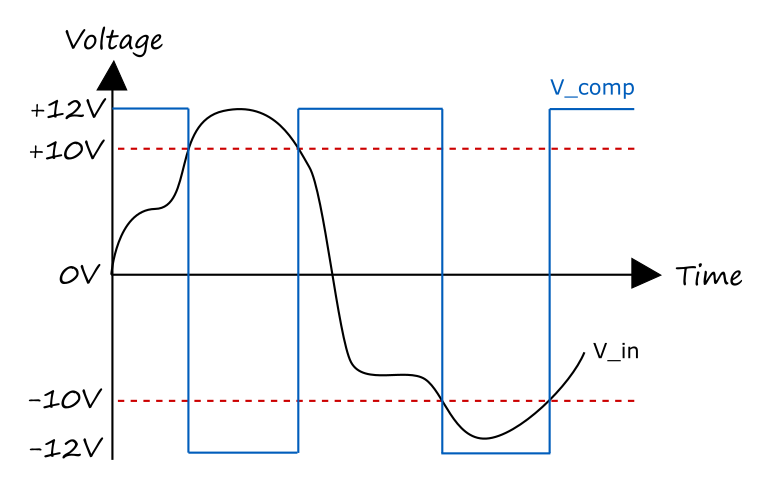 So, my question is: What is a simple way to take this and finish the last part of my goal? Would I need to use some inverter chip now? Or can it be done using some simple logic inversion / level shifting using MOSFETs? Also, if there is a nicer way to do it without the comparators, I would be interested to learn.

The LM393 comparator used is not really designed to drive LEDs. The current limiting circuit causes a voltage drop at the output so you should NOT try to pass any more than the minimum spec of 6mA.

The output current limiting is severe and may result in destruction of the device. 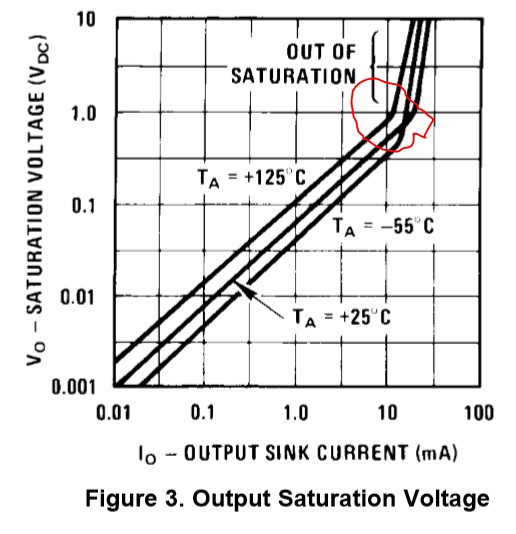 Read Note 7 in the datasheet and understand that at just 20mA the device dissipation could rise to beyond 2W ....clearly far beyond its rating. You can understand the rather primitive current limiting by examining the schematic diagram: 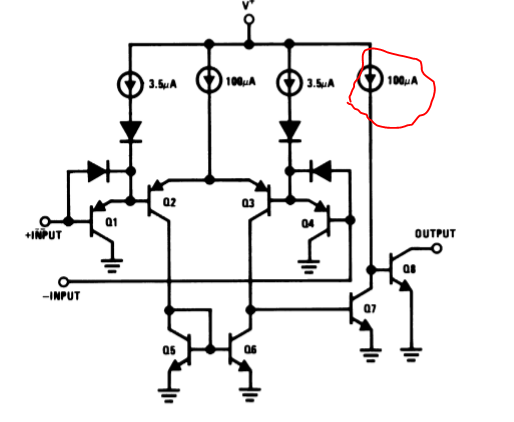 The output transistor is driven by a constant current source, so depending on hfe the device rapidly pulls out of saturation at some given point not related to the supply voltage. While the datasheet specifies the output can be shorted to ground continuously ....you'd expect that for an open collector output!!! What they say about a short to a positive supply is that you MAY DESTROY THE DEVICE. For this configuration with +/-12V supplies YOU CANNOT short the output to either ground or +12V.
So @Dave Tweeds comment about short circuit capability of the device is completely wrong.
In this particular application with +/-12V supplies I would suggest that a short to ground or a short to +12V would instantly destroy the device.

There are several ways you might alter your circuit to provide more LED current in a reliable fashion. Given that you have already chosen to use +/-12V, I'll suggest only modifications to that schema (it would not be my first choice): 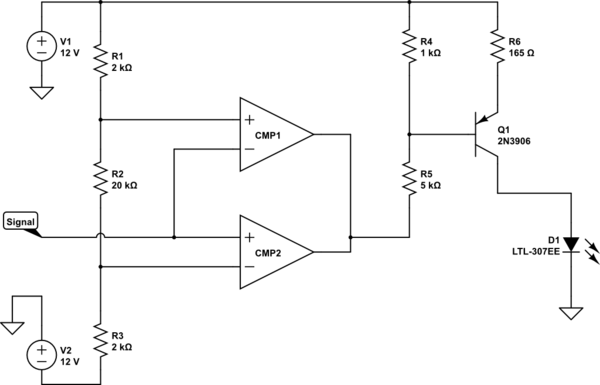 The LED is driven by a constant current source (Q1, 2N3906), so the output is short circuit to ground friendly. This is important if your LED is panel mounted and you have to run wires to it (You should never run your supply voltages in external wiring without current limits in place). In fact the collector output of Q1 could be shorted to +/-12V or ground without damage to the device.

How does this work?

You could reduce the current through R4,6 further if you want to. For example you could raise R4 to 2k and R5 to 10k. This would drop the comparator current to about 2 mA which is still enough to define the base voltage for Q1. The base current for Q1 is likely around 400 uA so any resistor selection has to take this into account.

You are of course limited in how high you can set the LED current. You are limited by the power dissipation in Q1. In the circuit shown with just a single LED load (Vf=2.2 V) you may see Q1 dissipating a maximum of about 130 mW. Well within rating, but it will get warm to the touch. With a Vf=3.2 V this power dissipation is about 110 mW. You could easily double the LED current to 40 mA and still be well within the rating of the 2N3906.

You can simply connect your LED in series with R5. That puts a little over 2 mA through it. If you want more light, reduce the value of R5 — 2200 Ω would give you about 10 mA.

Not the answer you're looking for? Browse other questions tagged mosfet analog comparator or ask your own question.

0
Comparators Dragging Each Other Down
1
Understanding electrical characteristics of comparators: input offset voltage and open collector output
4
Voltage divider not making any sense
4
Why add resistor on comparator input?
0
Safety considerations when using LED and a comparator
0
Having problems with a window comparator
0
What is the best way to design voltage monitor with tri-colour LED?
1
Using a compartator to make an LED light up. How do I make the LED light up?
0
LM393 comparator only connects to GND