To properly size the heatsink, I need to know how much power the triac is dissipating, and I realized that in the datasheet there is no such thing as an equivalent to what in a MOSFET would be "Rds on", and that I don't actually know how to find such a parameter.

The circuit is as follows, taken from this datasheet, without the snubber network:

Initially R1 was 680 ohm, because i thought that it could work anyway and less current would pass through the opto; but i subsequently dropped it to 360 ohm because i figured that more current through the gate would make for a wider channel between the main terminals: is this assumption correct? Does this current also contribute to the power dissipated on the triac?

Based on what i read, what i know, (electronics-tutorials.ws, link 1 and link 2, and the Wikipedia page about Triacs), and the following image, my guess is this:
for the most part, the power dissipated by the triac is given by the current to the load I, times the triac on-state voltage VT.
Is this correct? 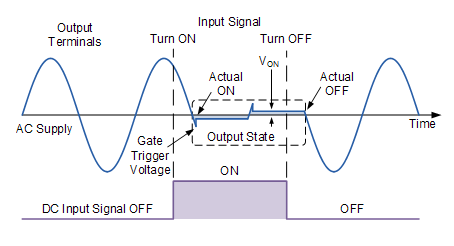 Please note that without a zero-cross detector, my microcontroller won't turn off the opto after the triac has been fired into conduction, so assume the opto is always on.

The resistor value does not noticeably affect the power dissipation. It only conducts briefly at the beginning of each cycle until the current is sufficient to trigger the gate. Using an excessively high value causes RFI from the switching too far from the zero crossing and can contribute to having some DC content in the output (important if the load has a transformer). The latter effect is due to asymmetrical triac trigger current in quadrant I vs. III.

Usually you can directly read the typical power dissipation from the triac datasheet. In your case, the datasheet you linked above contains the following graph:

Your conduction angle is 180Â° in this case. You should aim to keep the triac junction well below the absolute maximum value at maximum ambient temperature for decent reliability. Personally, I don't like to see the junction temperature much exceed about 100Â°C under any conditions. If it's losing gate control it's way, way above that (and any triacs exposed to that abuse should be replaced with new parts).

Not the answer you're looking for? Browse other questions tagged triac power-dissipation or ask your own question.