I'm building (on a breadboard) a 16Mhz oscillator (part of another circuit) with the HEF4060B using an external xtal. 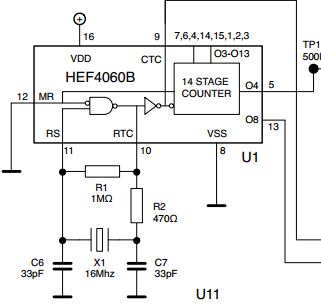 that's not so different from the example on the HEF4060B datasheet 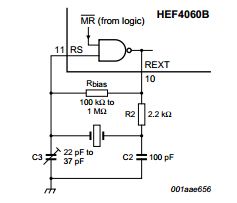 The first problem is with the 16Mhz xtal the thing doesn't even start to oscillate. But that's a secondary problem. If I replace 16MHz xtal with a 11MHz one (or less) the oscillator starts. I can see with the 'scope that I have a nice 11Mhz sinusoidal waveform on the pin 11, and I see a not-so-nice square-ish waveform on the pin 9 (so, I imagine that oscillator parts works fine). The MR pin (Master Reset) is connected to GND. So, everything should work as expected. Problem is that I have fixed values on the output pins! The 14 stage counter is receiving a signal from the oscillator stage (as I can see it on the pin 9) but doesn't count. Pins are almost always zero. And when some pin is at 1, if I raise MR, pin goes to 0. So, the logic and Master Reset is working, but the counter is not.

*Replaced Xtal (more than once)

*Replaced every passive component (more than once)

I'm really puzzled. It must be a problem so silly that's too evident for me to see!!

UPDATE: I've rebuilt the circuit with a different layout on a different breadboard, and now it works with 4MHz, 11MHz and 14.1MHz (from 9 to 15V). The 16Mhz one still have some problem, because it starts to oscillate only if I remove the capacitor between PIN11 and ground. I tried with some random values, from 1 to 1000pF, and nothing. But I think that this could be a problem caused by the breadboard as apalopohapa said. Moreover I don't have the datasheet for the specific xtal, so I don't know how to find right capacitor values. Maybe this should be another question...

The problem could be related to testing at near the device's maximum frequency on a breadboard. Breadboards add inductance to all the pins and force large loops in your wiring. They also make proper power bypassing difficult because you have to use caps with long leads. Test at lower frequencies and see what happens. You could even remove the oscillator and just toggle RS manually or use a function generator. Note from the datasheet that the lower end of the maximum frequency at 12V is about 12 MHz (the typical value is much higher, but you can't really count on it because it is not guaranteed), but this was probably rated with device properly bypassed on a pcb. Lastly, the parasitic capacitance that the breadboard adds will affect the oscillator circuit, so you may have to adjust for this.

Like I said in a comment before, you may need to start looking for the improbable, or things that you take for granted because they usually don't fail: the breadboard, cables, etc.

Be aware that breadboard connections can have a LOT of capacitance. The Wikipedia Page on them states 2-25 pF per contact point, so you may have far too much capacitance on your crystal.:

Due to large stray capacitance (from 2-25 pF per contact point), high inductance of some connections and a relatively high and not very reproducible contact resistance, solderless breadboards are limited to operation at relatively low frequencies, usually less than 10 MHz, depending on the nature of the circuit. The relative high contact resistance can already be a problem for DC and very low frequency circuits. Solderless breadboards are further limited by their voltage and current ratings.

Another link from an Illinois ECE college course states:

2) There is generally a 10pF capacitance between rows on a breadboard. This is negligible for most frequencies, but if you are operating in the RF spectrum this quickly becomes problematic. This is generally why high frequency devices avoid breadboards. You could try to separate components on the breadboard, but this increases lead inductance in the connecting wires which have to be longer. Use PCBs for anything in the RF domain.

Basically, the intrinsic capacitance of the breadboard may already be equivalent to the needed crystal load caps. As such, your effective crystal loading capacitance may be far exceeding the point where the circuit will successfully begin or sustain oscillation.

If you can, I would strongly suggest lifting the two crystal pins (bend the leads on the DIP package up, so they poke out of the device horizontally), and soldering the crystal and caps directly to them. This removes the breadboard from the connection entirely, and will likely be far more reliable. However, it would make changing the crystal somewhat more involved.

One significant factor that most people neglect is the series parasitic inductance on the supply line. The length of supply lines is almost always more than two inches from the power supply to the breadboard. That means a huge parasitic series inductance for 16MHz.

I suggest fitting a 10nF to 100nF ceramic capacitor next to the hole of pin 16 and pin 8 respectively. It'll give stiffness on 4060's supply lines and will give extra capacity to the 4060 to drive various parasitic capacitance on its outputs.

Not the answer you're looking for? Browse other questions tagged oscillator crystal cmos counter or ask your own question.