Ask Question
Asked 7 months ago
Active 7 months ago
Viewed 215 times
1
\$\begingroup\$
Closed. This question is off-topic. It is not currently accepting answers.

I have a Dedicated Micros UP07223010 power supply that gives out a chirping noise. A voltmeter attached to the terminals shows a swing for each chirp. A few days ago, my HP laptop power supply developed the same chirping problem and had to be replaced. So I assume it is quite common. Here is a picture of the interior. The three bigger capacitors near the center with gold marking (3300 uF, 16V) look to be a bit bloated. Could they be the problem? 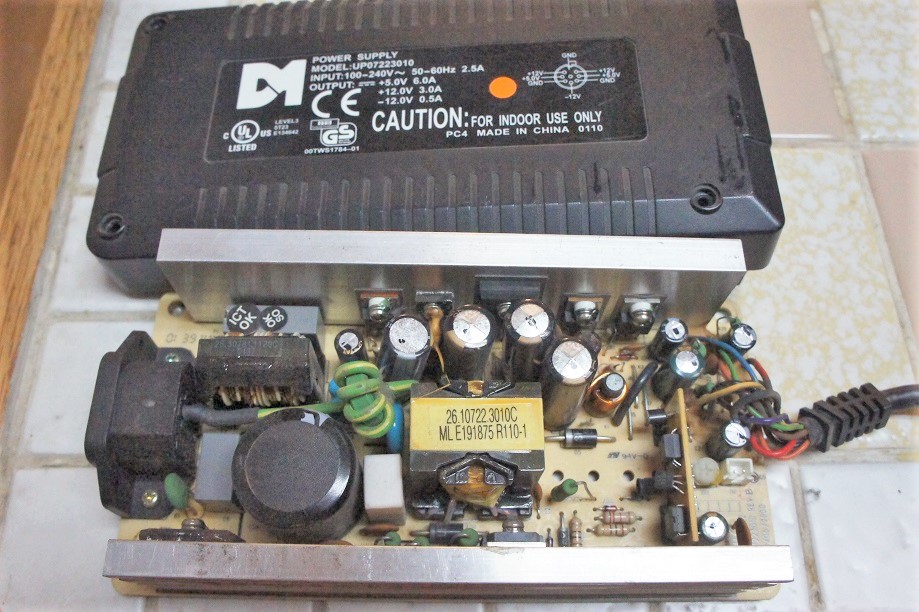 'Chirping' comes from the power supply restarting over and over again. The typical cause is an external overload, but defective internal parts can cause the same effect. The power supply is trying to run but is encountering an over current condition that prevents the output voltage from rising to a preset level by a preset timeout of one second or less.

You mentioned bloated capacitors. Generally it is a single part that fails, either a diode or capacitor in the output stage. However a component failure in the feedback loop can cause the same effect.

Note that over time constant restarts will burn out the control IC or MOSFET. Testing with a good DVM could help find out where the proper rise in output voltage is being cutoff. Be careful! The primary side (before the transformer) has about 240 to 340 vdc, very painful to touch.

It has been suggested and is recommended that all bloated capacitors be replaced with same value parts, rated for \$105^o C\$ and with a low esr value. Though the fail mode may not be a short, their value could drop to 1% of rated value, preventing a stable voltage from building up before the startup times out.

The 'chirp' sound is from an initial series of startup pulses in the transformer windings and core. On a good startup you would hear this just one time and it maybe too brief to hear.