How can output from a single logic gate/DIP switch supply input for multiple gates?

I have googled this quite profusely, and can't seem to find a straight answer. I am a consummate newb when it comes to electronics, so please forgive my ignorance.

I am wondering how it is possible to send approx. 5V* to more than one logic gate simultaneously from the single output (1-bit) of a previous gate and/or dip-switch, assuming one was to build the system physically on a breadboard.

I have just figured out in my head and on paper how to make a very basic adder work, with the help of this site.

The problem, if I'm remembering my high school science teacher correctly, is:

The only way to "double-up" a voltage to 10V (to supply 2 gates with 5V "1" each) would be to run the original 5V signal in parallel, rather than splicing/forking (which, I believe, would be in series, not parallel), which would halve it to ~2.5V (not sure on that, just my memory of how electronic systems were explained back then).

For the adder, you have to send the "A-bit #1" to two different gates from a single dip-switch. Can someone please explain (physically and in terms of voltage) how this is possible. This is not for homework, simply for my own edification/hobby. Thanks in advance for your answers.

If necessary, I can upload my diagrams (on paper).

Remember that voltage is like pressure in a pipe. If the flow from two different pipes is combined, there is more flow, not more pressure.

Same thing applies when connecting two 5V supplies or signals together, there is more current when paralleling.

If you want more voltage, you need a charge pump or DC to DC converter.

An Add gate compares the voltages, if both are high at 5V, it wouldn't be possible in the circuit world with switches to get 10V. So instead the additional information is carried as another signal line called the carry out line: 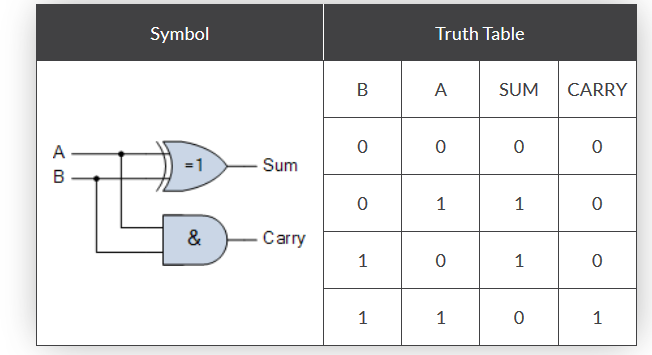 EDIT: tl; dr version: Here's someone who built this on proto board. Have a look: http://egomachines.com/animoid/ann-hardware/build-full-adder.html

First, gates don't literally 'add' voltages together (op-amps can, but that's another disussion.) Rather, they use voltages to represent numbers as binary digits, or bits.

So a 1-bit full adder implements the function a + b + c = sum, with a carry-out bit. In binary notation then,

You have three 0/5V inputs a, b and c that map to two 0/5V outputs, sum and carry that you will see below.

Back to gates now. Gates have four kinds of connections:

Normal logic diagrams don't show the power connections. In the real world, when you make a logic circuit using ICs, the first thing you need is to make sure they have their power connections (+5 and GND) tied.

Once you've done that, then connect your inputs, your outputs, and your outputs that connect to other inputs.

If you have a gate output feeding another gate input, it's perfectly fine to tie them output-to-input. And, importantly, a single gate output can drive multiple gate inputs just by tying them directly. This is called fanout and is supported by TTL (74xx) and CMOS (74Cxx, CD4xxx) type logic.

Below is a diagram showing a full-adder connected from individual gates: 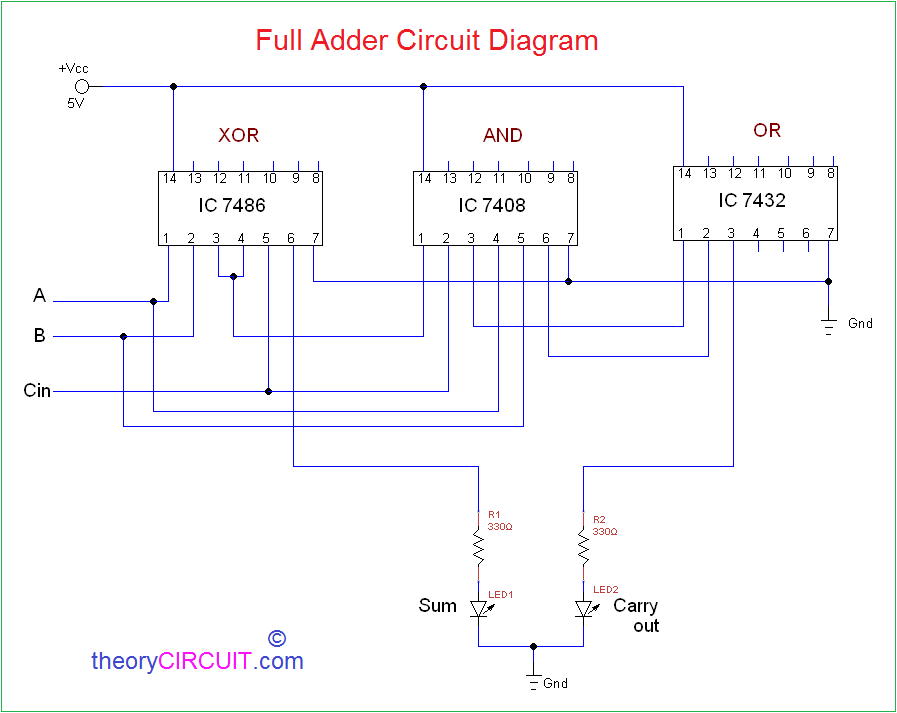 This shows the common power connections, and how the gate inputs and outputs tie together, including the driving-multiple-input fanout connections.

Conveniently, this circuit includes LEDs to show the state of sum and carry. That’s another thing that gates can do: provide current to drive stuff. Gates with high drive are called buffers and can drive a larger number of loads than normal gates. But here the normal drive is enough for an LED. 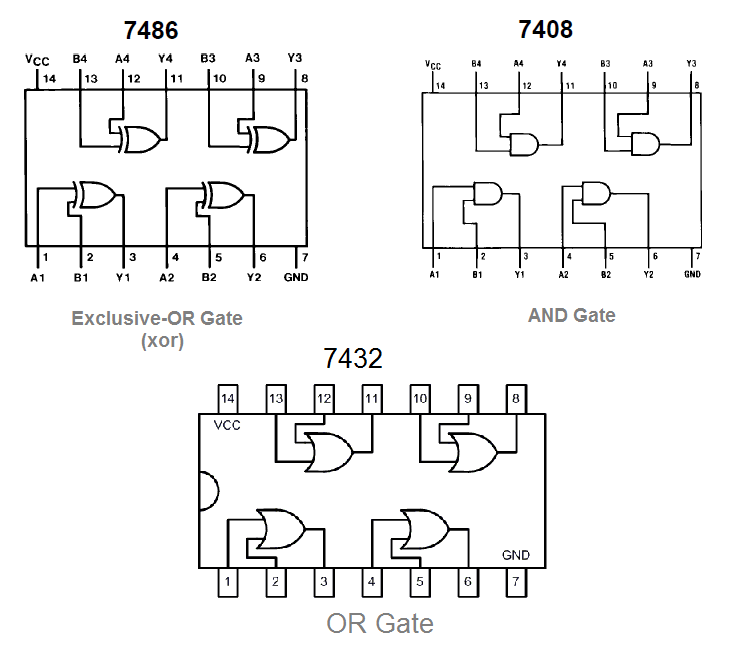 See if you can relate the connection to this diagram of a full adder from the link you posted:

From your link here: https://www.electronics-tutorials.ws/combination/comb_7.html

You are simply confused at the difference between logical 1/0 and input/output characteristics of the logic family ICs you are using.

You may find that this document helps you. You can also download some of the very old Logic Databooks such as this TI version from the Internet Archive.

Both these documents allow you to see the implementation of the logic gates, and here is one view of a 74LS00 2 input Nand gate: 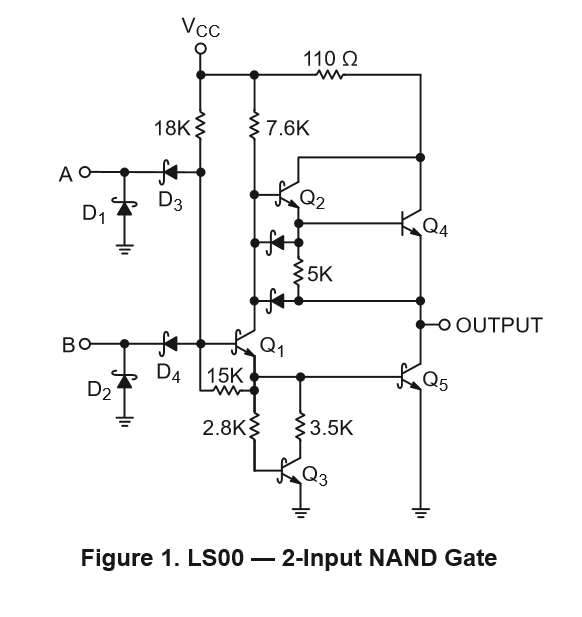 From the schematic you may notice:

From the datasheet you can glean the following information:

How can the output from a single logic gate/DIP switch supply input for multiple gates? 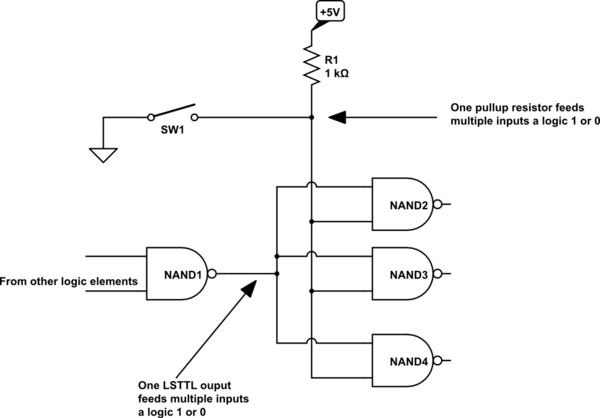 You separate you thinking into two branches:

You can now see that for example in diagram above one 74LS00 output 'drives 3 other inputs on three other 74LS00. Providing NAND1 can sink the current required from NAND2,3,4 all will be ok. In fact the normal design rule for most logic is to assume a fanout of no more than 10 ...ie one output can drive the logic level well within spec of 10 other inputs.
When designing logic using a toolset, you don't have to think about FANIN or FANOUT it's built into the tool and will warn you when you exceed the capability of the device.

So in summary, don't think about the voltage or current levels, think about logic levels. Many inputs may be connected to an output and while at a DC characteristic level these are all in parallel you normally don't have to consider this. In complex systems there are 'buses' that connect together 10's to 100's of inputs and outputs (many tri-state) where you only consider the logic levels during the early design. the DRC (Design Rule Check) for your toolset will warn if you break the rules.

6
When abstract logic circuits get translated to the electrical equivilant, how are conversions from 0 to 1 handled?
3
Realizing logic gates with transistors: AND and OR gate in parallel, trying to understand different behaviours
2
Can the two “high” input to a digital logic gate have different voltage values?
0
How can I convert multiple Karnaugh maps into a logic gate circuit?
2
How can we convert multi-input NOR gate diagram to a 2-input NOR gate diagram?
0
How can I have an ECL logic input for a CMOS logic gate
0
Can the output of one logic gate serve as input to more than one subsequent logic gates?