The modular 5V-powered design's module is having two output clocks (21 MHz and 3.5 MHz) to other modules in the system. I am looking for the best way for buffering these signals so that they would be enough fanout / strength and least distortion for several distant wires attached within the system. Length can be considerable, up to 60 cm (25 inches).

The choices are: use LVC1GU04 unbuffered inverter (the same type used in the Pierce oscillation circuit), use buffer like LVC1G126, or LVC1G14 Schmitt trigger.

During investigation I found out several pieces of information making me a little stuck with making the conclusions.

An unbuffered inverter itself may not have enough drive for a high-capacitive load. As a result, the output voltage swing may not be rail to rail. This also will slow down the edge rate of the output signal. To solve these problems, a buffer or inverter with a Schmitt-trigger input can be used at the output of the oscillator. 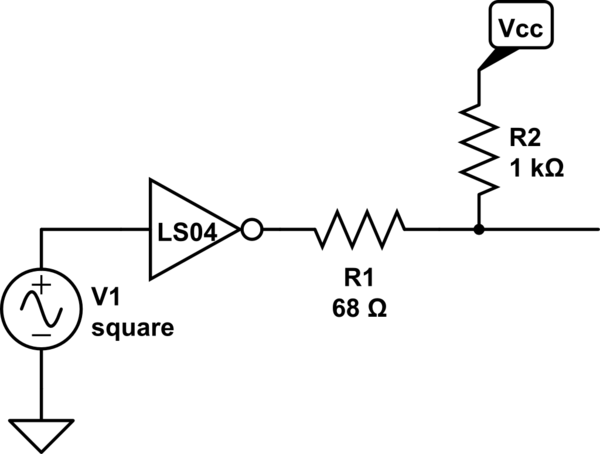 It uses standard DIP packaged 74LS04, series resistor to match impedance (and I guess limit output current), and pull up to ensure high level is maximally close to 5V as LS04 is TTL and is not rail-to-rail. Is there any better buffering circuit for the LVC1G(U)04 or other related small logic 1G chips in this family? What would be the frequency limit of the input clock?

I am looking for guidance. I can not change design and length of the traces in other modules, thus the effort is only about designing proper buffering/redriver circuit.

Browse other questions tagged clock buffer small-electronics fan-out or ask your own question.