How to do a simple overcurrent protection/circuit breaker circuit for 12V 1-2A?

We're developing an I/O shield for Arduino (sort of) and having four FET controlled output connectors with approximated 12V 1-2A load each. I need all these four outputs to be short-circuit protected and such incidents detected by another input pin on the Arduino.

Since we're using the Olimexino-STM32 Arduino clone, we've only got 3v3 on the CPU pins. Therefore we've attached an 12V driven LM339 between the CPU pin and the P-channel FET driving the 1-2A output. Pretty much like this, but with LM339 instead of transistor:

But since these four 1-2A outputs will drive four loads individually, we don't want the whole circuit to burn out in case of short-circuit. Ideally, short-circuit on one single output would not cause and disturbance on the other outputs, but report back to the CPU (using another input pin) it's lost, and the CPU could then alert higher-level system of the short-circuit.

The board is driven by a 12V source and the outputs will also need 12V so the solution will have to be have a low dropout voltage.

I've found some simple solutions using JFET with bound Gate and Source, but I'm not sure what's the actual current limit level, or even if it's applicable in our project since it's mostly used as constant-current driver for LEDs: 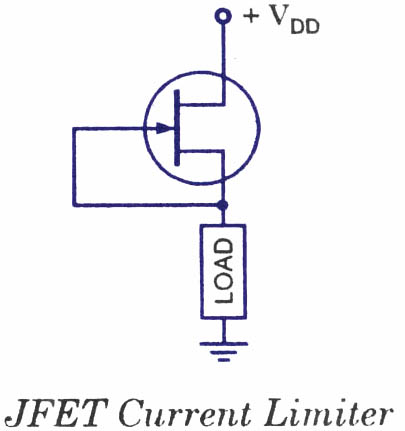 Thanks alot for all the anwers! We made some changes to our original design, but your suggestions is really helpful in other cases. This is how we've done:

To keep it both simple and cheap we've changed the overall supply voltage to 24v and implemented a first-stage high-effective switch regulator which brings the voltage to ~14.5V and then we've added a simple linear regulator (LM7812 derivate) for each output stabilising it to 12V and makes each one independent from the others. The linear regulator has short circuit and over current protection built-in.

The Current Sense lines will provide current / over-current info to analog inputs on your MCU.

If this specific part isn't working for your purposes, there are related parts, "similar but different", worth exploring perhaps.

These metal-oxide varistor PTC current-limiter solutions are often used in USB hubs and automotive applications such as windshield motors and are very low cost. One chooses the Holding current or trip current according to the design to protect from thermal overload as the devices will generally heat up to 85'C and trip faster than the devices you need to protect. Holding current devices on radial cap-like devices need free air convection to function. There are a few SMD sources, but naturally limited to special designs due to issues of thermal cycling a rigid PTC chip to a circuit board.

The parts range from 6mA ~ 30A holding current with trip currents from 12mA to 50A.

I suggest you buy an assortment of values and keep handy for your power sources to protect each bridge drivers from frying. Since they are cheap insurance, you can consider inserting several different values and use jumpers when you gain confidence that you can shunt a lower trip current PTC to rely on the next higher level PTC when you want to recover the small power wasted in the PTC for your design.

It's almost like having your own adjustable current limiter lab supply and running it near the trip point during development until you have identified the risks to over-current trips with dynamic loads and prevented those failures by design. It's not going to protect you from sparked short circuits that fry silicon tracks in a millisecond but they can work faster than "most" thermal overload failures and save you a bunch of Arduino bridge drivers until you get the bugs out caused by shoot-thru, long wires and no dead time control.

Once you choose the holding current rating, compare the Rs of the PTC with your motor ESR and your driver switch Ron to see where your power losses are distributed and effective losses/temperature rise under various conditions of static and dynamic loads. Bigger ratings tend to have longer trip times. But in small ratings such as 1A, one such part has a trip current of 2A with Rs min/max of 180~270 mOhm with a trip time of ~ 14s rated for 120Vmax, whereas the 1206 SMD part is 55~133 mOhm and trips in 0.3s but 6Vmax. Use the filter search to find the best parts. (in stock) 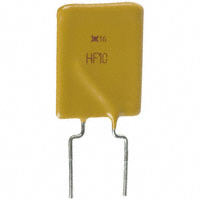 Not the answer you're looking for? Browse other questions tagged arduino protection short-circuit current-limiting jfet or ask your own question.