Presence of Crossover Distortion in Class A Amplifier

This question is about theory facts of class A audio amplifier.

It is known that class A amplifier is usually biased so that an amplifier's quiescent point is in the middle of the amplifying device's load line. For class B amplifier is known that it is biased in such manner that quiescent point is sitting at the lowest point of load line (in cut-off region). In terms of practical terms, class A will be crossover distortion free, while there will be at least some crossover distortion seen in output signal of class B amplifier.

However, author G. Randy Slone had mentioned in a book named "High power audio amplifier construction manual" under section of distortion mechanisms that crossover distortion cannot be completely eliminated from class A amplifier. 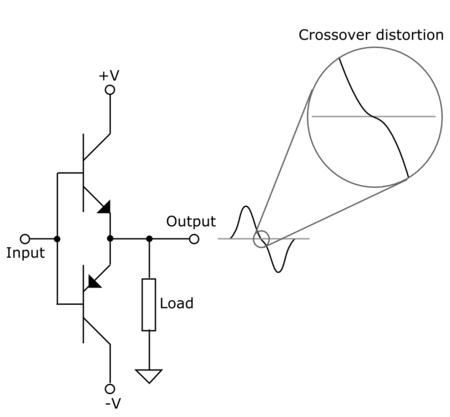 In the complementary pair you've drawn, altering the bias point alters the amount of gain variation you get in the open loop amplifier.

In 'class A' operation, the bias current is large, both devices stay conducting, so the open loop gain variation is very small, but not zero. The VBE has to vary to vary the emitter current, and this is non-linear.

In 'class B' operation, the bias current is small, so the open loop gain variation is large. The output devices turn on and off, causing large changes in gain.

In each case, once feedback is closed round the loop, the closed loop gain variation is suppressed by the loop gain.

In each case, the closed loop gain variation, therefore the distortion, is not zero.

In the case of class B amplifiers, it tends to be audible to many people, hence the preference for AB biassing, higher current than a pure class B, but still much lower power than class A.

In the case of class A amplifiers, it's generally inaudible to everybody, even those with golden ears. With enough loop gain, it may even be tough to measure. However, you can see that it will never be zero.