If I have a source voltage of 5 V going to a 10000 µF capacitor will the voltage/amps remain the same (obviously it will discharge) when I disconnect the source? 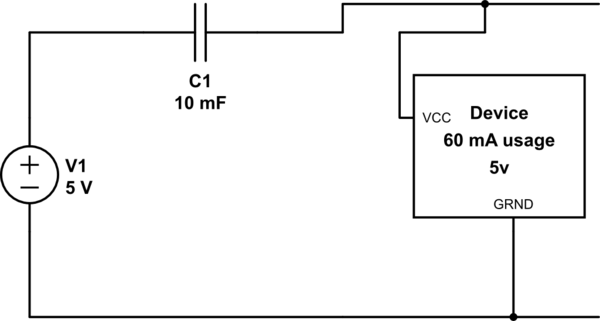 Will the capacitor dump all its voltage/amps at once? or will it only be drained what the electronic drain is meant to use(5 V 60 mA until capacitor is fully discharged)?

If I have a source voltage of 5v going to a 10000uF capacitor will the voltage/amps remain the same (obviously it will discharge) when I disconnect the source?

Capacitors have a leakage current (no material is a perfect insulator) which can be modeled as parallel resistance internally. Many times leakage current is listed in the datasheet. The capacitor will slowly drain according to the leakage.

Capacitors can be discharged with a resistor across the terminal, the problem is the current from the capacitor can heat the resistor beyond it's temperature rating. A resistor with the appropriate wattage rating must be used, or a larger resistor can be used. The time to discharge is the RC time constant, and the discharge follows an exponential curve.

For example to drain to ~60% of the charge, a 10Ohm resistor would take:

If you found the leakage to be say, 1nA, this would be similar to having a 5GΩ resistor.

If you want to find different values of discharge (like 1V which would be 20% of the initial value) this chart can be used. Look up the percent discharge, and then find out how many time constants needed. 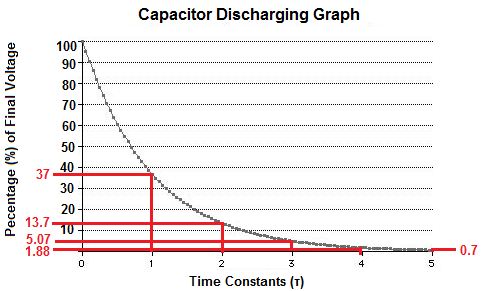 6
Discharge and charge rates of a capacitor - Comparing Energy Movements
2
Capacitor with op-amp
6
Automatic Capacitor Charge/Discharge Circuit
1
Capacitor voltage influence
3
active bleeder circuit for capacitor discharge
0
Possible to measure voltage while charging?
1
How to discharge a capacitor being charge by an op-amp?
1
Capacitor weird behavior
0
Why does a capacitor charge and discharge?
0
555 Timer - How to quickly discharge RC capacitor