I came across these broadcasting vans recently in London. 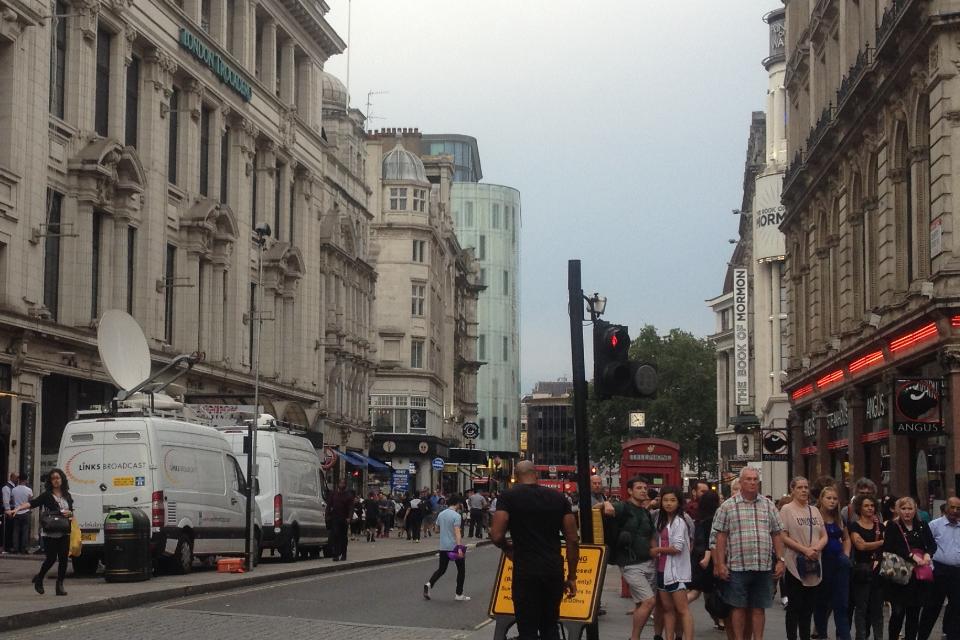 The antenna that's deployed I think is a Vislink Advent uplink antenna, similar to this model, designed to transmit to satellites for television broadcasting.

The antenna wasn't pointing directly at the building on the right, but close enough (the cylindrical beam from the antenna would have passed approximately 2-3 meters from the front edge of the building) to make me wonder about radiofrequency exposure to the building.

How much peripheral scatter occurs with these antennas?

Pretty much none. These are highly directive antennas; a good approximation[citation needed] for the opening angle of the beam is

Say that roof edge is 20m away, then with a bit of sine you end up with a beam widening of maybe 48cm.

Would transmitting in this configuration raise any RF exposure concerns (a) to the building,

nope, as calculated before,

(b) to the pavement to the right?

Even less so, since that's far from any direction of the beam.

Hypothetically, what would the RF exposure be from direct exposure to the beam?

Since none of these three are known, can't give you a number, but I doubt it'll be nearly as relevant as the phone in your pocket, unless you're hovering a couple meters away from the dish in the main beam.

Not the answer you're looking for? Browse other questions tagged rf antenna communication telecommunications satellite or ask your own question.

4
How to calculate the LNB output frequency from a satellite transponder?
4
Can I/Q signals from two perpendicular antennas be simplified to any less than 4 signals?
2
GPS Antenna Selector: How to electronically select one antenna from multiple available antennas?
0
Controlling a simple RC vehicle at long dinstace from a PC
7
How does a low power device make a direct uplink to iridium satellite?
1
can i connect two similar antennas to two ends of a cable to to re-transmit the signal received from one end?