Is it a good practice to use resistors for MCU inputs for this case?

I want to use Arduino Uno or a Nano which uses ATMEGA328P as micro-controller.

D2 is now set as INPUT. During the start up I want the MCU to detect whether pin D2 is HIGH or LOW depending on the setting set by the user. The setting will be done by an SPDT switch as shown below: 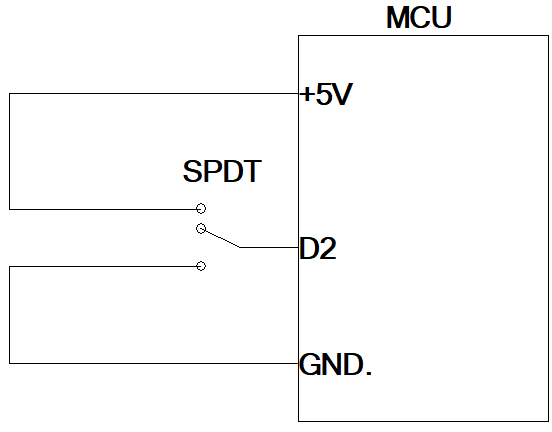 So if the switch pole is coupled to the +5V the state of D2 will be HIGH and if coupled to the GND the state will be LOW. Depending on this state in void main(), the program will perform a specific task.

(What if the worst case D2 is accidentally set as OUTPUT pin?)

Assuming the MCU pin will be damaged/destroyed if configured as Output, when externally forced to some fixed level, yes, you should insert 10Kohm resistor in the pin's PCB trace.

Do not configure the pin with any on-chip pullup or pulldown current.

As a quick-and-cheerful experiment there isn’t anything inherently wrong with this really, but it could be improved.

Out of reset the MCU will set the pin as an input. The worst that can happen is if you make a programming error and change the port function or direction such that it's an output. The resulting current is limited by the Rds(on) of the port pin driver so nothing bad will happen, no cratered IC, no white smoke. If you’re paranoid, add a series resistor.

It is questionable practice to have a floating signal. With no pull-up/pull down, the signal will float while the switch moves from one position to another. It’s vulnerable to noise pickup during that time, for example, from your finger as it touches the switch. So you should program the MCU to have a pull-up or pull down.

Hacktastical idea: Add a small capacitor on it (100pF, say) to the input also. Then you get a debounce action too as well as reducing the impedance of the input to improve noise immunity.

Finally, in a real product there is one other issue: ESD immunity. Switches are an entry point for static discharges. A TVS diode on the line next to the switch would be prudent. If the switch has a housing, ground that too.

Setting D2 as an output can cause that output to source/sink very large currents. This may cause the processor to behave incorrectly, or in extreme cases, to be permanently damaged. In general, you should avoid this possibility either in software or by adding a resistor in series with D2 (between the switch and D2).

Not the answer you're looking for? Browse other questions tagged microcontroller resistors output input or ask your own question.

5
Do I need to use a resistor with a microswitch to limit current for an Arduino Uno?
0
Interfacing switches with microcontroller
1
AVR switch best practice
4
How to enable Output pin to high by default in Arduino Uno?
1
Spartan 6 bidirectional pins how to use
1
AVR timer output when Data Direction Register set to input
0
What are the values of these resistors (R17 and R26) in this schematic? Or are they potentiometers?
0
Digital High with 3.3V and 1K resistor
4
Why do I need to make an intermediate step on switching a pin from input to output On Atmega328p microcontroller?