I've been trying to learn electronics stuff from this video series on YouTube: https://youtu.be/m4jzgqZu-4s

At 1:07 in the video above, a switch is closed, SO there is zero resistance across the switch BUT current flows in the switch despite it having no voltage across it. ie R = 0 but I <> 0. With the switch closed, both sides of the switch seem to be at the same voltage. That means that the potential difference between them is 0, so the current flowing seems to contradict ohm's law.

Sorry I couldn't phrase this question better, but what am I missing?

This is because the video is dealing with 'Ideals' to make it easier to visualise. In theory, a switch has no resistance, and when closed, it becomes a short circuit. If you were to connect a battery to a resistor, then measure from the positive terminal of the battery to where it connects to the resistor, there would be no voltage drop. If you measure across the resistor, you get a drop, and can measure the difference between the 2 points.

Essentially, the switch in the example is just seen as part of the wire with no resistance. The current is being drawn by the bulb, not the switch.

With this in mind, let’s come to your question. When the switch is opened, there is no way for the current to return back to the battery. So the light doesn't glow.

But once the switch is closed, there is a complete path for the current to return back to the battery. The current is flowing through the bulb because there is a potential difference between the ends of the bulb.

I have modeled the bulb to be a simple resistor (ignore the resistance). The -ve end of the battery is always at 0V potential. So the resistor has a potential difference of 1.5V across it, when the switch is closed.

To clarify what the switch actually does, consider the bulb is removed. So, there is no way for a charge carrier to return back. So just closing the switch doesn't allow the current flow. What actually happens is, the switch connects two of its ends, so both of its ends are at the same potential. The flow of current is determined by the condition I have mentioned above. How much current flows? Well, that depends on the total resistance offered by the whole circuit. For ideal cases, you can ignore the wire's resistance, battery's internal resistance. But for the practical case, they must be taken into account.

The “ideal” wire has 0 ohms resistance, so no delta V no matter how much current flows. We model this as all part of the same node. But since it’s an idealized model, it doesn’t account for all real-world effects. I think your confusion here maybe stems from that limitation of the model. A real wire might have something like 0.1 ohm to maybe 1 ohm. Another real-world effect omitted by that ideal model is that a battery has some internal source resistance — like the wire, it’s often small enough that we can omit that detail from the model. But if you’re trying to model how a circuit behaves differently with a fresh battery versus a nearly dead battery, you would need to account for the battery internal resistance. Another thing to watch out for is that ohm’s law doesn’t apply to everything, for example LEDs and other diodes are governed by a different physical effect.

A man named Georg Ohm noticed that every piece of metal have resistance R, which depends on material and dimensions. And that R can be used in formula I=U/R or as well U=IR very accurately. Practical electric cabling wires and switches have thousands of times lower resistance than practical light bulbs used with those wires and switches.

Consider the relationship between the variables of Ohms Law 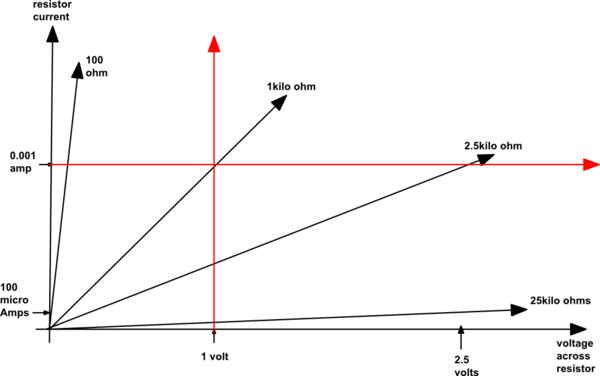 The answer lies in the fact that if there IS a current flowing, then it's value is controlled by elements outside your 0 ohm resistor.

Now, if resistor is zero, then VOLTAGE DROP ACROSS YOUR RESISTOR due to this current WILL be zero. There's no flaw.

On another note, in normal (i.e. non-superconductor) reality, 0 ohm doesn't exist. Even a switch.

160
How does the current know how much to flow, before having seen the resistor?