Is it intuitively correct to think of voltage as a “propellant” force?

Assuming this is in essence all accurate: say we have a simple series circuit with a 5V supply and 2 equal resistors.

The voltage drops throughout the circuit from 5 -> 0, but as we know current is the same across a series circuit

So intuitively, Speaking about series circuits only, is it valid to think of voltage as a “propellant” force or only as a force that “gets the electrons moving” initially and depending on the amount of force, sets the speed at which they “move.”

As an example of this, if we have a person who slingshots a rock in space (space so that the velocity of the rock is constant), voltage would be the force exerted on the rock initially that determines how fast the rock moves through space but after the rock left the slingshots pouch, that force would have no effect on the rock after that point.

Or is voltage more of a “driving force”?

An example of what I mean, if we have a person who’s pushing a boulder on a flat plane, voltage would be the force that’s exerted on the boulder. If the person stopped pushing, the boulder/electrons would stop moving/propagating.

I ask this because voltage drops across the circuit From 5v to 0v but current remains the same, so it seems as if voltage’s only responsibility is to start and set the speed of the current in the beginning of the circuit, but after that current acts independently of that voltage.

It is correct to think of voltage as a pressure and electrons as a fluid. Voltage sources are like pumps. Current is like flow. Resistors are like restrictions. That is the best physical analogy of a circuit.

Electromotive Force May be the term you seek

Driving force is more accurate, there's no real inertia to the elections so to keep them moving there always has to be something down the line that's pushing. Like you said there's the valence electrons shifting which drives the electrons at the end of the circuit to all keep moving onward. The more voltage potential, the bigger the obstacles the little electrons can overcome!!

Regarding the relationship between current and voltage, it sounds like you have a chicken-or-the-egg issue with your understanding. Current is a physical property where a circuit will have a defined number of electrons flowing through it per second (Amps = Coulombs/second). Based on the constant current flow through the circuit, each node between resistances will end up at a certain voltage.

For example, if you have two different batteries and attach them to an arbitrary circuit, the higher voltage battery will push harder and drive more electrons through the circuit. Using the current as a starting point, we can then calculate the voltage drop over each resistor and determine the node voltages.

Circuit analysis starts with looking at the circuit from the perspective of the voltage source, and then working out from there. In the circuit below the 12V source has no idea how many resistors there are and it doesn't care, all it sees is that it has to push eletrons through 12\$\Omega\$ of stuff to get the electrons to go through. Using Ohm's Law the current will be \$I=\frac{V}{R}\$ so I = 12/12 = 1A.

Since we know there will be 1A flowing through each resistor we can find that for each resistor a 1A current will cause a 4V drop across each one because of Ohm's Law: \$V=I*R\$ so V = 1*4 = 4V.

Intuitively this makes sense because each resistor is the same so the voltage will be evenly distributed through the circuit, using those same steps you can analyze any resistor circuit as long as you know how to calculate equivalent resistance for parallel and series combinations of resistors. 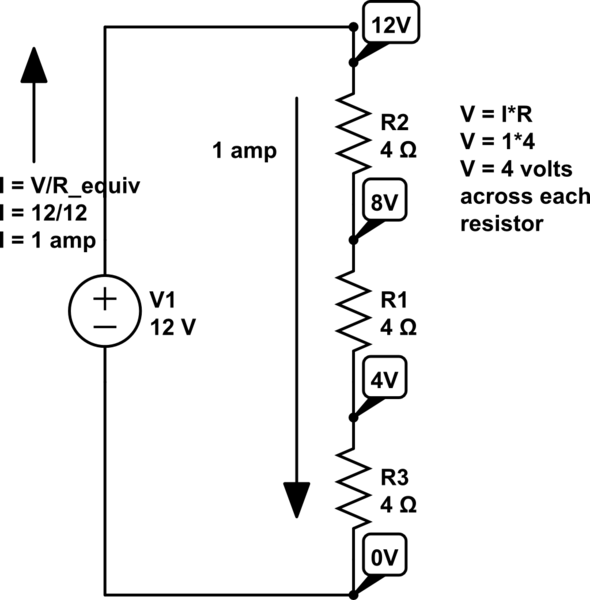 15
Why is there no net current in a wire without a voltage applied?
1
When current flows from a battery, does voltage decrease?
0
Circuit direction of flow according to tutorial
1
Is my understanding of current, voltage, and resistance correct?
0
How can an electron have 0 electric potential after exiting a resistor but have current?
1
Voltage transmission
3
Intuitively, why does voltage drop across a series circuit?
0
Why doesn’t voltage drop to 0 when a capacitor becomes fully charged?
0
Confused about Kirchoff's voltage law and voltage drops