I need to build a 2 stage inverting charge pump in order to convert a 12v rail into -24V which is then regulated to -12V using a 7912 LDO. it is used for a audio amplifier design and I need about 100mA of output current.

The oscillator is built from a CD40106B using a 100pF cap and a 50K resistor to get the highest frequency as recommended by datasheet. only one pin creates the actual oscillator and the other pins are inverted to create the two clock signals (one is the inversion of the other) and since there are 6 gates available, I have 3 complementary clock signals and decided to create 3 pumps (each with 2 stage) and put them in parallel in order to maximize the output current. also one of the stages is 180 degrees out of phase with the others in order to reduce ripple/switching noise.

I also initially did a prototype of the circuit on the breadboard and it seemed to work perfectly fine and even with a 10k load resistor, it held about -23V.

Then I put everything on a veroboard and soldered it up but it doesn't work. Even the oscillator outputs seem to be weird, before I connect them to the transistor bases, the output voltage on DC setting of multimeter is 5.6 or there abouts for the original signal and 6.something volts for the inverted signal which is expected, but after connecting that to the transistor base, it's only about 1 or 1.4v! after disconnecting the base again, the output stays at about 1.4 so I'm assuming I destroyed the CD40106B as well? I didn't use base resistors so I'm assuming that's the issue? but the transistors are rated for about 100mA base current and the CD40106B isn't supposed to supply more than a few mAs?

here is the full schematic, please help me fix this and get this charge pump to work(please ignore the 100mA current load on the output capacitor). 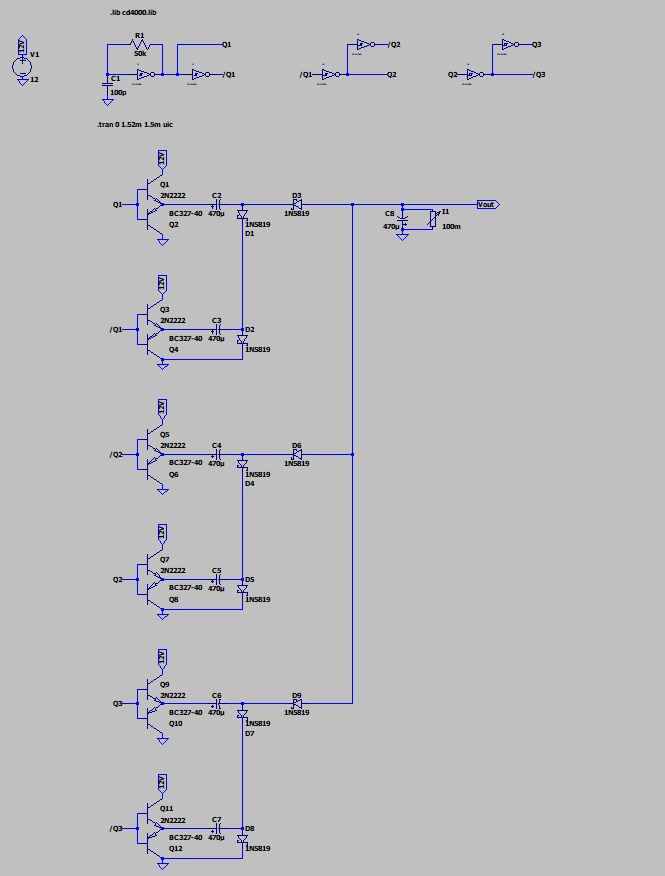 and here is a simulation of the oscillating waveform created by the CD40106B:

Browse other questions tagged transistors dc-dc-converter charge-pump or ask your own question.