Suppose one has access to common components and gear only : basic milivolt multimeter, badly regulated supply, linear regulators, 1% resistors, common BJT/FET, voltage references like LM431 or zener diodes, and not-too-bad op-amps with external null offset trimming like LM725, LM301, or even the old 741.

Is it possible to build a reasonably simple general-purpose pre-amplifier, in order to measure µ-volt — or tens of µ-volt — DC or near-DC signals, with such components ? What precision can be reasonably attained ?

Is a simple non-inverting configuration in two stages (e.g. 50x + 50x) good enough, or does one should use a more (or less) sophisticated design ? Can/should discrete components be used for the input stage ?

What precautions should be taken in practice, in addition to proper shielding ?

Are there references on the subject ?

The ancient LM725A was actually a pretty decent DC amplifier for relatively low (say < 100\$\Omega\$) source resistance (such as thermocouples), null it with a good cermet pot and you'll get < 1uV/°C maximum drift with temperature. If you can put the amplifier in a typical well-controlled office or lab environment, away from air currents and heat-dissipating components, chances are your drift will be limited by other factors such as thermal EMF and EMI, somewhere in the few-uV range.

Of course you can get a "zero drift" op-amp these days for a very small sum of your favorite fiat currency, with drift in the +/-50nV/°C range, so that would be preferable in many cases, especially if the supply is to be relatively low voltage. The "zero drift" amplifiers have a bit of weirdness in that much larger transient periodic currents come out of the inputs compared to even a typical bipolar op-amp but the average is much less than that of a bipolar amplifier such as the LM725A. Sometimes that matters greatly, often it doesn't.

There is plenty of information out there on the circuit scheme that @analogsystemsrf mentions- chopping followed by AC-coupled amplification, followed by synchronous demodulation. It's been used since the early days of electronics, using vacuum tubes, and probably before that. For example the IR detection system that R.V. Jones developed ca. 1938 (top secret at the time, as it was intended to help shoot down German aircraft) which used mechanical chopping. You can find many references in the literature, and if you restrict your search to dates prior to about 1980 there won't be any modern parts involved. Also look at "lock-in amplifiers".

There is a method that probably dates back to about the 1940s- using a 400Hz AC powered mechanical chopper, which can then be used to drive a center-tapped step-up transformer primary and/or AC amplifier. Here is a photo of a mechanical chopper from an eBay listing: 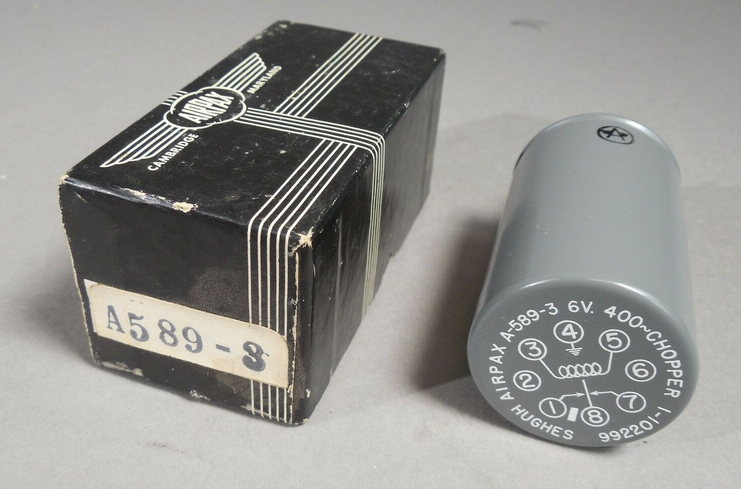 If you also have analog MOSFET multiplexors, then you simply chop the signal, amplify 1,000X and then use another analog MUX, synchronized with the first, to demodulate.

PhilBrick Nexus did this with balanced-varactor-diode-bridges for the input chopping.

Today, you use analog MOSFET muxes.

I tried a simple LM725-based non-inverting 100x amplifier with precision resistors and offset-null trimmer, powered with a clean 2x15V supply, and reading out the result with a basic 3-1/2 digit multimeter on the 100mV range. It was not shielded but very close to the measured device.

It proved to be stable enough (in my non-controlled environment) to measure voltages with µV-precision for tens of seconds, which was quite enough for me. But this is really the limit of what can be done with such a simple setup.

Not the answer you're looking for? Browse other questions tagged operational-amplifier amplifier instrumentation reference-materials or ask your own question.