Problem with NAND gate in proteus

I was doing a simple logic circuit in proteus when i realised that something was going wrong.

It looks like the NAND gate provides high voltage to its inputs from nowhere. No errors provided, but if i let the simulation running for a while, it always end with an unexpected close.

You can see that in the picture that i'm getting 4 volts from the inputs of a non-connected nand gate, and you can also see that if you connect the terminal to the ground(the ones on the top of the image), it seems to work as expected. 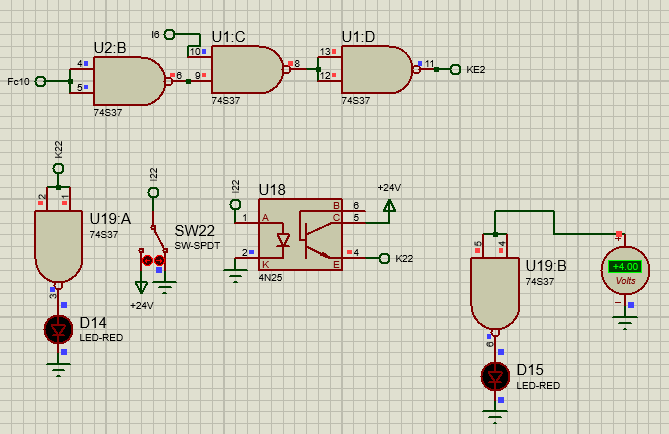 The 74S37 is a TTL logic IC. If you leave the inputs floating, then they will usually be seen as a logic 1, or the input will 'float' in the unknown region, where it could be a 1 or a 0.

Proteus will use the red or blue logic indicators to show whether something is at a logic '1' (red) or logic '0' (blue). If you were to remove the multimeter, you will notice that the input logic indicators will go grey. This means they are undefined, although most TTL will tend to go high.

For a NAND gate, use pull-up resistors on the inputs to tie them high, then you can drive the input low with your control signal. More on using resistors on logic gates can be found HERE.

This is what I mean with proteus. You can see by leaving the input floating, they will go to an undefined state, which Proteus will mark as a grey logic indicator: 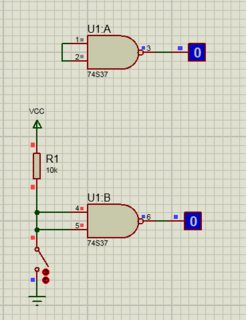 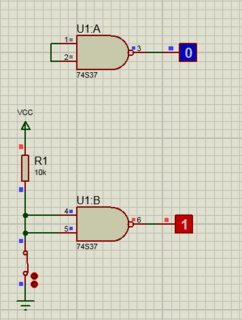 The voltmeter in Proteus has a modelled 10M(?) resistance which will allow the program to then register it as a logic 1, and the logic indicator will go red.

Not the answer you're looking for? Browse other questions tagged proteus nand or ask your own question.

1
Why am I getting this error when placing a capacitor in Proteus?
0
Different voltage characteristics of CMOS NAND gate for different connections
0
Is my jk flip flop missing two NAND gates to be complete?
0
NAND gate with one pMOS and one nMOS
0
Low voltage form a NAND logic gate then the state is high
1
CD4011BE (DUAL INPUT NAND GATE) not working
2
Multiple Switch Equation to NAND Only equation
1
Problem with ground between two batteries and a battery level notificator
0
Unexpected output of op-amp in Proteus