I'm working on my home project of building the 8-bit computer and now I'm on the RAM building stage. I'm going to use this chip for as my RAM UTRON UT62256C (datasheet). This chip is to be connected to the common bus, to which 8-bit registers are connected through 3-state buffers. My question is about write cycle timings (see the diagram below) 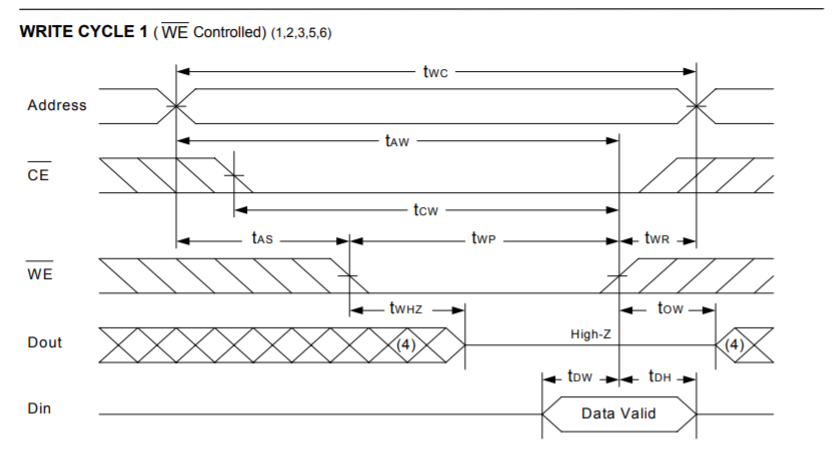 The doc says that after !WE goes down there is a period of time twhz when signals on I/O pins must be not applied: "4.During this period, I/O pins are in the output state, and input signals must not be applied. "

Question #1: Does that mean that I CAN NOT set-up the data upfront and then just put the !WE low for some period of time? If I do so, will it damage the chip?

Having said that !CE is to be always LOW, I assumed that my write cycle could look like this:

As it's an educational project I wanted write cycle to be like this because it simplifies design for manual mode of putting data to the SRAM. I was going to use dip switchers to set up the data and the address and one button to move !WE from High to Low maybe with 555 timer to set-up the pulse length.

Question #2: If I must not put the data on I/O pins before twhz, I was thinking about could you please advice some circuit that will allow to do manual programming with dip switchers

I was thinking about adding 3-state buffer between I/O pins and the dip switchers and some circuit that generates two pulses with the right timings triggered by pushing the button: 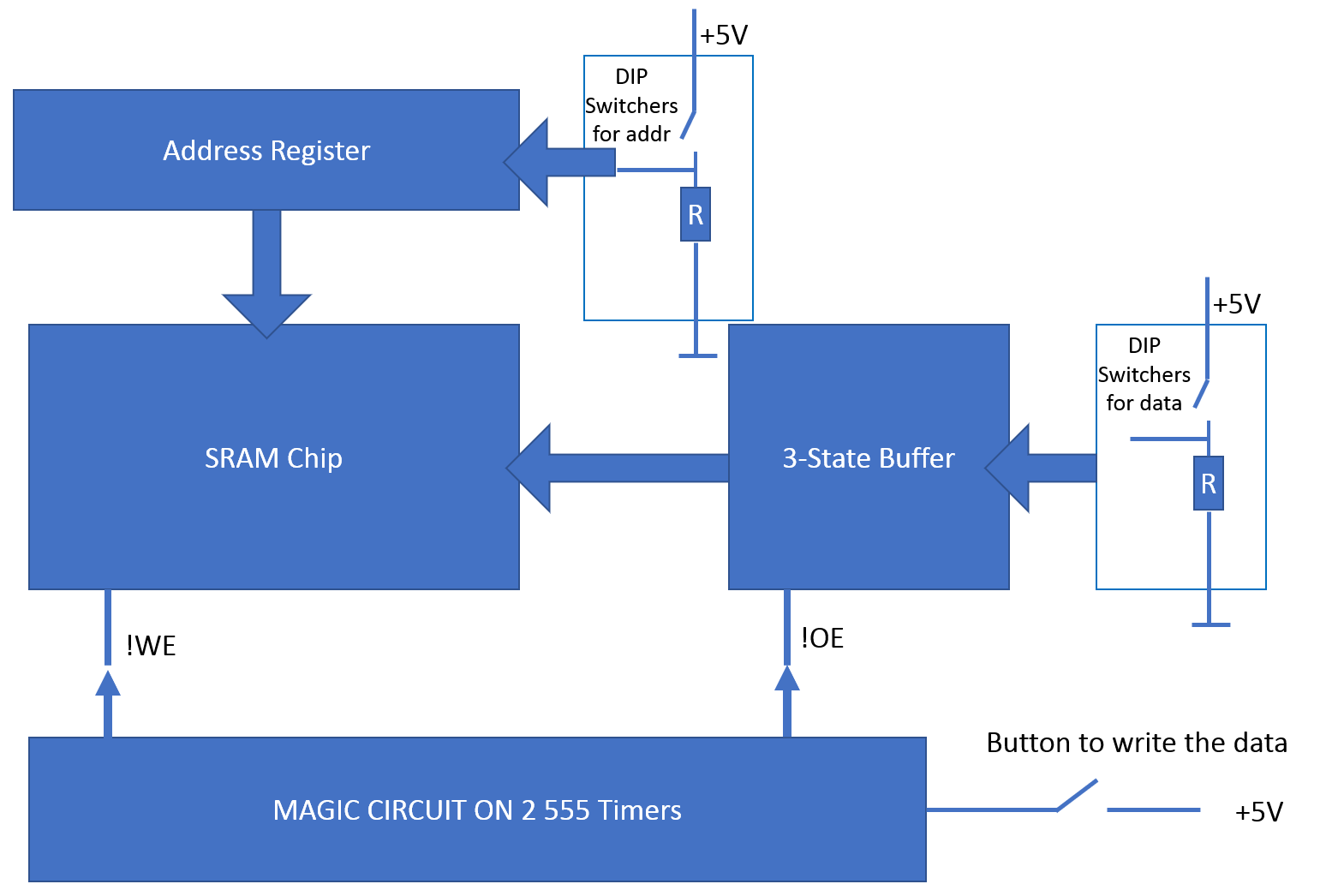 Thanks for you replies in advance.

The doc says that after !WE goes down there is a period of time twhz when signals on I/O pins must be not applied: "4.During this period, I/O pins are in the output state, and input signals must not be applied. "

This is a poorly written data sheet. While the concern mentioned can exist, the previous note #3 does a poor job of expressing the reality that the problem only exists if the /OE is held low throughout a write, which would not be a common or generally wise practice.

Typically, in a processor bus of this era, the chip select /CS would be driven active low by an address decoder subject to contamination and glitching during the change of the address lines from one value to another. As a result, a /CS timed write is not generally used. Nor is it a good idea to have a memory chip driving the data bus surrounding a write cycle, so /OE would not be tied low and the quoted concern would not exist.

Instead, the typical approach is to have the bus master drive the /OE line only if it wished to perform a read operation, and to drive a properly timed strobing of the /WR line at the proper time in a write cycle.

By using /OE to control the output buffers, and using /WR to the time the writes, you should be able to avoid conflict and be able to safely drive the data lines during all periods of time except those surrounding assertion of the active low /OE signal. Of course, to read from the memory, you will need a way to disable whatever you use to drive the data lines during a write, and to make sure that those drivers are disabled for a safe window around the assertion of /OE.

You are always able to drive the address lines, but their values only matter at the times required before/during/after a write or read cycle.

A simple way to construct a deterministic memory interface may be to create a finite state machine and include the clock low period as a factor in the generation of /OE, its complement to the write data drivers, and /WR. Keep in mind that a processor itself tends to be a sort of state (or else microprogrammed) machine - with instructions needing multiple clocks (or at least clock phases) to complete. You really only get to one instruction per clock with heavy pipelining and when operating from distinct internal code and data caches.

The other kind of write cycle ("Write Cycle 2", controlled by CS-) might be a better fit for your overall system design.

With the chip deselected (CS- high), you apply the address, data and WE- low all at the same time. Then you pulse CS- low and then high again while holding those other signals steady.

To put it simple: The typical setup is

Not the answer you're looking for? Browse other questions tagged sram or ask your own question.

11
Does pin order matter at all for this RAM?
2
Use of READY line on 8086 - is it mandatory?
1
M48Z02 SRAM unexpected data loss
0
What is the exact order of execution to access SRAM using a multplexers?
1
simplify external I/O memory access with small micro
0
SRAM output flickering
0
AS6C62256A SRAM Usage
0
use sram as logic analyzer?
2
Interfacing 16-bit SRAM/MRAM with Arduino Mega
1
SRAM Chip. Entering the data either manually through DIP Swithces or from the bus