I'm trying to transmit data(bytes) from a speaker (out) to microphone (in) via an FM modulated link. Now I have the problem that both will be used simultaneously (full duplex) and next to each other (so I have one transceiver) so the microphone (in) will catch sound generated by the speaker. Now I want to cancel out the received audio so that it is not transmitted back to the sender.

For clarification: The data modulation will be FM (Frequency modulation) and I'm a total noob in this case. The 'Data' will be sent in Bytes not voice recording. I use audio waves because those travel underwater way better than radio waves.

I hope I described my problem enough else here is another clarification:

A module is made up by one speaker and one microphone. Two or more of such modules will communicate with each other via audio waves (underwater). Problem: The microphone will catch audio waves that are sent by the speaker of the same module. I need to cancel out those. 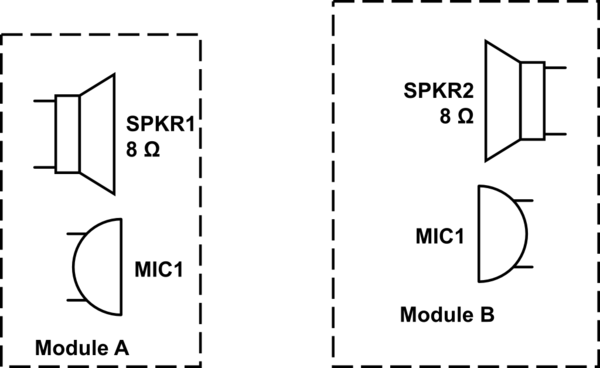 As I tried to explain Mic1 will record SPKR1 I don't want this and need to filter out what SPKR1 sent.

PS: sorry for my bad English.

You may have some success using something based on an old "telephone hybrid" circuit. 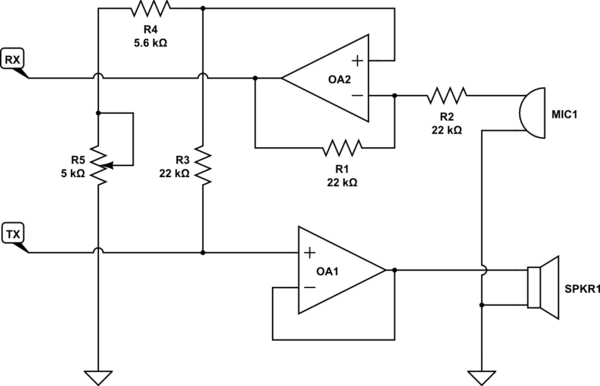 The idea being that you adjust R5 such that the signal received by the Mic is cancelled out.
I"m not sure how well this would work at higher frequencies though due to the delay introduced by the separation of the Mic and Speaker

Not the answer you're looking for? Browse other questions tagged audio communication digital-communications or ask your own question.