Sorry for this more longish question: I'm currently collecting some ideas for my next project where I want to connect an external balanced audio line level signal to an ADC with differential inputs (like a PCM1804, not specifically though). I'd also like to have a volume pot to boost the signal if necessary.

I've looked accross the internet and found this circuit (an amplifier for a balanced line):

Now this has two problems: First, it has fixed gain (I'd like to adjust that with a pot). If I understood correctly I'd have to change 4 resistors with one pot at the same time (I know of stereo pots but not quad pots) and as mentioned on the website the resistors would have to be close tolerance (which I'd guess is pretty difficult on something like stereo pots). Second, it doesn't output a DC offset which is required by the ADC.

From what I've found out the DC offset can be worked around by using an off the shelve solution like the OPA1632 which allows me to supply the DC offset voltage. This however also has two problems: First, I still don't have a volume pot in the circuit. Second the OPA1632 is relatively expensive at around $5 (am I too picky?).

One solution I could image is to convert my balanced input signal to an unbalanced signal, do the amplification with a pot, and then convert it back to balanced and then bias both outputs to my ADC's virtual ground. For the last step I'm not even sure if that's as trivial as connecting a capacitor in series of both lines and connect their outputs over a resistor to the bias voltage.

As for an attempt like above: Is converting a balanced signal to unbalanced back to balanced a silly thing? At that point I wouldn't even know why my ADC has balanced inputs in the first place. Is it common to have balanced inputs in audio gear but the actual "processing" is done with single ended circuits? I know balanced connections are useful for suppressing noise pickup on long wires (which I guess isn't such a big problem on a PCB).

I could also avoid doing the analog amplification altogether and do the amplification in the digital domain. However, if I we're about to set the gain to something like +40dB I'd obviously also boost my ADCs noise floor by that amount. Does it even make sense to avoid doing this digital amplification? Am I just going to amplify "analog" noise instead (I don't have that much experience with those kind of things)?

Does anyone have any idea which way I should go here? I can certainly understand good quality can cost money but if I can get 10x NE5332's or 10x TL072's for a single OPA1632 I'd like to avoid going for the more expensive part.

Does anyone have any idea which way I should go here? 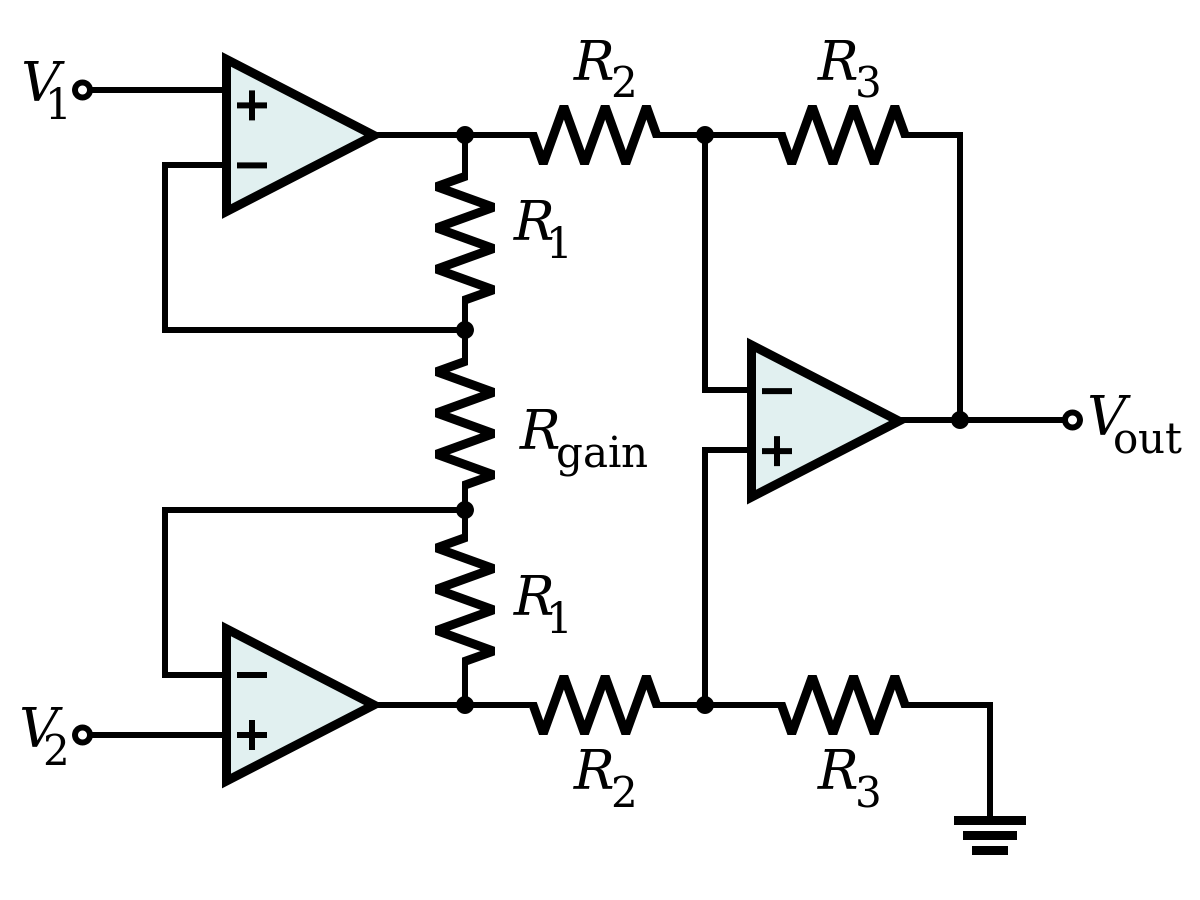 Gain is set by one resistor (\$R_{gain}\$) and, if you throw away the final stage op-amp circuit and take your differential output directly from the two op-amps to the left you should get what you want. You do need to spend a little money making both R1's matched but maybe 0.1% devices at 50 cents isn't a biggy.

Differential leakage capacitances either side of \$R_{gain}\$ should ideally be zero for a perfect match but if you are only dealing with audio it won't be much of a problem.

0
Is it possible to use a potentiometer as a DP3T style control?
0
PCM4202 Input buffer
1
What audible difference will an audio op amp make in an audio ADC
1
Boosting a microphone for a noisy, low sensitivity input?
0
How does noise affect an unbalanced signal on a balanced cable?
1
How to split audio signal into 3 separate channels?
1
Stereo channel strip based on NE5532
0
Balanced Audio Line Driver Off Single Supply
0
How to add a balanced input stage in front of a ADC?
3
Safely connect audio line level input to ADC