What is causing the oscillation in the feedback loop of an SMPS?

I am trying to make a switching constant current regulator for a Ni-MH charger. It accepts a current set input from the microcontroller using a PWM DAC. I basically want to source 2000mA and 200mA for 1C and 0.1C relatively for charging the 2700mAh battery.

The way that I've tried to accomplish this is as follows:

An OP-AMP which is configured in negative feedback, takes Vset (PWM DAC) as non-inverting input and Vsense (the voltage on sense resistor) as inverting input. It drives a small signal MOSFET with its output so that buck converter's voltage output is for desired current at the load.

However, I am getting oscillations on TP1, which affects the whole system. 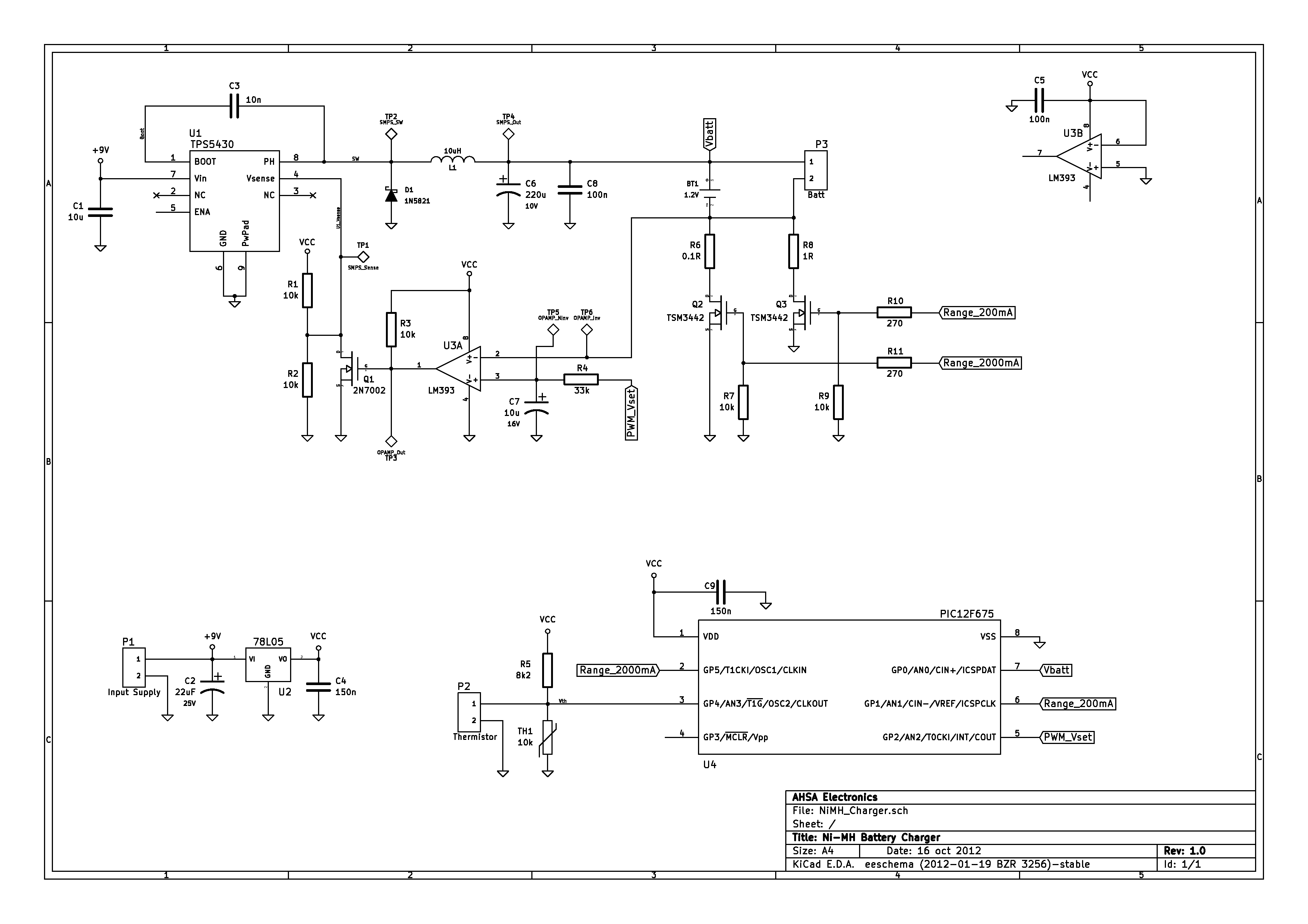 Here are some scope-shots of various test points which I have used very short ground lead on the probe to capture.

Fundamentally, you have way too much gain in your feedback loop, along with enough phase shift to create a very nice ~50 kHz oscillator.

First, I would simplify the circuit by eliminating the MOSFET Q1; instead I would consider swapping the inputs of the LM393 and using its open-collector output to drive the Vref node directly. Secondly, I would add a significant amount of negative feedback around the LM393, along with a capacitor to roll off the frequency response. You really do not need a lot of bandwidth in your control loop for a battery charger — a battery is not a highly dynamic load.

I understand about limiting the voltage swing on Vsense; that's what R1 and R2 are for. I'm saying eliminate Q1 and R3 and connect the LM393 to the junction of R1 and R2. Then, you need to swap the inputs to the LM393 in order to preserve the correct polarity of the feedback.

For negative feedback, just connect a capacitor between pins 1 and 2 of the LM393. Since pin 2 is now connected to your reference source, you'll also need a resistor between C7 and pin 2. Together, these components will roll off the frequency response of the comparator. I would start with values like 10K and 100 nF, giving a corner frequency of about 160 Hz. I don't know if this will be enough to make the system stable, but at least it gets you started in the right direction.

Let's take a step back for a moment. If we ignore PWM_Vset for the moment, what's really needed is to take the 200 mV that appears across the sense resistor and translate this to the 1.221 V that the regulator expects on its Vsense pin. This requires a simple noninverting amplifier with a gain of a little more than 6.

Based on the new circuit, it would be an interesting experiment to short out C7 and reduce R3 to 51K (gain = 6.1) and see if the regulator is now stable. If it is, we can then think about ways to make the setpoint adjustable.

Your control scheme is puzzling me.

U3A is an LM393. A comparator. The output is either high-impedance or ground.

The TPS5430 is meant to take an analog voltage at pin 4 and use an internal reference of 1.221V and an internal error amplifier to generate PWM. You have Vsense tied to 2.5V, so when Q1 is off the duty cycle will go to zero (sense > reference), and when it's on it will go to maximum (sense < reference) at some slew rate controlled by the internal compensation.

You're essentially driving an analog pin with a digital signal - this is a hard way to go about things.

You also have zero hysteresis on the comparator, so the output may chatter if the inputs are close to each other.

Your idea about using the DAC to make a reference voltage, to control the output voltage (and the current) is valid and correct. What you really need is a buck controller that gives you access to the internal error amplifier output, so that you can replace your comparator circuit with an actual error amplifier (bypassing the internal one) and have closed-loop control with whatever compensation you need.

(You set up the buck controller so that the internal error amplifier is always high, then tie your external amplifier to it so that it can pull down the signal and control the duty cycle.)

EDIT: Your revised solution will work. Replacing the comparator with an op-amp error amplifer to set the external operating point is a good compromise. You're essentially feeding a loop (the internal compensation of the buck) with the output of another loop (your external error amplifier) but that's the price you pay using one of those tiny-buck control chips with integrated feedback. I would experiment with load steps to see if the output has any oscillatory tendencies, just to make sure that there's no chance of instability.

Solution to this problem I had, is a combination of both of the answers by Dave Tweed and Madmanguruman. Thank you guys.

I also added some negative feedback with a capacitor, so that output will ramp up slowly enough, letting TPS5430 control the buck regulation. Oh, and let's not forget that I have swapped the input pins.

Test results are great. I have tried stepping the load, no problems. I have also shorted the output or applied very little (less than half an ohm) resistance and again, no problem.

For a 5 ohms load at 1A, efficiency is about 91%. For a 2A current at the same load, efficiency is at 90%. Output noise is about 60mV peak to peak. I am pretty happy with the results. My goal now is to add some voltage regulation mechanism too so that I can implement Li-Ion charging. Here is the latest schematic: 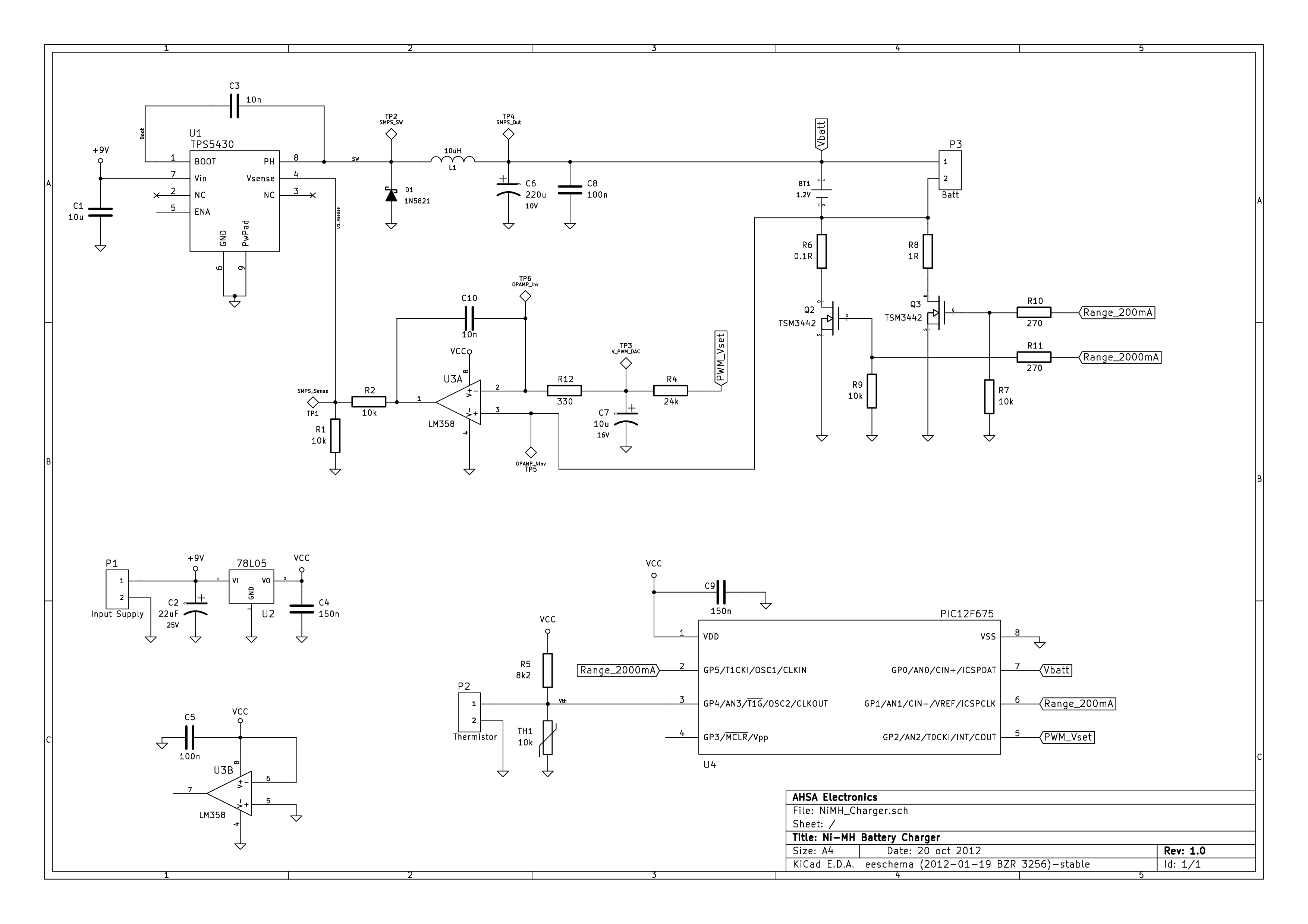 Not the answer you're looking for? Browse other questions tagged operational-amplifier switch-mode-power-supply constant-current feedback or ask your own question.

0
Can an opamp be neither in linear region nor saturated?
0
Find v1 and v2 of a summing amplifier when it is in series with another Op-Amp
4
DAC + op-amp buffer just keeps dying
0
Linear scaling a voltage by 0.1x
1
I set up an amplifier (LF351) for a gain of 5.7, but it is saturating. Do I have to utilize the offset null pins?
0
Op-amp comparator and differential signals
0
What causes the Inverting input of this op amp to conduct current?
3
Op-Amp buffer overshoot