I have a slightly strange question which I asked on many sites but never got a replay that would satisfy me.

I'm looking at a maplin kit and was thinking about what would it take to power a really small LED but from a distance, preferably Radio Stations of (if possible) power lines.

LED does not have to be constantly on or bright, it can glow with barely visible light, it can "blink", it makes no difference.

Also I was looking into using florescent bulb but the issue is that I would like to make this as small as possible.

A good example of this principle would be cell phone flashers but they only work when really close to the source and are to bright.

There's a neat chip called the LTC3588-1 which will let you harvest energy from a variety of sources (piezoelectric and solar being the primary uses). SparkFun has a breakout. 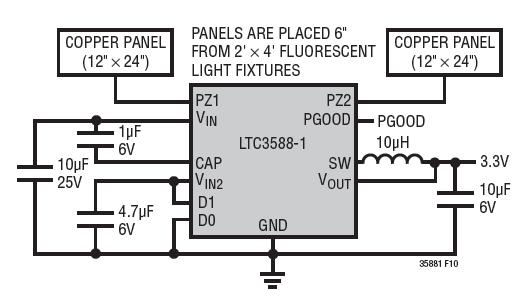 This specific application is in conflict with your statement of "I would like to make this as small as possible.", but it is an option to consider if you can't find anything else.

It can theoretically be done. The biggest problem is making a good antenna. The antenna is basically a long wire but the length has to be specific to the frequency you're trying to harness or at least close. I'm not an RF guy so someone else can chime in, but the ideal length of the wire is going to be some multiple of 1/4 of the wavelength of the signal you're trying to get power from. There are also secondary factors that can help such as using wire mesh (with the hole size in the mesh determined by the frequency you're trying to harness) to reflect and direct the waves towards your antenna. You could even construct a rudimentary dish to reflect the signals to your receiving antenna. Also, you might get better results by designing a PCB to act as the antenna rather than a length of wire.

Once you have a good antenna it's basically the same as any AC->DC power supply. The antenna will produce a sinusoidal waveform which only needs to be rectified and filtered to be used. As everyone has said you will not get a lot of power from this. You'll have to choose your rectifier to have very low dropout voltage on the diodes or you might not get anything at all out of it. Depending on how much power you can squeeze from the signal you might have to charge up a capacitor and flash the LED only briefly when it's full.

Also, keep in mind that it's generally illegal in the US to interfere with radio transmissions. The more power your device draws from the signal, the less is available for everyone else. Reportedly some people have been prosecuted for crimes such as this, but they set up huge antennas very close to transmission towers and blocked out a large portion of the available transmitted signal. You're unlikely to do that with the setup I've described though.

11
Can you harvest electrical energy from the air?
6
Can I wirelessly power mini LEDs?