I am very confused about negative voltage in capacitor, it can even light a led as you can see in the circuit.

2-How can that LED work by connecting its positive to battery's negative pole and its negative to our negative voltage?

I have been searching this for long time, what i found about first question is this site's "Some Capacitor Theory", why capacitor acts like this?

May you please explain it as simple as you can, because i am interested with electronics as hobby, i really don't understand clearly when it is explained in formulas,mathematics etc 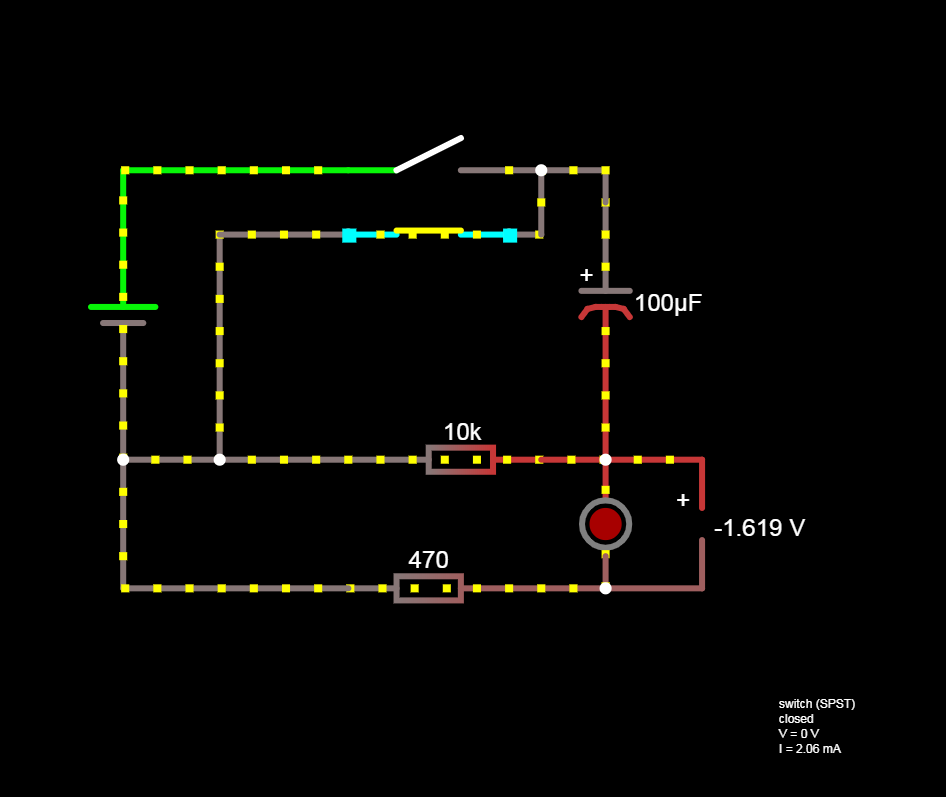 The effect you are seeing is used for ‘flying capacitor’ voltage converters. Basically, the capacitor is storing charge in one polarity, then re-connnected in a different polarity to discharge.

This same principle is used in a now-obsolete LED flasher chip called the LM3909. At the high level, the LM3909 resembles your circuit, except it does something clever: connects the LED across the (-) flying cap to (+) battery, doubling the voltage across the LED. Its ability to run on very low battery for long stretches of time is the stuff of legend.

That's a very strange circuit there. But...

The first thing to realize is that voltage is always relative, that's why it's also called "potential difference". A voltmeter has two probes, to measure the difference in voltage between two points.

The other thing is that the choice of which part of the circuit you call "0V" is entirely arbitrary. If some part is connected to Earth, that's usually called 0V. Otherwise, the battery's negative terminal is usually 0V. But it doesn't have to be.

So if you charge up a capacitor to some voltage, and then connect the positive terminal of the capacitor to the point you call 0V, then the negative terminal must have a negative voltage. There's nothing deep and meaningful about that; it's all down to which part of the circuit you called 0V.

The LED doesn't care which part of the circuit you called 0V. All it knows is that one of its terminals is more positive than the other. Provided that the voltage across it is the right way round, it will conduct.

Not the answer you're looking for? Browse other questions tagged capacitor negative-voltage or ask your own question.

4
Capacitor negative voltage in flip flop circuit
6
Distribution of electrons in a capacitor charge circuit?
2
Capacitor acting as a resistor
0
Capacitor polarity confusion in a circuit
0
Why doesn’t voltage drop to 0 when a capacitor becomes fully charged?
1
Switched Capacitors
3
How do you calculate negative and postive voltages in a grounded circuit?
0
Orientation of Polarized Capacitor in a High Pass Filter