Which is the preferred approach to PCB layout for signal vs power traces in analog circuits, and things to consider?

I have had to layout 2 layer PCBs several times now for analog signals, and am just beginning to learn the process. I often face a similar question in one form or another with regard to laying out signal vs power tracks to avoid crossings, etc, and would like some advice.

I have provided the following dummy schematic to try help explain the question. There is some input analog signal, which then passes through a series of components (in this case, inverting op amps with some gain) to manipulate the signal in some way, followed by an output. There are various resistors which are required in each stage, and also the signal is broken out at various points and sent to connectors. All stages require both the V+ and V- PSU connections.

My question is really about the high level approach to the layout in general, and in particular the power traces vs signal traces. If the components are on the top layer, and the bottom layer is to be flooded with a ground plane (not drawn), there are two obvious approaches I can see: you could either have the power traces brought to the chips on the bottom layer, and then up to the chips using vias (Approach A); or you could bring the power on the top layer and then take the signals to the bottom layer using vias when necessary to avoid crossings (Approach B): 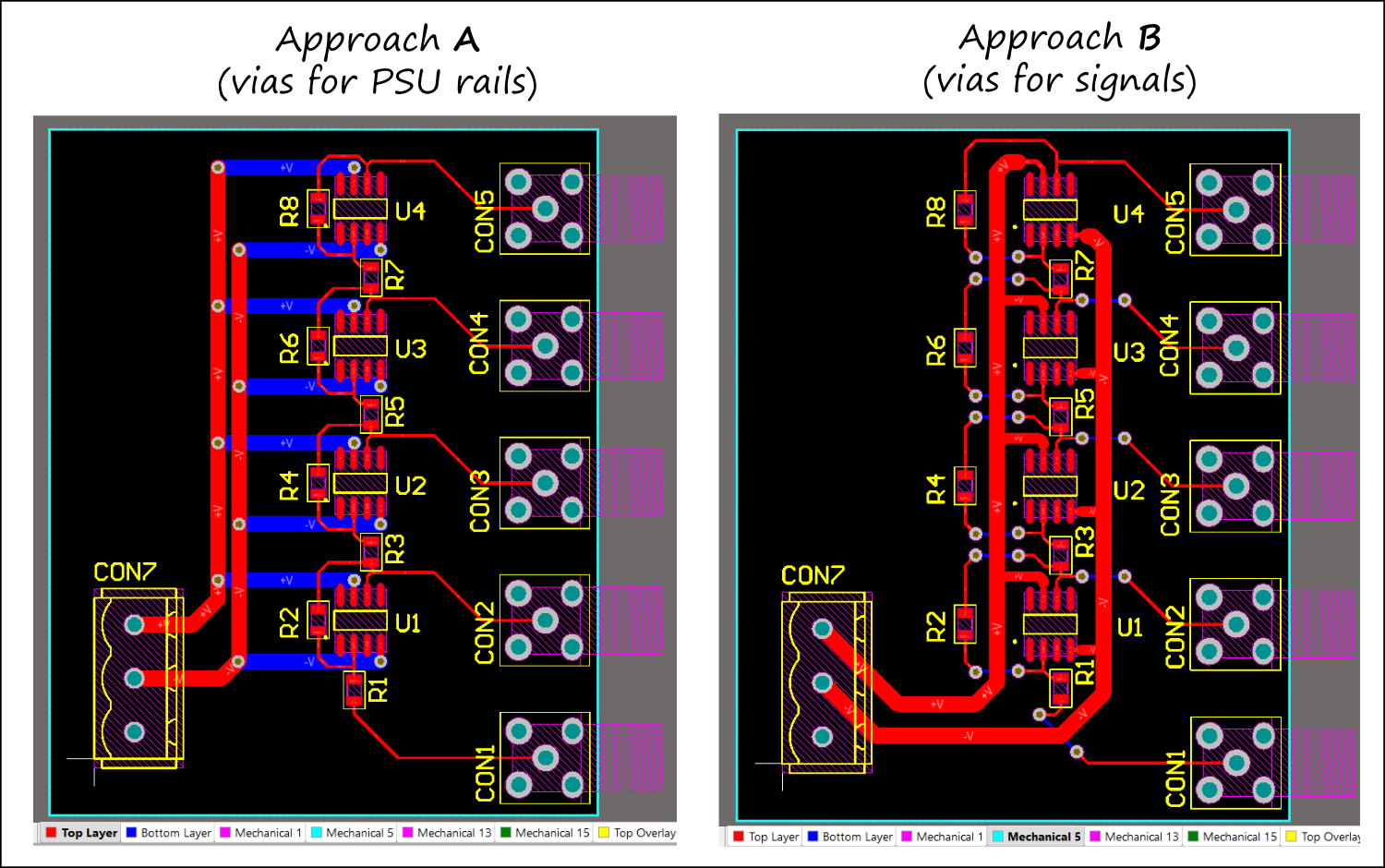 Approach A) : This will in general allow all the signals and components to be kept compact and tight around each of the chips, and signals can be brought to connectors without requiring vias for them. The problem is that the power delivery is more elaborate, and the ground plane on the bottom layer is significantly cut up by the power tracks.

Approach B) : The power delivery here is tighter, without vias, and doesn't break up the bottom layer ground plane so much. The issue is that the signals have to pass through vias to avoid crossing the power.

So my question is what kinds of things should I be worrying/thinking about when faced with laying out power vs signal for such an analog board? How to think about which of these might be a better way to go for future projects? Is there actually a better approach to the layout that I haven't mentioned? Are there any pros or cons that trump all in these situations?

General advice and thoughts would be very welcome.

In general I prefer to use a modified solution A, simply because it seems (in a first pass) easier (and cleaner) to route than B. The significant change (for my solution) is that both layers allow large copper masses similar to a plane to be used - why not include a copper pour on top?

In the following, I've increase the copper area for the power, and included (as commented earlier) bypass caps. Also important is that the power and ground vias were added immediately after placing the ICs. This sort of forces the designer to consider power routing sooner. 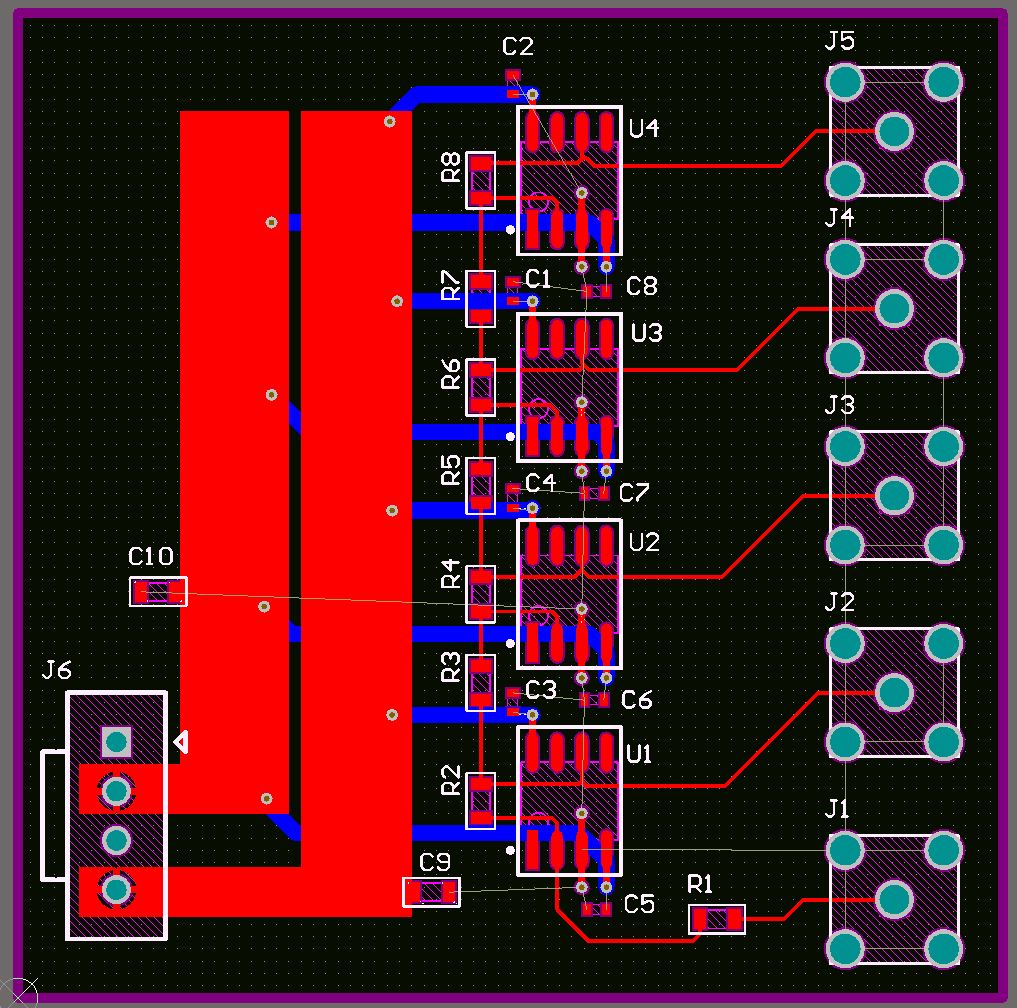 There is a copper GND pour on the bottom layer. And if I really feel like it, I will add a copper GND on the top (keeping with the notion that one cannot get enough GND).

To move the power pours closer to the ICs, move the resister stack to the right side of the ICs. Which leads to the next method B (also modified).

(btw, all those vias in the original B were too much for me :) 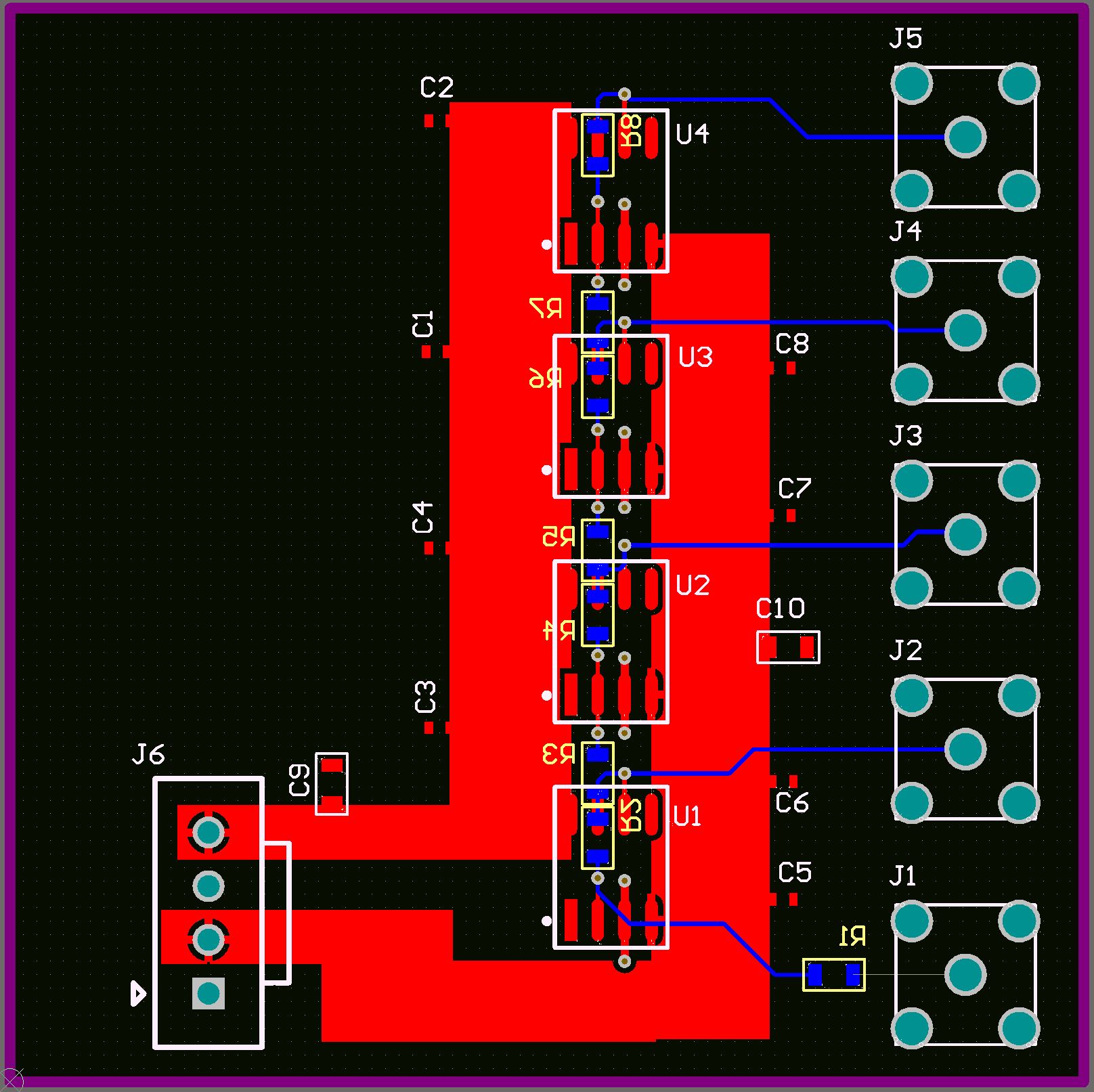 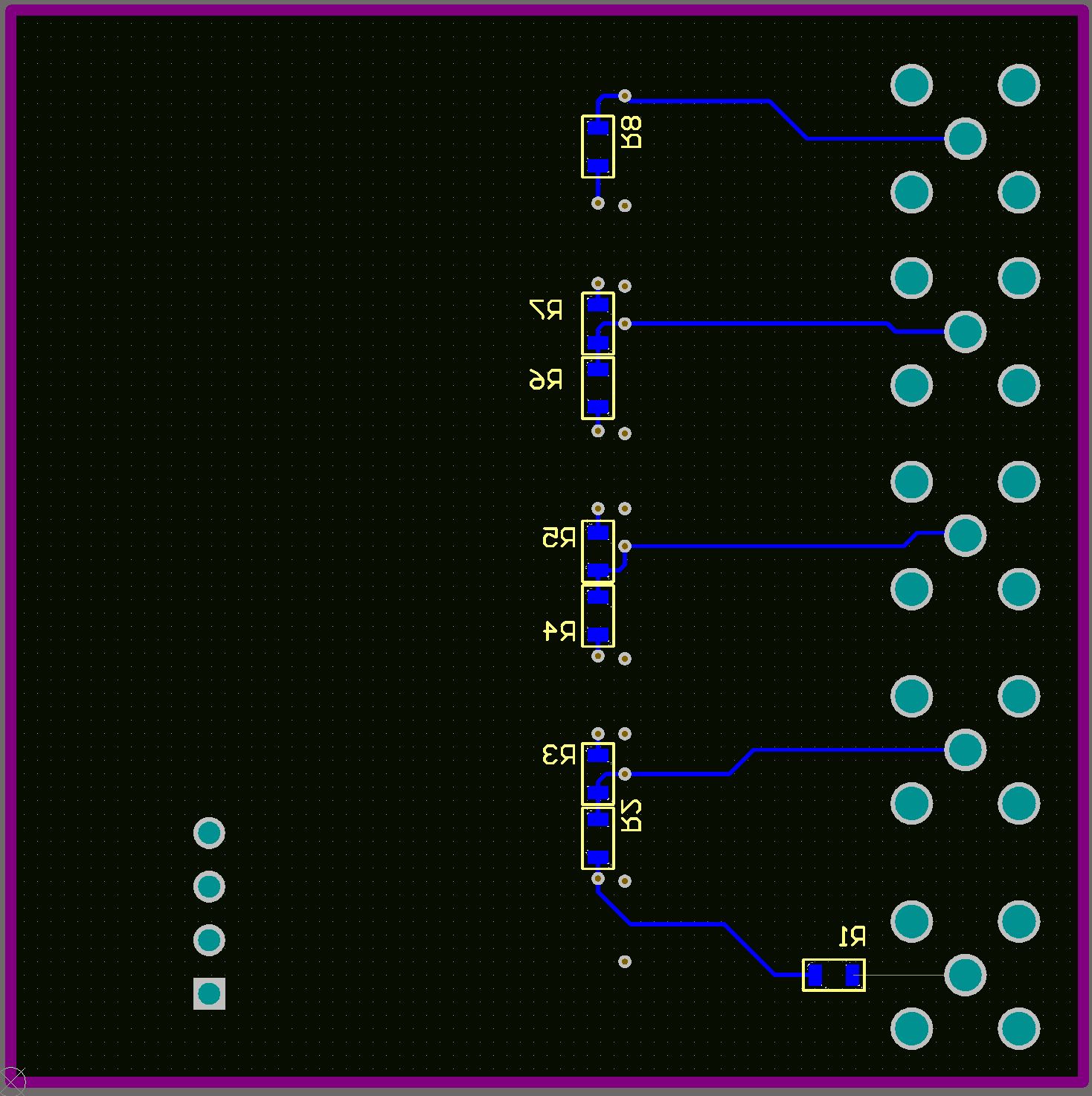 Summary of changes to the original premises:

C2. Method B is necessary for Motor Drives.

The thing you want to avoid if possible is to have your signal paths cross reference plane voids. You will also want to bypass both v+ and v- to ground, since you’re driving signals referenced to ground (SMA connector shield). Try adding bypassing and see how that works out. That said, approach (A) is more what I would choose.

I generally do the really critical nets first, then the local decoupling arrangements (Because they are actually reasonably critical), then the rest of the signal stuff, then fit the bulk power in at the end.

You are also doing yourself a bit of a disservice by considering the ground plane as a magic universal ground, it more or less works most of the time in digital things, and is not inherently horrible the rest of the time, but think about where the currents flow!

While your example is a little noddy to show this, I would actually treat the 'ground' to all those non inverting inputs as THE critical net which should have so far as I can manage no current flowing in it. In a more serious circuit this is hard to manage with just slapping things down to a ground plane. Net ties are your friends.

I would also be far more concerned with the design of the current loops, consider one of the middle opamps, current flows from one supply rail (Which one depends on which quadrant) thru the previous opamp, thru the resistors and then into the output of the next opamp in the chain before returning via the other supply rail. Significant decoupling is indicated at each opamp, and because the quadrant changes (and thus you get half wave current pulses in each rail) you should be careful about just how the bypass caps go to 'ground' to avoid injecting half wave rectified current pulses into your ground.

The best practice for analog circuits is to reduce the loop area of the signal and its return path and keep the impedance as low as possible. WHen not possible then the impedances must be balanced to reduce the common mode noise becoming differential.

When there is no circuit noise or ambient noise, with low impedance there is no need for a ground plane. Noise voltage is simply noise current * circuit impedance. f (V(f)=I(f)*Z(F) where Z(L)=2piL for a short trace of 0.5nH/mm or a longer wire of 1nH/mm. (>40 l/d ratio) 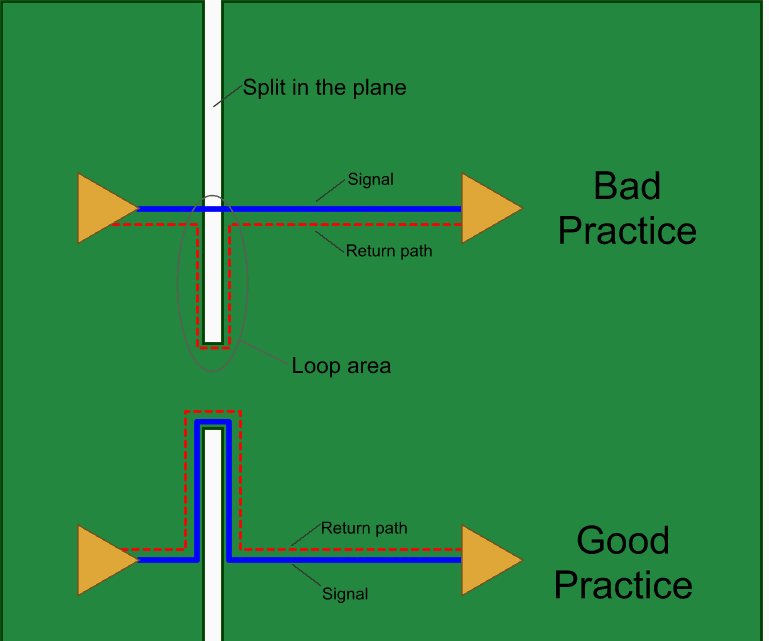 Although this mainly for RF or rise times< 20ns can you see the difference in signal+return loop area in the above?

You must learn to define specs for every design so you know what you can test to be sure it works. This includes stray spectrum and level of EMI in terms of uA/m or mV/m and slew rate or freq. of both. This includes SMPS, AC power , motors, switched inductors etc. near any cables. THen you need to specify spectrum and signal minimum level then finally minimum SNR required. THis includes DC offset which you can trim on 1st stage.

Putting the cable into a 10:1 scope probe can measure your stray voltage @ 10 MOhm load. Terminating it and then shunting an RF cap to earth gnd to reduce EMI levels. Finally using a telephony or LF/HF CM CHoke to further balance the signal for the frequency range of interest.

After all this is done, then look at the crosstalk in your logic and SMPS routing to high impedance signals, then even with this you may not need a ground plane. Even Yamaha Audio equipment designs can get away without this.

After you have done this then you can decide if you even need a ground plane, but you may always need an RF cap to AC ground to shunt low frequency line and SMPS common mode, CM noise.

Since you are using SMA connectors , I assume SNR is important and using the OP07 which has 75uV low input offset voltage with a few nA of bias current makes the input impedance very high. Yet grounding the other input makes the input very unbalanced. SO before you consider a ground plane make your signal balanced with a differential R ratio using 0.1% or better an INA arrangement of 3 Op Amps with > 100 dB CMRR. This is your first step to eliminating stray cable induced EMI. A pot can easily null DC offset, then with selectable single R's you can change gains with analog switches.

46
Competing PCB Crystal layout recommendations
12
Details on PCB layout for microcontroller
3
Grounding and Signal Integrity of my PCB Layout (ADC, SMPS, SD card, USB)
2
Shunt resistors and PCB layout
2
Potential Difference in the Ground plane
0
Can I use a split power plane as an alternative to traces?
2
PCB layout and stackup for space application
4
Signal integrity: ground plane vs ground traces between signals