I'm working on designing my own headphone amplifier with extremely high fidelity. One thing I want to incorporate is a circuit to control the gains of the two channel's using one single-channel potentiometer, and I want to use op-amps and discrete components for high precision channel to channel matching. A circuit to do exactly this is described in this article, but the schematic picture has 404ed. I'm trying to recreate the schematic from the body of the article. The key is that the wiper of the potentiometer is grounded, so we have two resistors varying inversely. There are some concepts like positive feedback which are difficult for me to intuitively understand, so I was only able to get partway. I'd really appreciate some help in recreating this circuit.

Definitions, from a lot of rereading the article:

Here's what I have so far, and my rationale.

A1 is in a non-inverting configuration with the gain network defined by passive resistors with values RG and R, and the voltage on the noninverting input is K*V1.

One of the potentiometer's end terminals is on the non-inverting input of A1, and is receiving a constant current from a positive feedback network. This current is setting the voltage on the op-amp's input terminal. As to the network that is giving it that constant current, I have no idea. 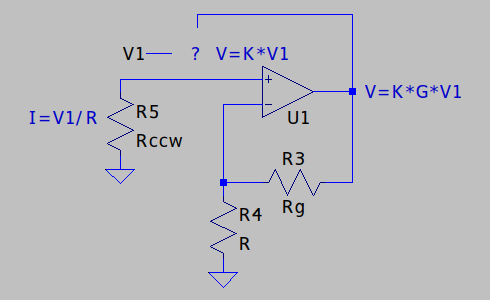 This sounds like the same topology as U1, since the other potentiometer resistor section would be changing inversely to K.

This is some form of differential amplifier circuit, with the output of A2 going into the inverting input network and unmodified V2 signal going into the non-inverting input. I'm not sure how the mentioned "attenuation in the feedback network" or the final gain value were attained. Presumably we have a bit more freedom here.

Positive feedback from A1's output to P's CCW terminal results in constant current drive to the pot... the differential voltage seen by A3...

From this I figure that each half of the pot is driven with a current proportional to the input signals. The voltage across each half is proportional to its resistance, so as the pot is turned the volume 'fades' from one channel to the other. A differential amplifier then subtracts the second channel's pot signal from the input signal, to produce a signal whose volume tracks the other channel.

We may never find out exactly what was in the circuit described in the article, but the schematic below reproduces its basic functionality. 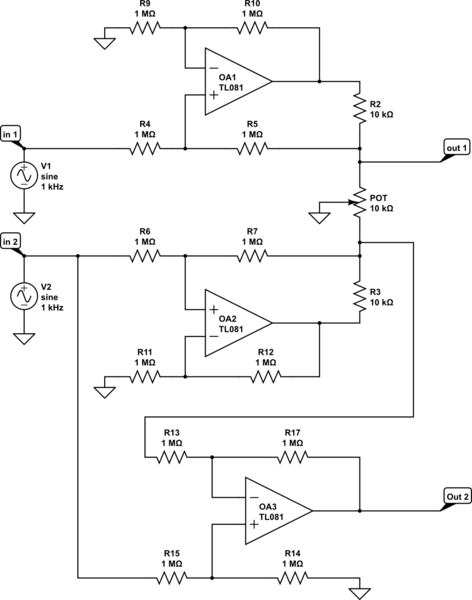 In this circuit op amps OA1 and OA2 are configured as constant current generators controlled by the input signals. R2 and R3 set the current through each pot half to 0.1mA/V, which produces 1V/V (ie. 0dB attenuation) across the pot half when at maximum resistance. OA3 takes the signal from one half of the pot and subtracts it from the input signal to 'invert' the volume level on that channel.

Here's an LTSPICE simulation of Woodward's circuit done by someone on DIYAudio: 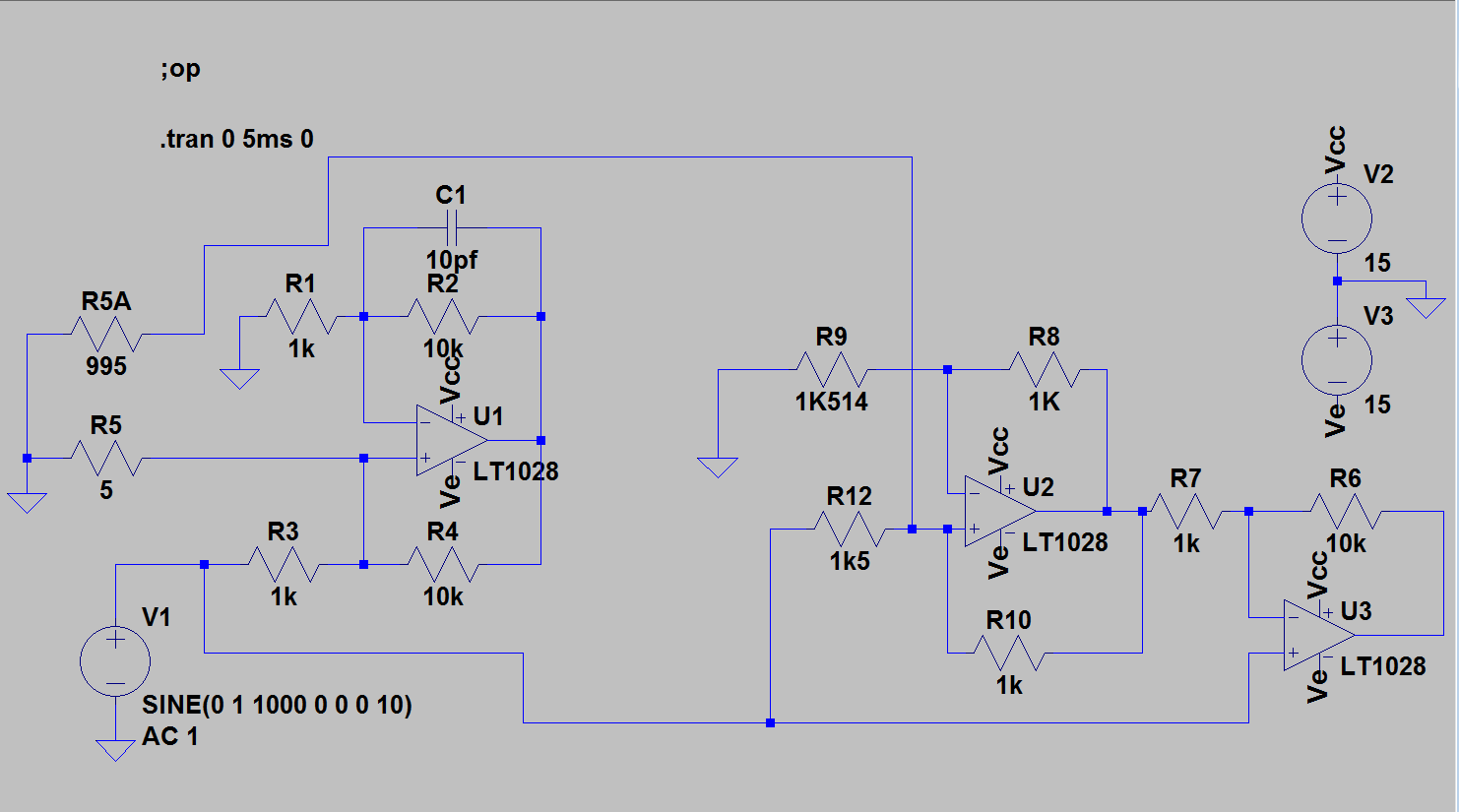 It's interesting (in theory anyway).

Not the answer you're looking for? Browse other questions tagged operational-amplifier audio analog circuit-design positive-feedback or ask your own question.

0
How to control the gain of more than one TDA2030/2050 IC with a single potentiometer?