I'm having a very odd issue using an integrated DC-DC isolated converter module. As the module stabilizes, a massive pk-pk ripple is developing on both the output and the input. At first we thought this might be induced by characteristics of the circuit it was supplying or its own supply, but even after completely removing the module and simply using it to drive a resistive load we are still seeing this symptom. To be clear, the module does output exactly an average 4.995VDC given a 48VDC supply, but the ripple is 1.29V pk-pk! Has anyone else seen this behavior before that might be able to offer some clues? Scope shots and details below:

This is a scope shot from VOut-. Pk-pk noise is 1.29V. The periodicity of the transient exactly matches the switching frequency of the DC-DC. 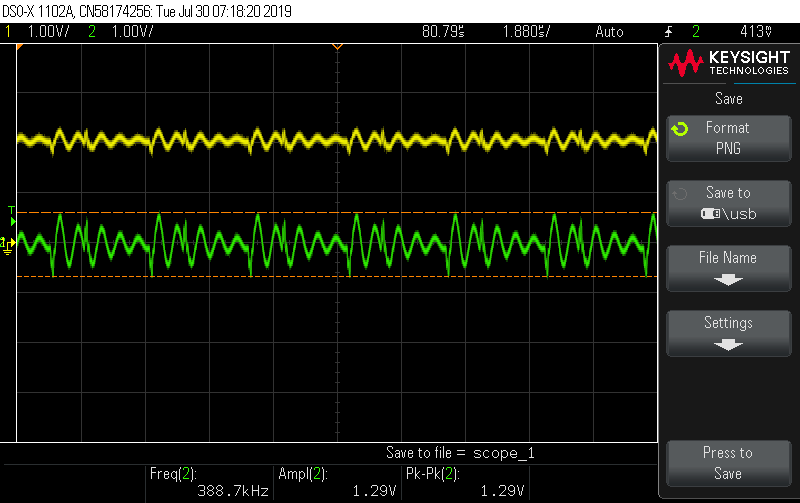 This is a shot from VIn- where a similar transient is observed 6.67V pk-pk noise! 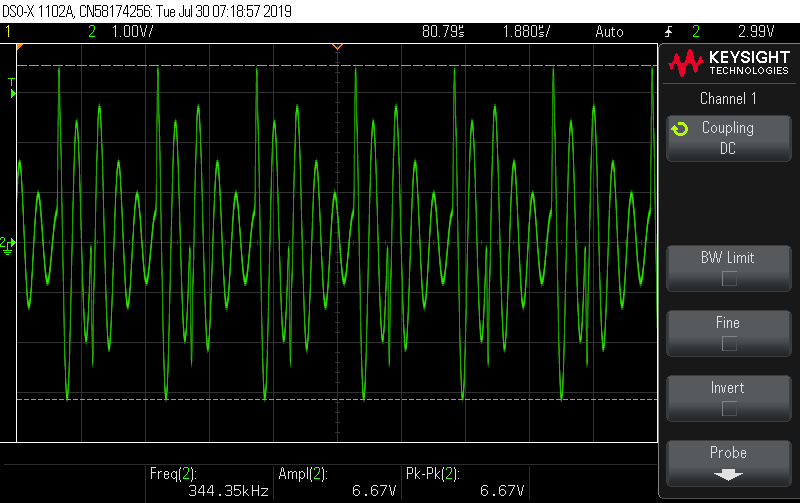 To take our particular application circuit out of the equation, this is the test setup I am using (constructed using the shortest possible soldered connections on a perf-board):

There seem to be two issues contributing. One is the bench-top power supply being used which itself introduces significant ripple. Second is defeating the DC-DC converter's isolation by shorting VIn- and VOut- together. The three images show each condition. Even the 180 mV pk-pk noise in the best case (powered by battery), while potentially acceptable in the application, is double the datasheet specification (75 mV)!

It just gets worse from there. Ripple is 460 mV pk-pk when the DC-DC is powered by a bench-top supply (with identical results from several other switching AC-DC converters I had lying around). Finally, ripple worsens to 1030 mV pk-pk if VIn- and VOut- are shorted to defeat isolation and bring input and output ground to the same reference (while powered via battery). What's going on here, is it possible this is just a marginally stable poorly designed DC-DC module? 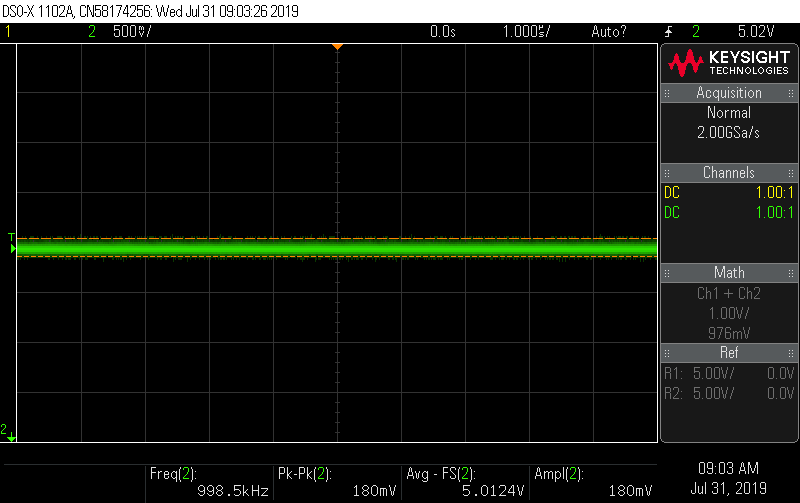 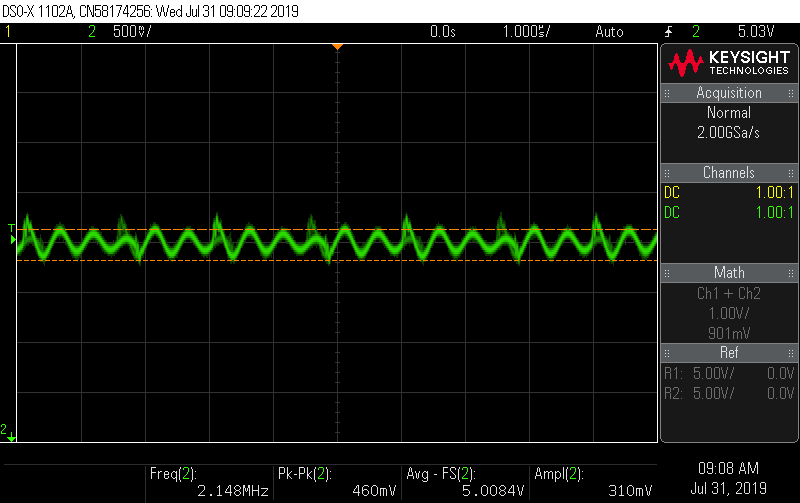 Powered by battery, with isolation broken using an 18awg wire short directly from VIn- to VOut-: 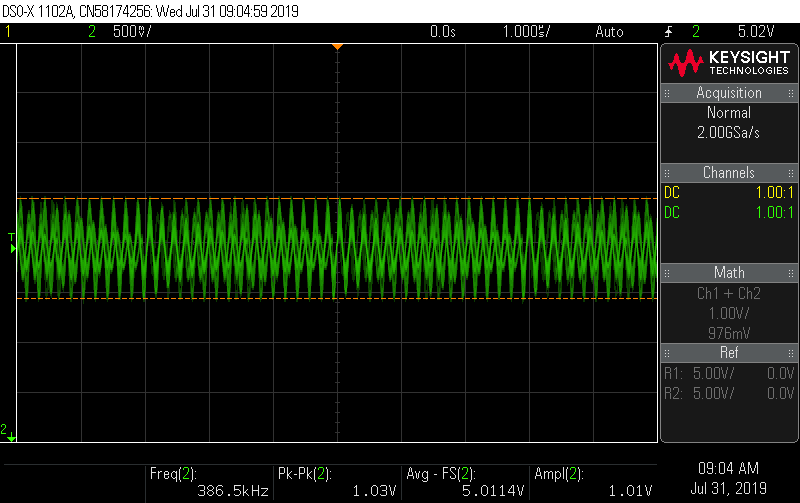 It's been some time since I opened this question but I wanted to share the ultimate solution to help others new to diagnosing switching mode power supply characteristics (many of the comments helped but @VoltageSpike and @Elliot Alderson really set me on the right path).

In the end this was mostly a matter of not understanding how to probe the transient voltages produced by an SMPS properly with an oscilloscope. After reviewing several different references:

Using a "paper clip" ground to create the smallest possible measurement loop made a dramatic difference in the quality of my measurements! (as shown below) 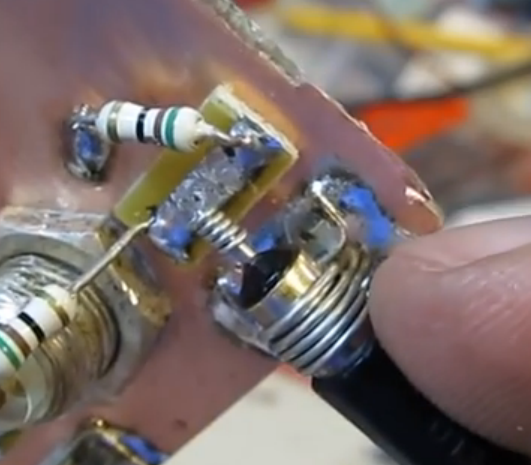 Here is an example of the ripple and voltage transients which originally motivated me to post this question. In this case the probe tip is applied to the 5V rail and the probe ground is connected to a grounded mounting hole several inches away using the probe's alligator grounding clip (pk-pk ripple is 386 mV): 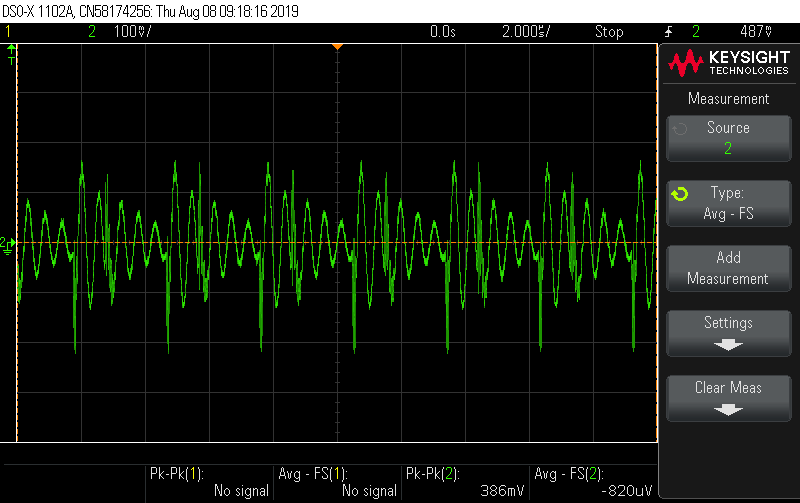 Now that same supply, with no other change and supplied power by a bench-top power supply, is probed using the "paper clip" ground point directly across the bypass capacitor nearest the output of the DC-DC SMPS 5V output (pk-pk ripple is 20.1 mV, well within the DC-DC module's specification): 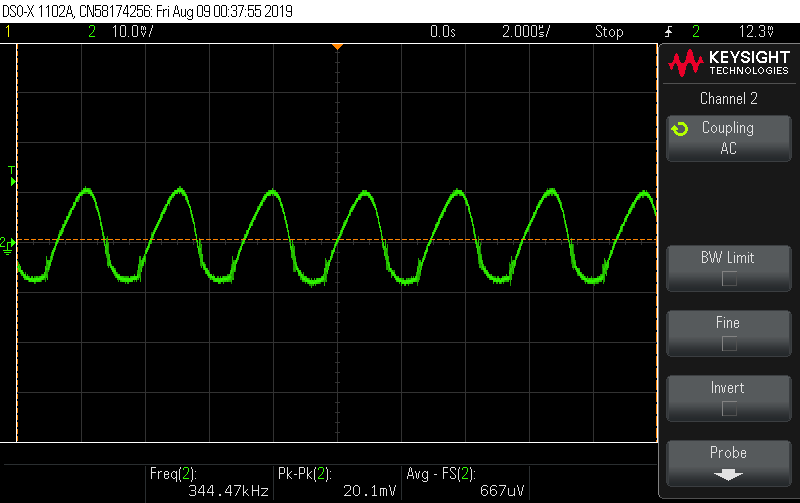 In the end, this new probing method even allowed me to pinpoint a previously un-diagnosed noise source in the form of an ornery charge-pump based TTL -> RS232 transceiver which could be squelched by adding a second 1 uF ceramic bypass capacitor near the source.

Not the answer you're looking for? Browse other questions tagged power-supply dc-dc-converter isolation switching-regulator transient or ask your own question.

0
Problem with transient on power rails

9
Power Supply Noise
2
Grounding a DIY power supply
1
Switching power supply 12V/3.3V for battery powered application with SLEEP mode
1
Connecting grounds when using an isolated DC/DC converter
8
Why is the regulation of my 5 volt power supply so poor and how to address it?
4
How can I determine maximum load current limit of DC-DC step up switch regulator?
1
3.3V Buck-boost converter outputting voltage too high
0
DC voltage ripple help