In smartening up my doorbell I've been playing with my illuminated pushbutton and have fallen into a bit of a rabbit hole. The doorbell normally:

My understanding of this is that when the switch is open the bulb lights up and there is not enough current to fire the chime. When it is closed the short circuit then provides enough current to the chime to fire its coil. I used my multimeter to discover that the pushbutton lamp has a resistance of 60ohm, and the chime 6ohm. The AC source is 8VAC.

My enterprising idea was to replace the chime/coil with an optocoupler which would trigger something downstream (an ESP32 in my case). First I tried to get it all working with an LED, so to end up with a lit bell that lights the LED when pressed.

Here the lamp is always off, and the LED is always lit. Which is expected - the current is way too low for the lamp due to the now larger resistance. But reducing this resistor will probably burn out the LED. So:

To be clear I'm more interested in learning here than getting a working circuit - aside from solutions using mechanical relays and current sensors I'd probably choose to just use a normal (ie not illuminated) doorbell instead.

I would try something like this. You want the new circuit to have roughly the same characteristics as the chime. I don't know enough about the details to give exact values.

The value of R1 needs to be small enough to light the lamp, but not too small or the transformer will be stressed when the button is pushed. See if you can see the rating of the doorbell transformer, they are often mounted directly on the main breaker box. R1 should be sized (wattage) so it doesn't burn up if the switch is held closed.

D3, or several diodes in series, or a zener, is optional, if needed to raise the threshold so the opto isn't on when the switch is open. I am assuming that 60 ohms is the cold resistance of the lamp. The hot resistance should be high enough to keep the opto off. 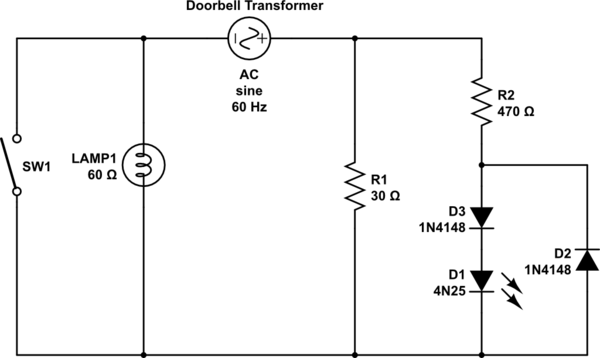 Not the answer you're looking for? Browse other questions tagged led ac opto-isolator solenoid incandescent or ask your own question.