I have built the circuit in LEDs and high currents and it works well - when the switch is open, the incandescent lamp lights up but the LED doesn't. When the switch is closed, the lamp goes out and the LED (actually an optocoupler) lights up.

I'm now trying to understand how it works, and also what value I should use for R1 below. For this exercise I've omitted D2 from the schematic and am assuming low resistance for D1. The bulb has a cold resistance of around 60Ohm, and I've arbitrarily multiplied that by 15 to get the hot resistance.

I have annotated what I believe to be values for P, I, V (and R where necessary) using my basic high school knowledge:

Here we see the current too low for D1 to fire, which is what was wanted. Total current is 8.5mA, well within the tolerance of the 2A transformer.

With the switch closed, the bulb can be ignored.The current at D1 now jumps and is enough to fire the LED. The total current is 0.3A, still way within the capacity of the transformer.

I have found that I can use up to 100Ohm for R1 while maintaining adequate illumination in the lamp, and lower values for R2 while maintaining that switching functionality so want to play around with values in order to get R1's power value down - unless there's something fundamental about the circuit that would mean it stays the same.

My question then: I've used simple DC series/parallel formula for this AC circuit. Do those still hold or have I made some bad assumptions?

I gather the existing circuit is something like this:

Incandescent lamps have a widely variable resistance based upon their temperature. But in your case, the lamp is usually lit because the doorbell switch isn't pressed. So I'm assuming you've somehow measured the current through the lamp and have inferred from that the effective resistance, while hot, as \$900\:\Omega\$. (If, instead, you measured the resistance when cold then you need to let me know that fact.) The above circuit implies that the power dissipation in the doorbell lamp is about \$70 \:\text{mW}\$. And I don't find that difficult to believe. So let's go with that, for now.

You want to replace the right side "Bell Solenoid" part with something that can be interfaced into an MCU. (I'll assume for now that this also means you've disconnected the doorbell solenoid for this purpose.)

The inductance of the doorbell solenoid isn't really important, if so. So that can be ignored. From what I gather from your comments, you've found that up to about \$100\$\Omega\$ impedance used to replace the doorbell solenoid seems to provide acceptable lighting for the doorbell lamp. So I'm banking on that research you've done, so far.

The main thing is about how you might replace the doorbell solenoid with a circuit change that will allow your MCU, with some software, to recognize when the doorbell switch is closed ... vs when it is open. I'm going with that understanding for the following.

The following replacement should be fine. Note that the output signal uses the doorbell transformer voltage to drive current into the BJT base but that it uses the MCU's \$V_\text{CC}\$ to translate the final output voltage range to what's used by the MCU. 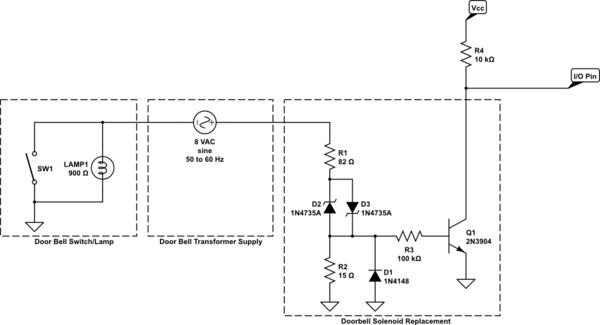 The pair of zeners can be something rated for, perhaps, \$6.2\:\text{V}\$. This isn't critical, though. Just find something nearby.

When the doorbell switch isn't pressed down, one or the other of the zeners will be conducting like a diode and the impedance will be close to \$100\:\Omega\$, allowing the lamp to light very close to normal (per your experiments.)

But when the doorbell switch is pressed down, bypassing the lamp light, then the entire doorbell transformer voltage is applied to the replacement doorbell solenoid circuit. Both zeners will fire at some point on each half-cycle. One half-cycle will bypass through \$D-1\$. But the other half-cycle will go through the base-emitter-junction of \$Q_1\$. This half-cycle you can observe via the I/O pin of your MCU.

I had mentioned a DIAC. But I don't know of any with a sufficiently low voltage to suggest. So I am suggesting two back-to-back zeners here, instead.

LEDs require a certain minimum voltage to turn on at all. For an infra-red LED this would be around 1.5V, maybe a little less.

With the button closed, the voltage across R2 and D1 combined will be about 8V RMS. The LED will take about 1.5V, leaving the rest across R2.

So long as you ensure that the voltage across R2 and D1 combined is well below 1.5V, you should be able to adjust R1 as desired. Be aware that the peak voltage of 8V AC is about 11.5V.

You really should put in a reversed diode in parallel with D2 to protect it from the reverse voltages.

Not the answer you're looking for? Browse other questions tagged voltage power current resistors incandescent or ask your own question.