Is it always regenerative braking? Or depending on ramp-time may it be also plugging?

Yes, the VFD will continue to commutate during deceleration - this time with the frequency lower than that of the motor so that the slip is negative. The current is dumped into the DC link (C in Figure 1). 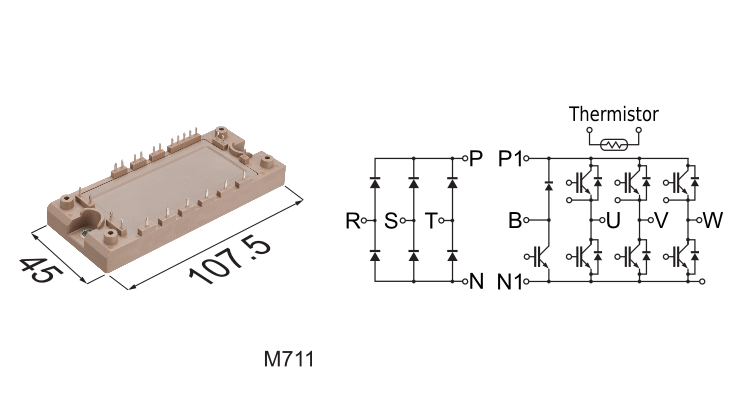 The module shown in Figure 2 includes a three-phase rectifier, the P-N output to the smoothing capacitor, P1-N1 input to the IGBT section and the UVW outputs to the motor. The braking resistor will be connected between P1 and B.

VFDs do not allow plugging due to the stress on the switching devices. Most VFDs are probably sufficiently protected from damage is plugging occurs, but it is generally considered to be an abuse of the product.

As described by @Transistor, regenerative braking tends to occur whenever the operating frequency is reduced. As soon as the motor becomes a generator, it begins to supply its own losses and some of the losses in the VFD. That means that some level of braking occurs without switching in a braking resistor. Even though the mechanism of braking is called regeneration, dissipating the braking energy in a resistor is generally called dynamic braking. Regenerative braking generally means returning braking energy to a power supply that can accept the energy and use it elsewhere.

Many VFD products do not provide a built-in braking transistor. Those products protect the VFD from regenerative energy by limiting the rate of deceleration. Most VFDs have the ability to do that even if they are equipped with a braking circuit. As a backup, VFDs are generally equipped with a DC over-voltage trip circuit shut-down provisions that can safely de-energize the motor to a coasting condition.

There is a VFD braking mode in which DC is applied to the motor windings. That is sometimes provided for induction motors without a VFD. That is called DC Braking or sometimes (unwisely in my opinion) called DC Dynamic Braking. Many VFDs, probably most, have DC Braking built in as an optional configuration setting. Other questions here have one or more answers describing that.

There are 4 different methods of braking a motor that VFDs can use. Two of them, Dynamic Braking (DB) and DC Injection Braking (DCIB), are included in most standard VFDs.

Charles Cowie already described the Dynamic Braking wherein the kinetic energy in the rotating load is transmuted into electrical energy and pulled off of a motor by making it a generator, then is converted again into heat energy in a resistor (or distributed out to other inverters on the same DC bus), removing it safely from the motor.

In DCIB, the transistors are fired in a pattern that pumps DC into one set of windings in the stator, setting up a now stationary magnetic field. As the rotor bars pass through that field, they create a counter-rotating magnetic field that opposes the direction of rotation and brings the motor to a stop. In this method, the kinetic energy of the rotating mass is absorbed by the motor rotor and stator, so it has negative consequences if over used.

The third braking method is called Flux Braking (FB) but requires the use of a good quality Vector type VFD. This is because in Vector Control, the VFD can calculate and separate the flux producing current from the torque producing current, which is one reason why Vector control can be so much more accurate. The normal goal in doing this is to give the motor only JUST ENOUGH flux current to excite the windings without overheating them, reserving more of the available current for producing torque. But in Flux Braking, the VFD turns the motor into a generator just as in Dynamic Braking, but instead of pumping that energy into external resistors as heat, it purposely consumes that energy by increasing the flux current into the motor. So what it is doing is using the MOTOR as the braking resistor. FB therefor has similar possible negative consequences seen in DCIB, but does not require the external resistors like DB. Not all VFDs sold as "Vector Drives" are capable of this, it takes a true Flux Vector Control capability drive.

The fourth braking method, Line Regenerative Braking, requires another different type of VFD, called an "Active Front End" (AFE) topology. Instead of the simple passive diode bridge rectifier, the VFD has another set of active transistors on the front-end converter section, called a "Line Inverter" (as opposed to a "Load Inverter"). So again, taking the regenerated energy off of the motor, the Line Inverter then pumps that energy BACK into the line side to be used by other AC loads in your system. Like DB and FB it removes the energy from the motor as a generator, but instead of "wasting" it in a resistor or into the motor flux, it is recaptured for use elsewhere. The downside of this type is that the VFD is significantly more expensive because you are using two inverters back-to-back. It's not quite twice the price of a standard VFD, but it is a lot more money. However if your duty cycle is high and/or you need to provide continuous or near continuous braking, this method provides a major benefit.

Not the answer you're looking for? Browse other questions tagged induction-motor vfd braking or ask your own question.

0
Can I ground the negative DC bus of a variable frequency drive?

1
VFD: Regenerative overvoltage trip during deceleration or stop
0
AC induction motor controlled by TWO TRIACS. They blow down
1
DC link capacitor for induction motor drive
0
Braking Methods in Induction Motor
1
Unknown induction motor wiring?
0
How reliable are motor power ratings through time (old motors vs new motors)?
0
Pole counts for VFD driven induction motor
0
How is power consumed by an induction motor calculated based on speed (from a VFD) and torque induced by the rotor shaft?