I'm back working on my friend's 807 tube transmitter. I've had some previous posts on this and I'd like to thank all the people who responded for your help!

I bought an oscilloscope and a dummy load and almost instantly figured out the power problem. It's the 807 screen grids. With the current schematic, the 807 screen grids run at about 100v. Power output calculated across the dummy load is 4 watts RMS. If I increase the screen grid voltage to 250v, the output jumps to more than 10 watts RMS. The tube manual for dual 807s, class A, calls for 600v plates (which I have) and 300v screens.

Here's the problem: When I increase the screen grid voltage on the 807s, the modulation disappears. In the diagram, you'll notice the switch that controls the 807 screen grid voltage, also controls the EL84 audio amplifier plate voltage. What is the correlation here? What can I do to fix it? Do I need more peak to peak voltage on my input? I'm currently using an old cell phone with a tone generator for testing. Input voltage to the jack and 12AX7 is about 1.5 Epp.

Any help would be appreciated! Schematic is below. Thanks! 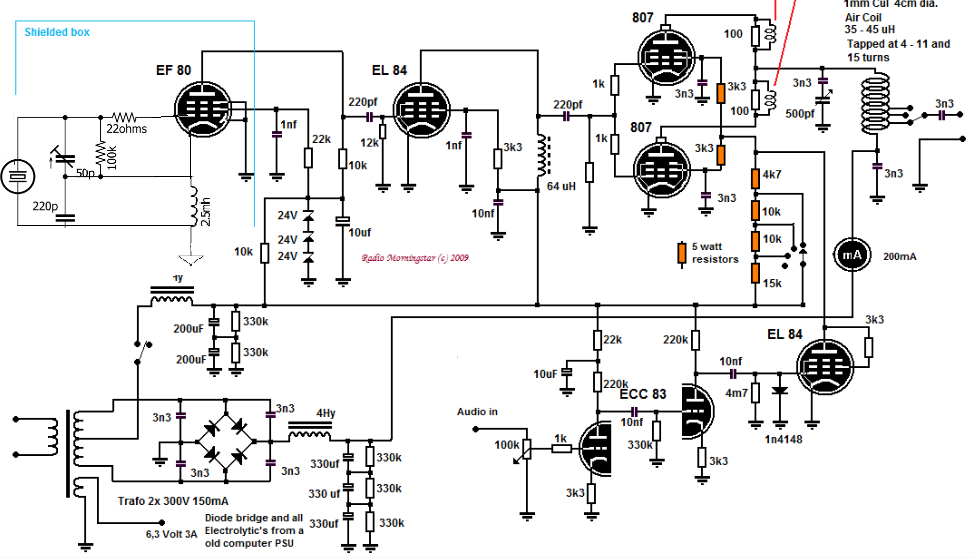 (Caveat -- I'm a toob fan-boy, but I don't have many actual tube circuits under my belt. They're just vacuum-mode FETs to me.).

The final amplifier stage is screen modulated. Either someone is mistreating the EL84 in the lower right corner of the schematic, or they're being very clever and you are under-driving the transmitter.

If you look at this datasheet you'll see that the EL84 is not rated for positive grid voltage. It pulls a lot of current at 0V on the grid, in fact. I was going to say that this is a Bad Thing, and that the biasing of the amp is all messed up -- but then I noticed the diode on the grid of the EL84 in the lower right corner (now, wouldn't saying "D1" be easier?)

If that diode is doing what I think it's doing, then when the transmitter is idling, there will be very little voltage on the screens of the 807s, by design. When you input audio to the thing, the peaks of the audio waveform at the grid of that EL84 will tend to charge up the capacitor on the grid of that EL84. Then on the next down-swing of the audio, the EL84 will conduct less, the 807 screens will go high, and you'll actually see some transmit power.

So -- try feeding it with higher-level audio, see what happens. If you don't have enough audio out of your cell phone, build or by an external amplifier, or add another stage or two of amplification to the transmitter.

When you increase the screen voltage (presumably by reducing the resistance from the screen to B+), then you reduce the audio gain in the screen circuit. That would be why your modulation disappears -- you're essentially shorting out the final stage of audio amplification.

Not the answer you're looking for? Browse other questions tagged rf transmitter vacuum-tube ham-radio amplitude-modulation or ask your own question.