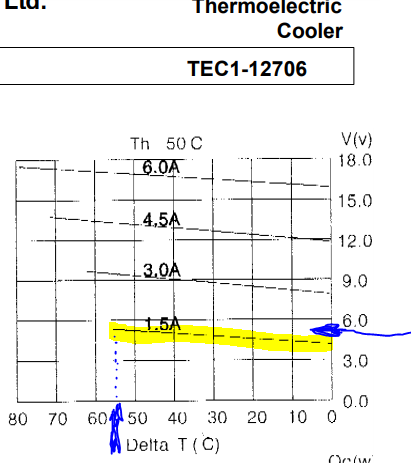 Here's the relevant graph from the datasheet. This is a 40mm x 40mm x 3.9mm Thermoelectric Cooler (TEC). I added yellow highlight on the 1.5A curve. assuming that you're driving the TEC from a constant-current 1.5A source, with available compliance voltage of at least 6V. This typical operating characteristic curve shows that under all of these conditions:

the resulting performance is

Note that the line stops between 50°C and 60°C for the 1.5A drive current, this implies that is the condition where the TEC can't achieve any further heat removal. At higher currents the delta-T endpoints increase, but with diminishing returns. The TEC has to move not only the hot-side heat but also its own internal heat.

If the TEC is instead powered with a constant voltage 12V supply that was capable of delivering at least 4.5A, then the drive current would be somewhere around 4.0A to 4.5A, depending on the temperature difference.

If the power supply is rated 12V at 2A maximum, something has to happen when the load tries to draw 4.5A. Either the supply will shut itself down (because it thinks the load is a short circuit), or the output voltage will reduce until the load only demands 2A. Or worse, the supply might oscillate, repeatedly shutting down and trying to restart. I don't think the 12V 2A power supply is a good match for this particular TEC.

Just a couple of general words of advice about TEC and heat removing applications:

After the TEC has been running for awhile and the heatsink is warm, and then the TEC drive current is shut down, heat will flow back from the (now very warm) heatsink through the TEC back into the cold side. The cold side is now cooler than ambient, and the hot side is much warmer than ambient. So unless the cold chamber has a great deal more thermal mass than the heatsink, then as soon as you switch off the power, your homemade refrigerator becomes an oven. Surprise! Eventually the heat sink and cold chamber reach thermal equilibrium at ambient temperature. For a CPU cooler that's probably acceptable, but if it's cooling some food or medicine that would be spoiled by high temperature, that could be an issue to watch out for. Adding some thermal mass (like water bottles) to the cold side would help avoid this issue, but the tradeoff is that it will also take longer for the system to cool down.

It's possible to pass 1 or 2 amps from a constant current source through a 12706, at which point the voltage across it will be somewhat less than 12v. Many easily obtainable buck converters have a constant current output mode that's settable to do this.

Alternatively, you can supply a lower voltage, such that it draws 1 or 2 amps, again using a buck converter to set the lower voltage.

At the low current, the 12706 will run at a much better COP (coefficient of performance, aka efficiency), but will not achieve as high a temperature difference or pump as much heat as it would at the higher voltage.

Not the answer you're looking for? Browse other questions tagged power-electronics peltier or ask your own question.