Difficulty of implementation of this Rayleigh variate generator on simpler FPGA

For a university module we have been tasked with a 'research project' whereby we need to implement an FPGA non-uniform variate generator. I've identified one possible choice for the specific distribution I was assigned - the Rayleigh distribution. I'm now trying to deduce if this design from literature will be possible for me to implement as a 16 bit version. I will be using a Terasic P0082 Cyclone IV De0-Nano which is a much simpler board than the one the authors used.

I have very limited exposure to FPGA and VHDL and so it is difficult for me to judge the complexity of implementing this design. On the surface it looks tame but the specifics of implementing the State Memory, Addressing Unit and Coefficient Memory in VHDL are unknown to me.

My question to more experienced FPGA designers is what they think of the complexity of this design. Is this something that would be easily implementable on the FPGA mentioned above for an undergraduate student or will this be a significant challenge?

The implementation from literature is based on the Box-Muller method and was implemented on a Xilinx Virtex-55VFX200TFF1738 FPGA. The design comes from A. Alimohammad, S. F. Fard, and B. F. Cockburn and their paper titled "Hardware Implementation of Rayleigh and Ricean Variate Generators". In the paper they give the design as: 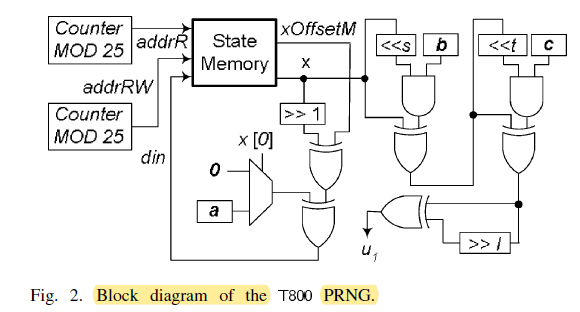 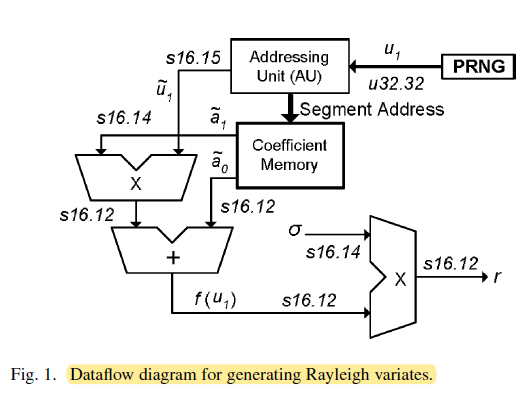 my main concern - that not enough detail is provided to be able to successfully implement. I should have probably phrased the question as such.

Most important is if the papers describe the algorithm fully and in sufficient details.

I have done a lot of algorithm to Verilog conversion.
My approach is first to convert the algorithm to C, test it en then convert C to Verilog. Of course for the first phase I have the advantage, that with a lot of HDL experience, I know pretty well what C constructs can easily convert to HDL. (It also help that Verilog and C look a lot the same.)

The C model also help with debugging, it allows you to quickly verify where your HDL code produced different/erroneous results.

The abstract of the paper gives the resource utilization, which is very minimal; additional details are given in the body of the paper. There clearly would be no problem fitting this into any FPGA that has block RAM and hardware multipliers.

The Cyclone IV may or may not be able to achieve the same raw speed as the Vertex-5 — how important is that to you?

Not the answer you're looking for? Browse other questions tagged fpga random-number statistics or ask your own question.

9
All Digital Phase Lock Loop
12
FPGA firmware design: How big is too big?
1
How to check output after FPGA Implementation?
1
Timing complexity for correlation implementation on FPGA