How does current flow in this path when all points are at the same potential?

If the potentials at points A,B,C .. etc are at the same potential as the battery wrt the ground, how does current flow then?

I'm lacking something fundamentally so it would be helpful if someone could correct my mistake.

Also where exactly does the voltage drop occur(from 12V to voltage across the bulb)? Does it occur immediately when the bulb's terminals come in contact with the wire or does the 12V gradually decrease till it reaches the voltage of the bulb? 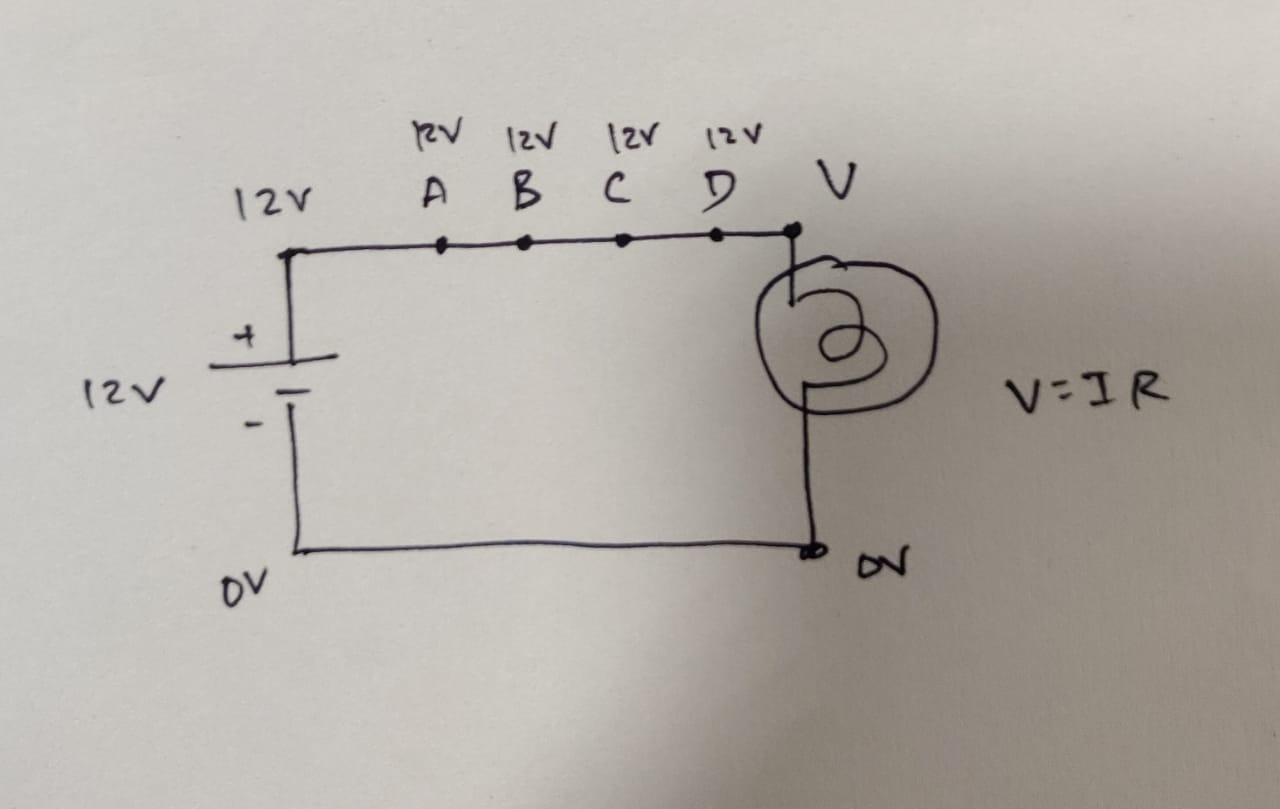 In real life, the points are not exactly at the same potential, since wires have some very small resistance. However, for many situations, it is fine to consider the wire having zero resistance, which means that electrically, points A, B, C, and D are the same voltage because they are the same point. More precisely, they are all the same node.

If you want to, you could consider the case of the wires having some resistance, and then take the limit as the resistance approaches 0 (if you are familiar with the concept of limits). By Ohm's law, you have \$V = I\times R\$, but when R equals 0 and V also equals 0, you have \$0 = I \times 0\$, which actually has an infinite number of solutions for \$I\$, any value can work.

Added based on your question in the comments:

In terms of cause and effect, the battery voltage is the only source of power here, so take that 12 V across the battery as a given. Everything else happens because of that. Now, whatever is connected between the battery terminals will have 12 V across it, and current will flow based on Ohm's law (for a resistive load like this one). One possible flaw in your reasoning is that current doesn't actually need to flow for a potential difference to exist. If you break the circuit anywhere, a 12 V difference will be across the break, though no current will flow. There would be 0 V across the bulb.

In this circuit, assuming the wires are low-valued resistors and the bulb is a high-valued resistor, Ohm's law applies because of the material properties of the elements. So V = IR, but the cause and effect relationship here is that voltage is causing current. It would be the other way around if you had a current source instead of a battery/voltage source.

All that being said, though, for introductory homework problems they usually want you to assume that all wires have exactly zero resistance and are a single electrical node. This circuit would be the same as connecting the bulb directly to the battery with no wires.

Voltages and currents are related, so you can calculate them from each other and the system should be self-consistent. What the equations don't tell you is cause and effect, which I think is what is confusing you. Many of the statements you just made in your comment are slightly wrong -- not entirely wrong -- but just wrong enough that it is not a paradox. A voltage drop is exactly the same thing as a potential difference, and there can be a voltage difference without any current flowing in general. There will be a voltage drop of 12 V across the wires+bulb because the battery is always exactly 12 V -- that is the initial cause. Ohm's law then tells you that current will flow at a rate proportional to the voltage (the constant of proportionality is called the resistance). Ohm's law does not tell you why this is the case though, just that it is. If you are willing to take Ohm's law as true (and willing to assume that the battery is a perfect 12 V voltage source), the result is that a current of \$I = \dfrac{12\text{ V}}{R_{wires} + R_{bulb}}\$ will flow through the wires and the bulb. The voltage across the wires can be calculated again using Ohm's law as \$V_{wires} = I \times R_{wires}\$.

So that's all fine, but I'm guessing that you are probably still unsettled about needing to accept Ohm's Law as true without any explanation. You want to understand the internal workings of the wire and why it follows Ohm's law. I'm not probably the right person to answer that, but I did find some interesting quotes from a forum post at ResearchGate called "Are there causal relationships in Ohm's law? If so, which is the cause and which is the effect?" Here are a few quotes from there:

Abdelhalim Zekry:
...
LET us now go deeper and investigate the conduction mechanism in an ohmic resistor such as metallic wires. ON applying a voltage V across a circular wire with cross sectional area A and length L , an electric field E=V/L will be established in the wire.Due the electric field a force F will be developed on the the free electrons in the conductor. consequently they will be l accelerated and because of forces, the frictional, forces their velocity will reach a steady state value. These moving electrons with the steady state velocity constitute the measured current in the resistor. We see that the motion of electrons on response due to applied electric field resembles the motion of masses in a frictional medium.
...

Jacques B Sombrin:
Ohm's law is an approximation of Maxwell's equations, which is valid under the hypothesis that light speed is infinite, so that current in the resistor and voltage across the resistor appear at the same time, irrespective of the length of the resistor. I don't think this approximation can be used to determine causal relationships.

There is another potentially useful answer on the Physics StackExchange site: https://physics.stackexchange.com/a/195024/ that shows how Ohm's Law is related to Maxwell's equations (I think!).

The largest part of the voltage drop will occur along the filament of the bulb.

If you were to measure ON the filament you would find that one side is 12V, the other is 0V and if you measure in the middle you will find 6V.

However, your assumption that points A, B, C and D are all 12V is incorrect. Wires have resistance (unless you are working with superconductors) and there will be a slight drop in voltage across the wire. but it should be very small in a well designed circuit, because wherever there is a voltage drop and a current flow there will be power lost to heat (good in the filament, useless in the wires). A might be 11.999999, B 11.999998, C 11.999997 and so on.

As for measuring the 0V wire...

To measure any voltage you need to choose a reference. There is no correct/wrong choice but in your case to best understand the circuit your reference should be close to the battery - connection.

Current flows from - to + (because electricity is movement of electrons, which are negative) and will flow wherever it can, much like pressurized air/water will flow through a network of tubes to wherever it can.

Not the answer you're looking for? Browse other questions tagged voltage batteries current circuit-analysis or ask your own question.

174
How does the current know how much to flow, before having seen the resistor?

1
Would any current flow when batteries and resistors are set up like this?
1
Two deep-cycle batteries connected in parallel by a single terminal
4
Potential difference and current flow
0
How does current flow in this circuit
1
Current flow between points with the same voltage (same node)