Cannot make a couple of HT12E & HT12D work properly together

I have built the following setup, which pretty much comes from the specification documents of the HT12E & HT12D thelselves: 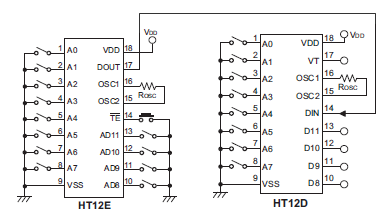 I am using Vdd=5V, Rosce=1M and Roscd=51K. There's also a LED with its anode connected to VT, its cathode to a 470 resistor and from there to ground. The A pins can be either connected to ground or left open, with the same configuration on both ICs. All AD pins on the HT12E left unconnected. VT normally has a voltage of 0V. Now, when connecting TE to ground, the LED lights and VT goes to almost 5V. If the A pins on both ICs do not match then VT stays low. If the AD pins are all connected to Vdd the LED also lights.

Up to here is the behaviour which I was expecting. However, my first concern is that in the previous setup, having left all the AD pins unconnected, the D pins remain with a voltage of around 0.3V. I was expecting all of those to go high, to something almost 5V.

My second problem is that as soon as I connect any of the AD pins to ground, the LED will not light, VT will stay low, and again all the AD pins will remain unchanged - so, even worse.

I have capacitors close to the power pins of both ICs and am using short wires - around 10 cms. I have also tried attaching the D pins to the input pins of an SN74HC125N (4 buffers), and connecting its outputs to LEDs, with no improvements with the results.

Any idea about what might I be doing wrong? Have I missunderstood the specifications somehow?

It appears my ICs were malfunctioning, at least the HT12Ds were. I ordered a brand new set from another supplier and the setup works as expected.