I have a Fender Deluxe Reverb Reissue guitar amplifier that hums whenever I turn on the reverb. It sounds like loud 60 cycle hum. The reverb effect is still applied, but is accompanied by the hum.

Here's what I've observed about the hum:

-The hum persists even if the reverb tank is disconnected

-If I turn on the vibrato, the effect is applied to the hum as well (in other words the volume of the hum is modulated according to my vibrato speed/depth settings)

Here is a full schematic: 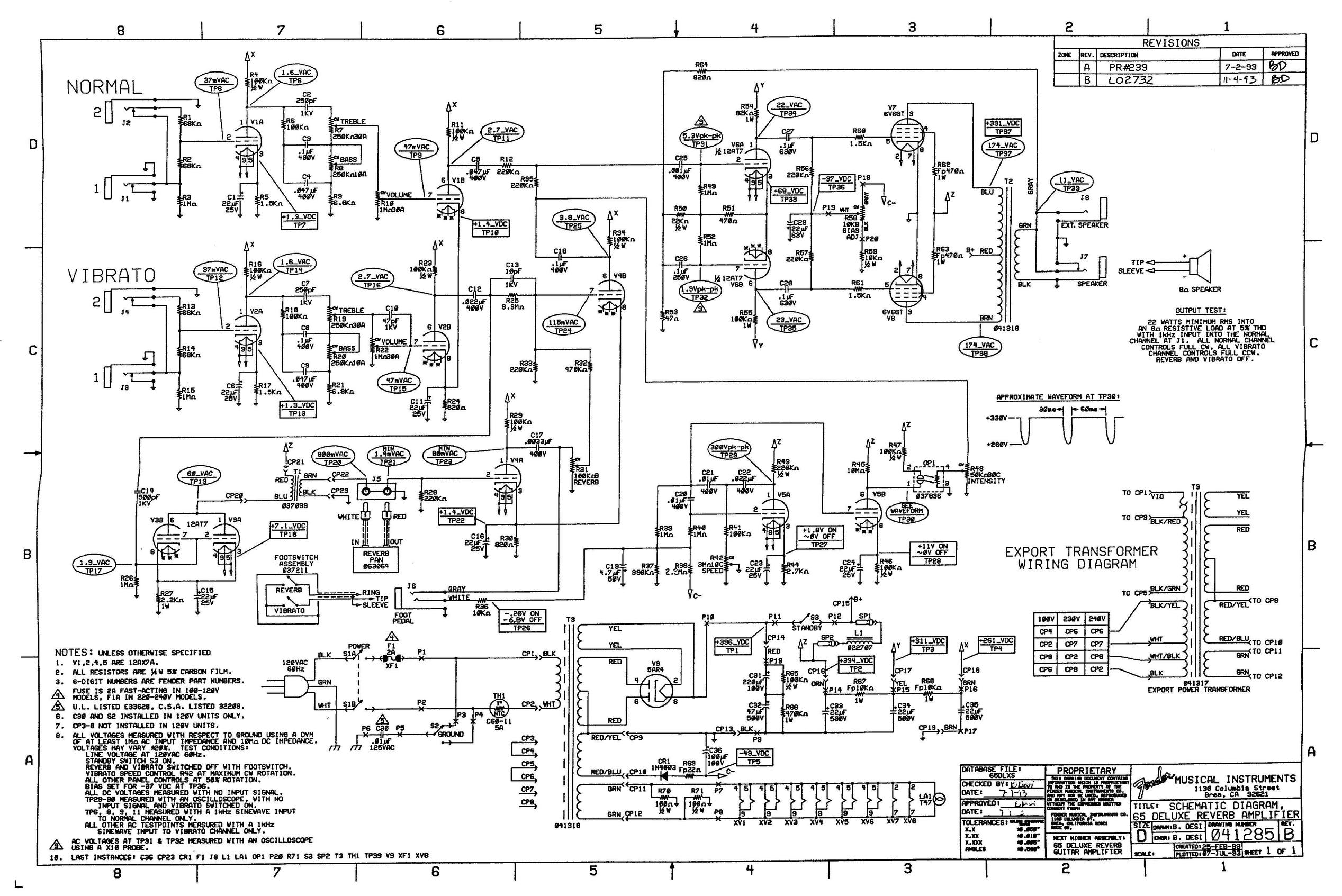 And here is the reverb circuit:

Because it still hums when the tank is disconnected, and goes away when the footswitch is pressed, I have isolated the possible source of the hum to this portion of the circuit (after the return from the reverb tank and before the point that the footswitch grounds i.e. pin 3 of the reverb pot): 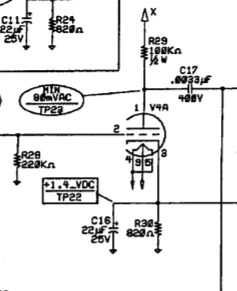 So I went thru with my multimeter/component tester (after discharging the capacitors) and tested all the passives here. Nothing looked abnormal although I didn't measure ESR or anything, just capacitance and resistance.

I tried replacing all of the tubes as well. I haven't tried powering this thing up and taking any measurements yet, I want to try to do as much as I can with the thing discharged first.

I suspect the last tech who was in here made a mistake when recapping and doing repairs. There are some questionable solder joints in here, the connection to the plate of one of my power tubes was hanging on by a thread!

I've tried to clean up some of the solder joints and clip some leads that were left unclipped etc just to rule out the physical stuff.

Does anyone have any advice on how to further troubleshoot this issue? Maybe someone has an idea of where this hum might be coming from?

UPDATE: Per Lars's suggestion, I shorted the reverb return to ground and the hum still continued. So now it's looking like the problem is in that gain stage in the above screenshot.

UPDATE 2: C17 seems to have higher than usual ESR, will replace it and test again.

UPDATE 3: With a brand new C17, the hum continues.

UPDATE 4: Probed around that gain stage for DC voltages and compared to what's written in the schematic. TP22 (the voltage at the cathode of V4A) read 1.4V just as expected.

UPDATE 5: The hum is much louder when the footswitch is plugged in. I'm starting to suspect the footswitch or something in that area. I noticed the footswitch's cable has no shield, just a few insulated wires.

UPDATE 6: Rewiring the footswitch with shielded mic cable significantly improved the hum! Now it is pretty faint unless you turn the reverb up all the way (with or without the footswitch, makes no difference now).

Ordering new capacitors for the power supply to try to troubleshoot the rest of the remaining, more subtle, 60 and 120 Hz hum.

Resolved! In fender reissues put in a NOS mullard 12at7/ecc81 into V3....clean tubes pins first though.

There are many different ways that you can get hum in an amplifier, and its hard to troubleshoot without the amp at hand. But generally; hum can enter in three ways: Directly, inductively or capacitively coupled.

Looking at your case; did you try to short the reverb return input at the amp when disconnecting the reverb. If the hum is still present, the problem is in the V4A stage. (shorted cap etc...). If not, you could have an open R28, a bad cable or a broken tank. The tank would be most likely of the three. (Yes, the tank can be faulty and still give sound.) Did you try to connect the send to the return directly? What did you get? Even if the hum is still there with the tank disconnected you still have an open input that would pick up hum capacitively. This would be the same as a corresponding fault in the tank or the cable. Good luck!

It turned out that the loud 60Hz hum was a result of using a footswitch whose cable wasn't shielded (not the original FS). This allowed the long cable to pick up 60Hz hum inductively from nearby power cables and couple them directly into the rest of the circuit. The high impedance of the V4A plate and surrounding resistors made it particularly susceptible to hum.

Rewiring the FS with shielded mic cable almost completely eliminated the hum to the point where you can hardly hear it unless you turn up the reverb all the way (and even then it's very faint).

For good measure, I replaced all the capacitors in the power supply as well to try to eliminate any remaining hum. Now the amp is nice and quiet (until I play of course). I also went ahead and cleaned all the pots which got rid of crackle.

Thank you to Lars for guiding me through this troubleshooting!

Here are some clips so you can hear for yourself:

Not the answer you're looking for? Browse other questions tagged amplifier vacuum-tube guitar-amplifier tube hum or ask your own question.