Three legged NOT gate? What is this symbol?

I've come across the above schematic in a datasheet for a 4x2:1 bus switch. What exactly does that triangular symbol on S mean? It looks a lot like a NOT gate, but the third leg is confusing me.

It is a gate with an inverted and a normal output. The idea is that the two outputs switch exactly at the same time. There is hardly any delay between them.

The symbol as shown in your diagram is rather awkwardly made. More often the following symbol is used for a combined buffer + inverted like that:

You will find these used with differential line drivers.

The following diagram has an issue that the S input bypasses the inverter. 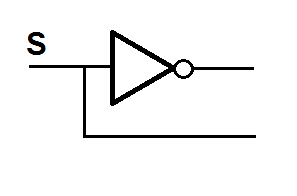 If this logic was used as depicted, the gate connected directly to the S input would switch a fraction faster to the new state then the one which uses the S-NOT from the inverter.

Most manufacturers don't bother with that sort of details. Here is a typical diagram of a 4 output de-mux: 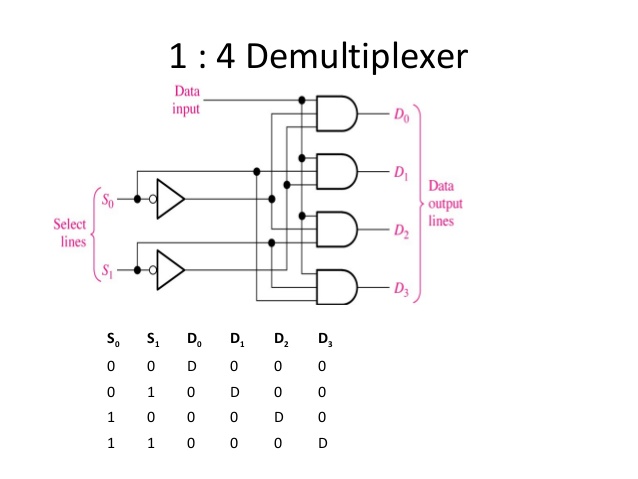 That is a very ambiguous symbol. It probably means that the buffer has both an inverting and non-inverting output. As Tom Carpenter comments it goes to the input of another gate so it must be an output.

There are two common variants of buffers. 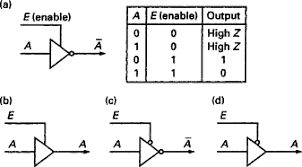 Not the answer you're looking for? Browse other questions tagged switches logic-gates or ask your own question.

2
IGBT Logic Switch
0
NJM2072D Application Questions for Audio Detection Circuit
42
What is the purpose of a buffer gate?
1
Is it D-Type Flip Flop?
0
What does two input and one output buffer like gate do?
3
Arduino Self Power Circuit
0
Not gate that differentiates between 0V and GND
0
Logic gates in a schematic
0
Is this actually a good CMOS NAND gate?