Is Texas Instrument wrong with their pin number on TO-92 package?

The official JEDEC standard to number pins on a TO-92 package is the following: 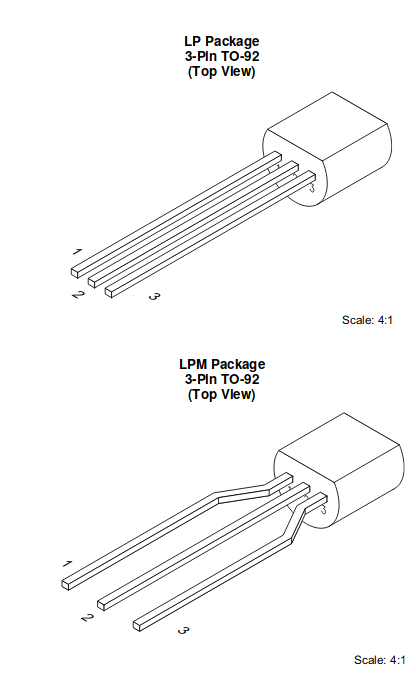 But in many datasheets from Texas Instruments, this order seem reversed. For example, this is a screenshot from the datasheet for the LM185 : 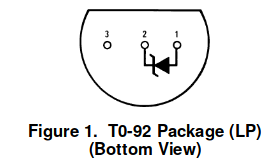 Texas Instruments's official TO-92 documentation doesn't help since there is an ambiguity as if the drawing is from the top or the bottom : http://www.ti.com/lit/ml/msot002d/msot002d.pdf

In all the datasheets where the pinout is reversed, they used a view from the top or the bottom. In some datasheets the pinout is correct, but they used an isometric view which eliminate all ambiguity. This could be the source of the confusion, but I just don't see how I could misinterpret "Bottom view" or "Top view" for a TO-92 package.

Is Texas Instruments wrong or I don't understand what a bottom view is?

To prove that this is not an isolated mistake in a single datasheet, here are few links to some Texas Instruments datasheets where this happen :

The LM385 was originally produced by National Semiconductor. The earliest reference I can find is from their 1980 Linear Databook. It shows the same 'wrong' pinout. Other manufacturers whose datasheets have the same pinout include Motorola and Telcom Semiconductor. 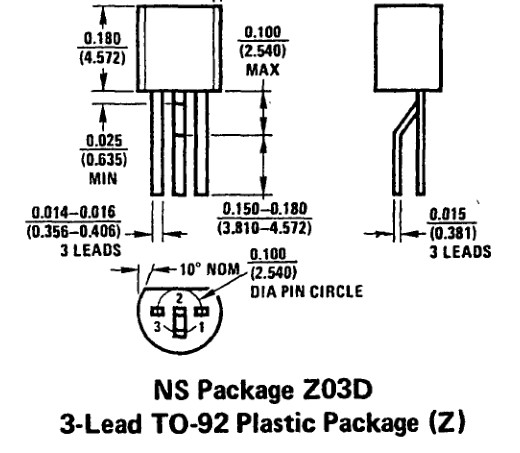 I don't see any ambiguity in any of the datasheets, and the only one that disagrees with the conventionally accepted numbering scheme is the first one. The others show the pins in solid lines (not dashed) so they are clearly bottom views.

By the way, TI was not the originator of the LM385 chips, rather they bought National Semiconductor. You can find the same numbering scheme on NS datasheets, for example here. The part is rather old, the same pin numbering is shown on page 2-47 of NS's 1982 databook (the oldest one I happen to have on hand), it probably dates back to some time in the 1970s. The databook refers to NS Package number Z03D, and you can find a datasheet for that package here

A relevant question might be when (or even if) numbering for the TO-92 package was standardized. I don't recall it being standardized during those years, instead we would use E-B-C or similar letters for the pin designations.

For what it's worth, alternate sources of the LM385 et al may disagree on what number to use for a given pin, but they certainly agree on the pinout, however you number them. The part is somewhere in the range of mature to obsolescent in life cycle so it's not much to worry about provided you follow one data sheet and don't mix datasheets.

You could hunt down the JEDEC TO-92 standard yourself. I've included the link, but you need to register (for free).

Yes, TI disagrees with JEDEC. But as long as your board works, does it matter?

Not the answer you're looking for? Browse other questions tagged datasheet pinout or ask your own question.

3
Where is the oscilator in the 555 chip provided here?
0
TLC59116 (Y59116) maximum output current
1
Input current in an ic
0
What is Vcc-2 referring to in the Texas Instruments Tech Sheet for the SN74AS138?
0
How to understanding min/max input values of Schmitt Trigger from datasheet
1
How high is the TLC5940?
2
what is the difference between voltage output swing at no load vs at 10k load?
0
Polarised vs non Polarised Capacitor
0
Maximum Clock Input Frequency Datasheet Confusion