I'm trying to become re-acquainted with S parameters, VNA, and transmission lines for some projects at work. I'm using Agilent, Advanced Design Simulator, to practice on the computer and to get the basic theory down and try to really get the feeling of it. I'm simulating some basic circuits and using the built in VNA to look at the results. Below are the results of a simple band stop filter, resonant at 5Ghz. There the Smtih chart represtation of S11 and S21 next to a magnitude and phase plot of each.
My question is, how do I interpret S21 on the Smith chart? S11 makes sense to me. At 5Ghz on the Smith chart, the impedance, Z is at about infinity, so the reflection coefficient, Γ = 1. So all energy from 1 goes back to 1, which the magnitude plot agrees with.
For S21, the magnitude plot makes sence, because it goes to 0, meaning no energy from port 1 is appearing at port 2. However, I don't understand why the Smith chart would show 1 + j0 at the 5 Ghz point.
It looks like for S11, the chart plots the impedance, from which the reflection coefficient is calculated, that represents S11. It seems to me that the impedance looking back from port 2 would be the same.
Unless it is meant to mean the impedance from port 2 to port 1, which in that case it seems to indicate that the ports are matched, in which case I would expect maximum port transfer, which of course is not the case. 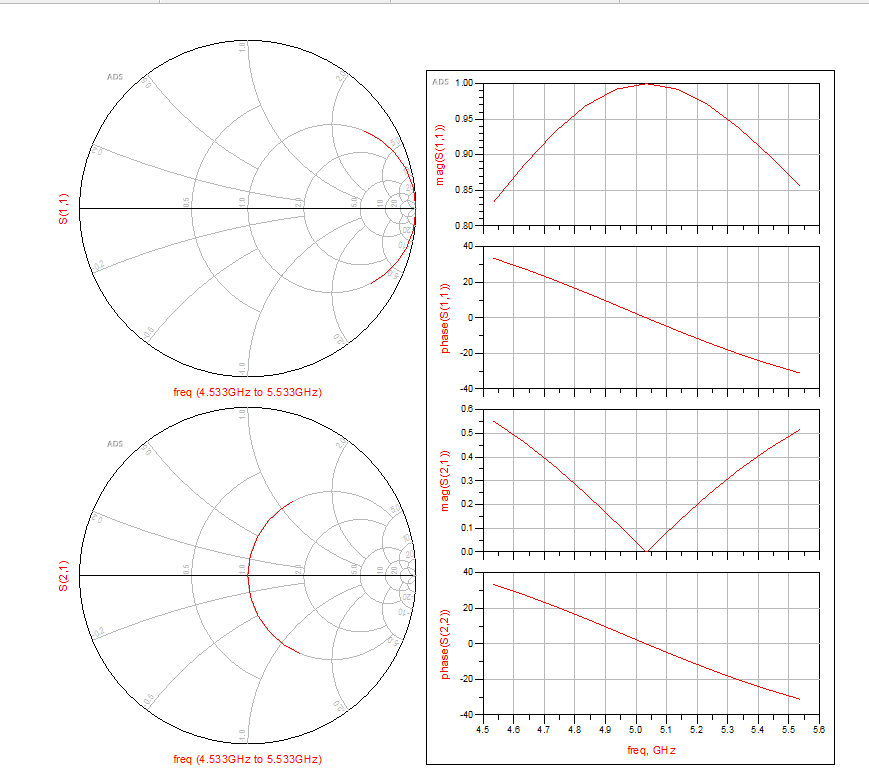 It looks like for S11, the chart plots the impedance, from which the reflection coefficient is calculated,

The way the Smith chart works, if you took the lines of the Smith chart away, and put ordinary polar coordinate lines on the chart instead, these lines would give you the reflection coefficient.

If you then go back to the Smith chart lines instead of the polar coordinate lines, you have the impedance.

In paper and pencil days, you'd use a compass and protractor (or angle markings printed around the perimeter of the chart) to plot the reflection coefficient onto a pre-printed Smith chart. Then the Smith chart lines would give you the impedance without having to do any tedious calculations.

For S21, the magnitude plot makes sence, because it goes to 0, meaning no energy from port 1 is appearing at port 2. However, I don't understand why the Smith chart would show 1 + j0 at the 5 Ghz point.

The Smith chart isn't really meaningful for transmission paramters (\$S_{21}\$ or \$S_{12}\$). Just plot these parameters on an ordinary polar plot, not a Smith chart.

But if you're plotting a transmission parameter, the only thing that's special about this point is that transmission is 0, which you would see more clearly on a polar chart than on a Smith chart.

Not the answer you're looking for? Browse other questions tagged s-parameters vna smith-chart or ask your own question.

0
How do I see the resonance of a high-impedance coil with a VNA?