I've designed and implemented LED Dimmer driven by PWM from Adruino Pro Micro (CLONE) with software based on MySensors library.

See the schematic attached below. 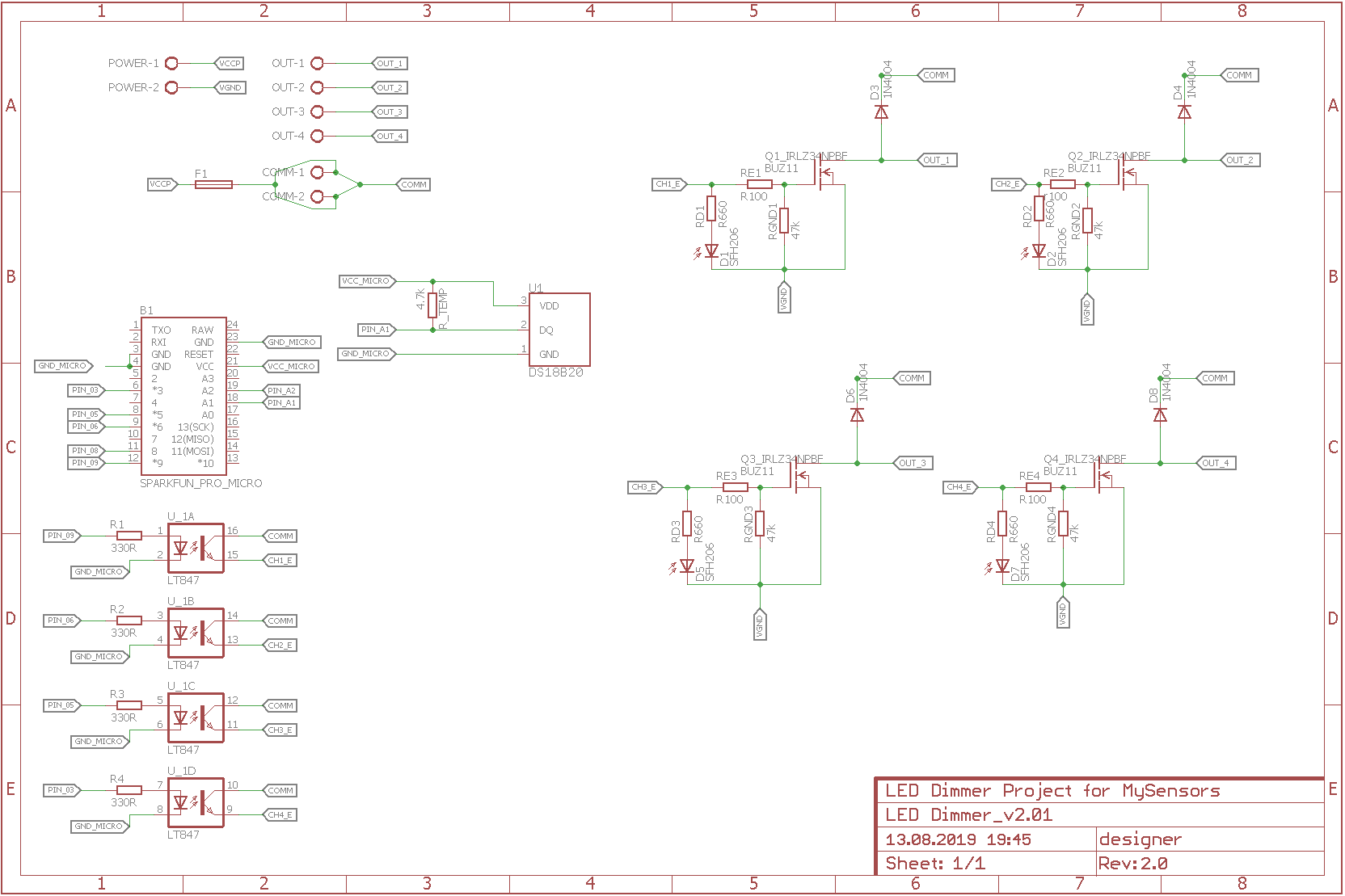 The idea is really simple:

Generally I am - or was - satisfied with how it worked, as all worked well (all integrated and managed by domoticz).

This happened after few weeks (I guess 1 month...) of using the dimmer, dimmer started working properly after turning it off and on (unplugging power supply). I noticed that temperature of the environment where dimmer was placed was around 33degree celsius (it remaind more less same for the mentioned period).

What is the matter? Is it something with the circuit? If so, what shall I change in it to avoid situation as explained? Is there anything I could add here to make the description more clear?

In situations where something has worked for a long time (days) and has suddenly stopped, it can be difficult to tell exactly what happened. As far as flaws with your circuit (that would make it suddenly stop working after a month), the photodiode is the biggest thing that looks weird to me. Not to mention (from a terminology standpoint) "Comm" or Common generally isn't used for "power".

My suggestion would be to put a scope/ voltage probe on the output next time your design acts up. It could be that the power supply had an issue totally independent to your circuit.

If the problem is too sporadic, try simulating your design in something like LT spice and sweeping operational parameters and temperature to make sure nothing is biased on the limit.

Based upon your question, it would appear that you had one channel set to a particular dim level, and the other three channels were off. If the one lit channel was maintaining it's dimmed level prior to your resetting the circuit, it would indicate that the PWM was working properly, and that the controller was simply ignoring or not responding to commands.

That fact, combined with the fact that repowering the circuit caused it to start working properly again, indicate that this would likely be some sort of software/controller issue, and not a problem with the output portions of the circuit that can be picked apart by examining the schematic.

If your serial link to the PC is bi-directional, you may want to consider echoing the values of your variables to the host PC and log them there

When something stops after around 5 minutes, you should check your micros() calls. When this happens after a month, millis() can be suspicious. So check out Baldengineer's millis tutorial about rollovers: https://www.baldengineer.com/millis-tutorial.html

(I would, but your code is not here.) I guess your code tries to reach a millis value that's not happening any time soon (maybe next month). For the future put this into your code snippet collection or something (easy to screw up, hard to debug if you need around a month to check):

Please note that if you don't need a 1/16th celsius precision, most Atmel uCs have internal thermometers you can use for this exact reason (to check if your stuff overheated or not). Also I couldn't find where PIN_08 and PIN_A2 are connected. Maybe to your PC?

Not the answer you're looking for? Browse other questions tagged arduino led mosfet dimmer or ask your own question.

1
Sending IR signals to Robosapien using Arduino
4
Arduino pro Micro Communication Issues
1
Using optocoupler with MOSFET for dimming a LED
2
Multipurpose momentary button - microcontroller/arduino - Which mosfet to use?
3
Connecting two LED stripts with individual power sources to one MOSFET
2
Help reverse engineering PWM Dimmer Flicker-less mod
3
Will a LED strip be less bright when I drive my mosfets with 3.3V instead of 5V?
1
Why does my LED not blow out when overpowered by my Arduino?
0
ws2812 strips data grounding method & flickering