How can I describe and explain SMPS on a very basic level without diving down in heavy maths / EE lingo?

I'm writing a book about repairing electronics. The audience level for the book is "very little knowledge about electronics" and it's mostly about the mindset and mindtools for finding problem sources and how to correct them. It's not buried in maths or anything like that, as it's not a electronics book per se.

That being said, I'm currently a bit stuck on the current chapter about power supplies. I've been describing the very basics of linear supplies (fuse, graetz-bridge, filter cap, regulator, output cap), where error sources most commonly appears, et cetera. I think I've managed to capture the spirit of the linear supplies, but I have a very hard time describe SMPS on a very basic level and this is what I'm asking for input of.

I could slam the reader with block diagrams, schematics and describe the basics of this very complex topic, but I'm afraid I will miss the audience the way I've been trying to pinpoint it all. There's an awful lot of maths and electrical engineering behind SMPS but I want to avoid all that and just show-and-tell the very spirit. Showing a schematic like the one below (not mine) will only boggle the reader, I think, but somehow I have to highlight at least one schematic and point at which components fail most, etc.

How can I express myself about this topic, on a basic level? 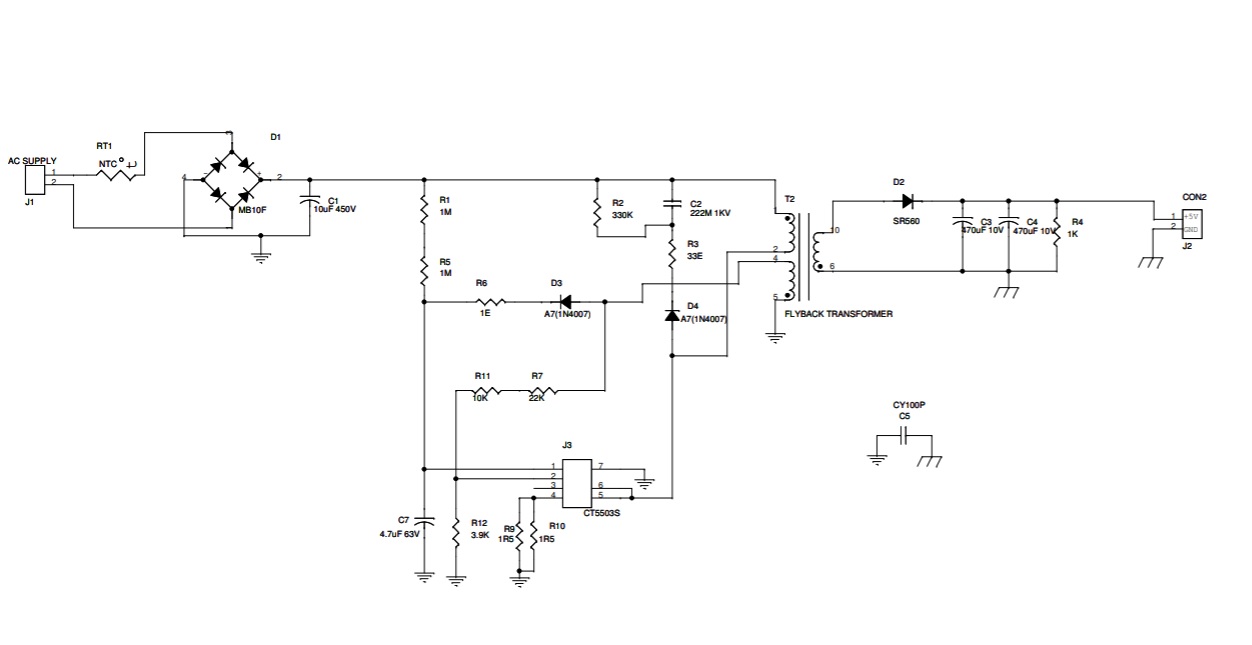 I'd recommend trying to describe a simpler circuit than the one you posted in your question.

A buck converter is a much simpler SMPS. It is also DC-DC, so you don't need to worry about AC rectification:

In a buck converter, the output voltage is less than the input voltage. I might describe it this way:

You could get more detailed if they already know about inductors:

When the switch closes, current starts to flow through the inductor to the load. Eventually, the voltage on the load will reach the supply voltage. But, say you open the switch before that happens?

Well, if there was no inductor, the voltage at the load would simply disappear whenever the switch as open. But the inductor makes it so that the current flow tapers off instead of abruptly stopping. Where does this current come from? It's "pulled" through the diode!

Another refinement is to explain how the inductor stores energy in its magnetic field, which is what keeps the current flowing when the switch is opened.

An additional approach is to use the water analogy. It isn't perfect, and the analogy normally fails when describing a SMPS, because electrical current doesn't have momentum as does water flowing in a pipe. But the inductor creates something very much like electrical momentum! (which I think is very cool, by the way.)

The basic-basics: input -> magic -> output, except the magic part doesn't violate the laws of thermodynamics, so power out = power in * efficiency. Meaning you can't get 10 watts out with one watt in, for example. It explains why a boost converter generates high voltage/low current on an output with low voltage/high current on the input, it explains why a buck converter does the opposite, and if you think about it hard it even explains why pretty much any switching supply with a regulated output has a negative input resistance.

After that: inductors are like tired children that don't like changing the speed they're moving (i.e. the current flowing through them), and they'll complain (with voltage spikes) if you try to change current rapidly. So most switchers work by getting current to build up in an inductor, then switching a transistor off suddenly which makes the inductor voltage change polarity and drive that current into something (originally a diode, but usually another transistor, these days) that puts it somewhere useful.

At the end, if you think you can do it without making people's heads explode, you can explain transformers and flyback converters and whatnot.

Short answer: if you can't explain inductors to your grandmother, then you cannot explain switching power supplies. Can you explain resistors? Capacitors? Yes? Well, first you have to "own inductors," and understand them as totally as you understand resistors, but without math and without lingo.

Most people understand resistors, but less about capacitors, but then have little understanding of inductors (understanding besides equations, or knowing how to use simulations. That's not 'understanding'.) To truly understand inductors, you must see them in your mind, see them working, as if all the invisible parts were visible.

If you visualize an inductor as a coil sitting on the workbench, but you don't every single time visualize the short-circuit between the terminals, then you don't understand inductors. (That's as bad as always viewing capacitors with a shorting-wire between their terminals. A shorted capacitor is not even a capacitor at all. A shorted-out capacitor is heresy, an abomination. Same as an open-circuit inductor.)

Inductors are flywheels. They are closed-loops, like a spinning wheel, or like a closed pipe-donut, full of water, with the water in rapid rotation. Inductors store charge-inertia, like a superconducting coil with no power supply. An ideal inductor is storing a loop of current: charges going in a circle, forever, with the inductor terminals shorted together. (Just as an ideal capacitor stores strained charges, the positive and negative held separated, forever.)

First SMPS lesson: what happens when you have a spinning bicycle wheel, and suddenly you jam a stick between the spokes? BOOM! Giant forces appear suddenly, the wheel halts, and the stick shatters. That's the SMPS "boost" principle: get your wheel going fast, then suddenly insert a stick (open the switch.) By suddenly blocking the flywheel, we can create a giant voltage. But it's a brief voltage. So, store it up, using a diode and a capacitor.

A battery, and inductor, and a switch, that's a high-voltage power supply. No need for step-up transformers.

You have already described linear power supplies transformers rectifiers and smoothing capacitors, then you are half way there.

A switch mode power rectifies the mains to give a high DC voltage. This voltage is then "switched" or converted back to AC at a high frequency. The high frequency AC is reduced in voltage using a transformer and this low voltage AC is rectified to produce low voltage DC.

Speaking of being hazardous to health your book should contain a safety warning about poking around in the high voltage side of SMPSs. They can contain large capacitors charged to high voltages, a hazard even when the mains is disconnected.

The short answer is, break it into smaller pieces, show how each one works, then tie them together as a system and show how they interact.

Have a look at this video as an example of a simple, but thorough walk-through of a switch mode power supply. https://www.youtube.com/watch?v=KIilQrgJ-gg

Not the answer you're looking for? Browse other questions tagged power-supply switch-mode-power-supply theory or ask your own question.

2
SMPS minimum rating / type calculation - how?
0
Can a battery powered circuit experience input voltage overshoot on turn-on?
1
Building smps- pwm isssues
6
What is this RC local feedback configuration?
0
Grounding and unisolated power supply
5
Is it possible to use Microchip's ZCD (Zero cross detect) circuitry in an isolated SMPS?
0
Could a blown voltage regulator still supply electricity?
0
If I use a 19V 4.7A supply to a MAX 250W ATX power supply am I an idiot or should it be safe enough?